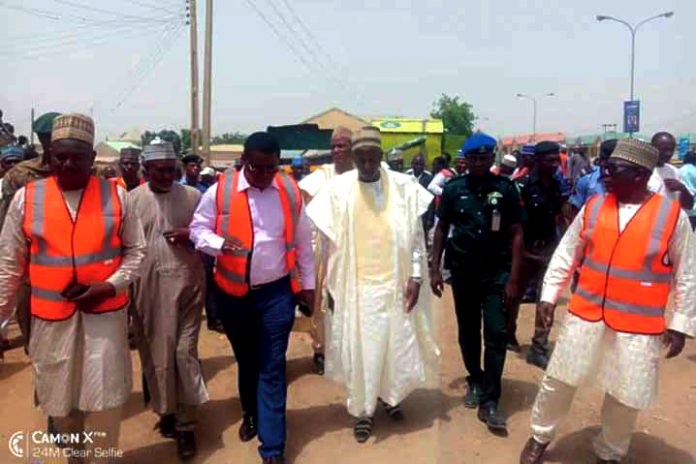 The Nigeria Erosion and Watershed Management Project (NEWMAP) was born in 2010 following the request for assistance made by the then President, Dr. Goodluck Jonathan to World Bank.

In Anambra, it is a lesser task to count which communities are not affected by the erosion crisis, rather than the ones that have been impacted by the menace. Recently, the Anambra State Commissioner for Environment, Felix Odumegwu, an engineer, indicated that over 70% of the state’s landmass is under severe threat of gully erosion. Well, that is how catastrophic the problem is. It’s a disaster of humongous proportion by any standard of measurement.

With financial commitment in the order of US$900.0 million and a target closing date of June 2022, having commenced on the ground about 2012, the ten years are already up, and it is time to look back and evaluate the impact of the programme. It is understood that over 1,558.62 hectares of degraded land were reclaimed in the first seven years of the programme. Leveraging on the successes of the programme, additional states have been listed to partake in the programme.

It is also understood that Dr. Sanje Srivastava of the World Bank, having given a thumbs up for the NEWMAP has indicated that another programme with the pseudonym ACRESAL, which stands for Agro-Climatic Resilience in Semi-Arid Landscape may continue from where NEWMAP stopped.

This is a welcome development and the assistance from the World Bank under whatever pseudonym must be appreciated and should be complemented by the Federal and State governments.

Though the success of NEWMAP has been sung repeatedly, it is the responsibility of the programme coordinators to critically assess the outcomes and the way forward with the anticipated ACRESAL or other similar intervention schemes.

Whatever the gains of NEWMAP may have been, one would think that the greatest legacy the programme would leave behind is capacity building. That is the ability of home-grown engineers, surveyors, geologists, biogeography, and other allied disciplines that have participated in the programme to have acquired the requisite knowledge to tackle such challenges going forward. It is also the responsibility of the programme coordinators to monitor the long-term performance of the finished projects.

This will enable them to document what works and what does not, as such is a critical part of any project life cycle. Such learning helps in the design and delivery of future projects. Unfortunately, such learning or performance behaviour has never been reflected in the ad-hoc solutions implemented at the Nanka landslide. Peripheral drains that never worked have always come back as a primary remedial solution, hence the monumental loss of materials on the bare walls of the slide.

Based on a 2014 Google image, which shows the site with approximate dimensions of 600mm wide at the top and about 105m deep at one of the accessible x-sections and site observations, between Amako Nanka and Oko communities, it was estimated that up to 300,000m3 of materials may have been lost on the Oko face of the gorge after few cycles of the rainy season. At the time of the estimate, a failed peripheral drain was discharging runoff directly unto the bare batters of the near vertical faced gorge. The non-cohesive (friable) nature of the native soils and the high rainfall intensities in the area played into a cocktail of potent variables driving the active landslide status of the site.

Shown in the photo below is a half-symmetry view of the exposed near vertical soil columns on the Oko side of the gorge. Despite the disastrous consequences of the failed Ronasco drains built in the eighties, a contract worth over one billion nairas that was centred on the construction of a peripheral drain on the Nanka side was ongoing during my last visit to the site in 2012. Due to these significant failures, the Nanka landslide has been a subject of intense discussion and debate and has been a recurring decimal in the ‘to-do list of various government agencies dating back to the seventies.

With NEWMAP on its way out and ACRES a likely replacement intervention agency that may come on board, the Anambra State government should make this a priority site. This time around, NO PERIPHERAL drains as a focal point of remedial solutions should be embarked upon. It is obvious that the Nanka erosion is a classic case of government policy gone wrong coupled with the failure of engineering and science.

These answers were echoed during a stakeholder’s workshop in 2012 when the then minister asked me if the problem could be attributed to juju. The problem at the site has been largely misunderstood. There is no way the exposed vertical column of soil at the site, which flagrantly disobeys the laws of statics and limits equilibrium concepts could have been remediated using peripheral drains.

The failures at the site typify what is technically regarded as a progressive type of failure. No matter how strengthened peripheral drains may have been, it is only a matter of time before they are eaten up. Such drains should only be secondary or complementary, supporting a robust solution that is rooted in sound engineering.

Without a doubt, with good engineering that understands the concept of suction (negative stress), effective stress principles, pour water pressure and soil reinforcement, the mass wasting at Nanka could be turned around for the best. Among numerous opportunities, the space could be turned into parkland with or without restricted use. Restricted use as parkland, if the State could take advantage of the deep gorge which has truncated the water table for harvesting potable water.

A small weir or dam following the reinforcement of the sides of the gorge should be given a serious thought. What of a borehole field, as the groundwater table, is shallow as evidenced by the perennial base flow in the gorge? By and large, the site could be recovered and put to good use. It has been left for too long, thereby resulting in what has been hitherto referred to as the ‘mother’ of all erosions.

·        Ezeajugh is a civil engineer and geologist with a PhD in Particulate (Soil) Mechanics. He is a chartered engineer of the Institution of Engineers, Australia, a member of COREN and a Geotechnical Engineering Consultant. He contributed this piece from his head office in Brisbane Australia (www.groundenviro.com.au)