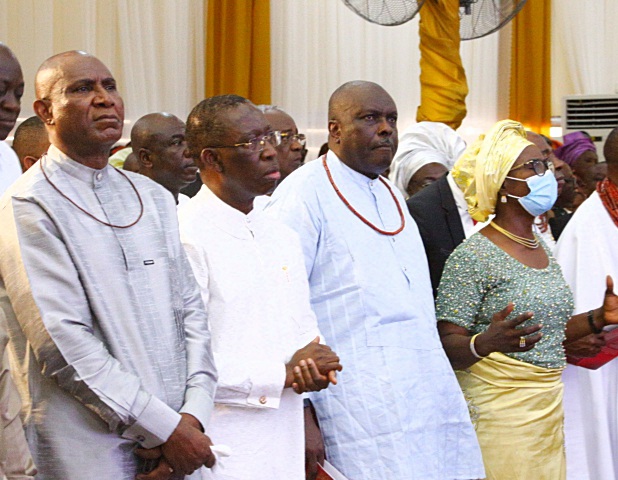 The first coronation anniversary of the Olu of Warri, alliance Atuwatse lll has ended with thanksgiving at the palace chapel of the monarch in Warriwith who is in attendance.

Others were Speaker of the State House of Assembly, Chief SheDrf Oborevwori, Dr. Emmanuel Uduaghan who was represenMrsby his wife, Mrs. Roli Uduaghan; Chief Kenneth Gbagi; Chief Great Ogboru and the Dein of Agbo Kingdom, HRM, Dr. Benjamin Ikenchukwu Keagborekuzi l among others.

In a sermon, the founder and Presiding Pastor of the Word of Life Bible Church, Pastor Ayo Oritsejafor underscored the importance of thanksgiving, saying that thanksgiving throws the gate open for more blessings from God.

Oritsejafor who congratulated the Olu on his first coronation anniversary called on him to continue to lean on God for divine direction that would enable him to take the oil city to enviable height.

The clergyman said Warri had the potential of becoming the Dubai of Africa if stakeholders and government at all levels contribute towards the peace and overall development of the city.

“Thanksgiving opens the gate for more blessings; it brings you into the presence of God for divine favour through which, God flavours our labour.

grateful are not greatful, you will become a great fool. We must learn to emphasise the importance of thanksgiving in our daily life,” Pastor Oritsejafor added.

Pastor Oritsone-time was a one-time President of the Christian Association of Nigeria (CAN), advocating for a paradigm shift in the orientation of youths in contemporary Nigerian society towards hard work which, he said, was a springboard for sustainable sTHE success in life.

Highlight of the ceremony where prayers were said for the Olu of Warri, Delta State and Nigeria at large, was a special thanksgiving to God by the monarch who was accompanied by Itsekiri Chiefs as well as sons and daughters of the Itsekiri kingdom.

Dogara Working For Atiku, Bitter For Not Selected As APC Vice-Presidential...

Julius Berger  Inducted As A Premium Member Of Nigeria-British Chamber Of...