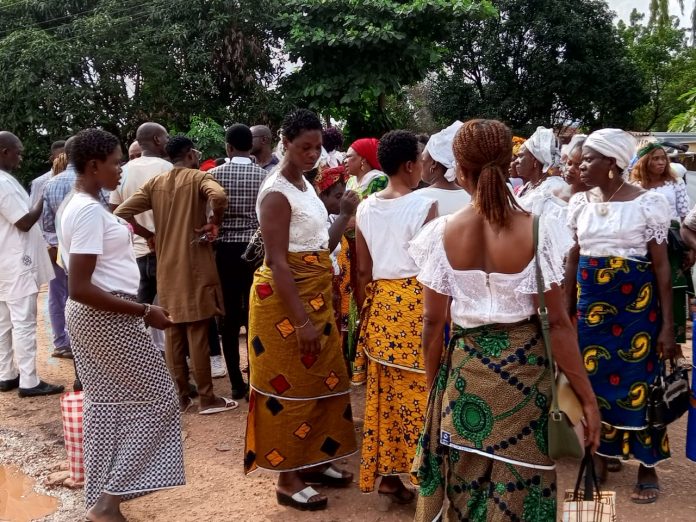 Men of rhe  Ebonyi State Command of Ebubeagu, the South-East security network on Saturday shut down the venue of the August Meeting of women of Ebonyi State under the aegis of Federated Ebonyi Women Organisation billed to hold at People’s Club Abakaliki.

Federated Ebonyi Organization is a non-political organization that is made up of 17 women groups in Ebonyi State.

Our Correspondent reports that the operatives of the state’s security outfit had stormed the venue early hours of Saturday and dispersed the women who were already at the venue waiting for the event to commence and also confiscated all the chairs, tables and canopies mounted for the event.

They also arrested some boys who were mounting the canopies and setting the chairs at the venue.

The development led to the cancellation of the programme by the women.

Angered by the action of the local security operatives, the women later took to the streets to protest the disruption of their meeting, and called on the Inspector-General of Police (IGP), FILDA, and other rights groups to intervene on the matter.

The statement reads: “The hard-working, Peace fostering women of Ebonyi State under the aegis of Federated Ebonyi Women Organization, were on this day 20th of August 2022, unjustifiably attacked, embarrassed and chased out of the venue of their 2022 Annual August Meeting slated to hold in People’s Club Hall, Abakaliki.

“This abominable act was carried out by the Executive Governor of Ebonyi State, Engr. Dave Umahi, through his attack dogs, the Ebubuagu Security outfit of Ebonyi State.

“It is not new or alien to the Igbo Race that the entire women meet every August to discuss and chart the best possible developmental ideas and projects to improve the well-being and welfare of our people.

“notably Athe annual August Meeting is not a partisan gathering as it cuts across party lines and even involves women who never belonged to any political party. It is surprising therefore that the Governor knowing the importance of this annual gathering for the women and the society at large, facilitated this dehumanizing attack on this year’s August Meeting that has the approval of all relevant security agencies.

“These attacks are unreasonable and unwarranted infringements on the constitutional rights of the women of Ebonyi State which must not be tolerated.

“As mothers, we will speak to our sons and husbands to be in solidarity by standing with us in this protest against dictatorship.

“Despite the hardship meted on the women of Ebonyi State through his unproductive leadership, he further attacked our women on this auspicious day, thereby subjecting us to suffering.

“He has infringed on the rights of the entire Ebonyi Women and should be liable.

“For unjustifiably attacking and humiliating our women in this sacrilegious manner, Ebonyi women hereby call on the Inspector-general of Police and civil rights groups to come to our aid by ensuring that Governor Umahi’s agents whom he used to perpetrate these crimes are brought to book while Umahi’s militia known as Ebubeagu Security Network should be disbanded by the federal government.

“Ebonyi women want to remind Governor Umahi that he once galvanised support through this usual Annual August gathering event when he needed votes to ascend; and that he should refrain from actions that will pitch Ebonyi women against his political party which Governor Umahi is angry with because of his disgrace in the APC presidential primary.

“Finally, Ebonyi women are encouraged that he should know that only votes count now and that THUGS will not count and may not vote. Long Live Ebonyi.”

When contacted on phone, Special Security Consultant to the State government, Chief Stanley Okoro Emegha, said the operatives received security intelligence that unknown gunmen were planning to use the place to attack the state.

He vowed that those arrested would be prosecuted. END//

Why There Are Churches Everywhere But No Salutory Impact

Waje Drops New Single ‘Who Am I’