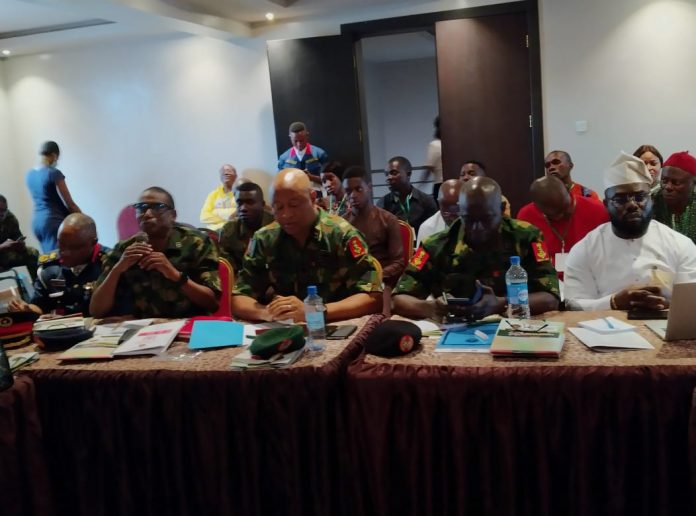 Nigeria’s Chief of Army Staff, Lt – Gen Faruk Yahaya has cautioned the media to refrain from glorifying insurgents and other bandits.

He said information management, especially as it related to the security of the nation was paramount which featured prominently at the 22nd Edition of the Social Media Influencer Seminar organised by the Army Headquarters Department of Civil-Military Affairs in Conjunction with Security Affairs Limited held in Benin City, the Edo State Capital.

The Seminar with the theme, “The Nigerian Army’s Non-Kinetic Lines of Operation: Critical Roles of the Social Media”, is aimed at Strengthening the Nigerian Army’s Civil-Military Cooperation and curbing the menace of fake news syndrome.

The Chief of Army Staff, Lt – Gen Faruk Yahaya, while addressing participants, appealed to media houses, social media influencers and bloggers to refrain from headlines and reportage which tend to undermine the efforts of the military in fighting insurgency and general insecurity.

Such acts, according to the Army and y Chief, give credence as well as boost the morals of the perpetrators to commit more crimes and atrocities.

Lt – Gen Faruk Yahaya, who was represented by the Chief of Civil-Military Affairs, Major General Markus Kanye, said the social media seminar was one of the several ways the military seeks to interact with the civil populace to foster civil-military cooperation and rob minds and find ways to curb the social menace of insecurity as we all have roles to play in the promotion of peace and security in our nation.

” What we say and the way we say it and how it is spread on the social media has far-reaching implications on the country’s security environment stressing that social media plays a crucial role in promoting peace and shaping public opinions”.

Yahaya also pointed out that in a bid to foster civil-military cooperation, the Military in 2010, established the department of Civil Military Affairs which has carried out a lot of skills acquisition programmes as part of its corporate social responsibility aimed at winning the hearts and minds as well as bridging perceived gaps between the Nigeria Army and the Civil populace.

” In the last five years, the military has carried out more than one thousand impacts related Civil- Military projects across the country aimed at bridging the gap between the military and the Civil populace while also projecting the image of the military”, he said.

Also speaking, Major General Kelvin Aligbe, Commander, Operation WHIRL STROKE HQ Loc Makurdi
advised media to be guided by the principles of social responsibility pointing out that disparaging remarks and statements about the military in social media were unpatriotic.

On when terrorism will end in the country, he said it is difficult to determine when insurgency will come to an end in a country, stressing that,” nobody can put a terminal date on insurgency but at a point, there are bound to be a reversal of trajectory of narratives as already seen by the mass surrendering of Boko Haram insurgents in Nigeria”

Speaking on the theme ” Leveraging the Social Media as a Non-Kinetic Tool in Joint Operations Environment Imperative of Civil-Military Cooperation, Brig Gen. Folusho Oyinlola, said before a Journalist publishes his or her story, the person should ask the vital question,” who does this story benefits? Is it the individual, the terrorists or the state or who does the story injure at the end of the day?

He, therefore, advised that responsible headlines should be adopted in such a way as not to glorify the insurgents.

A certificate of participation was presented to every participant at the end of the seminar.