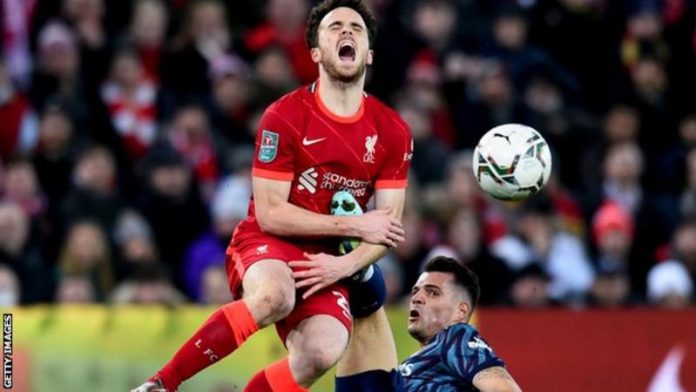 Jamie Carragher has slammed Liverpool’s ‘unforgivable’ mistake of not being prepared for a derby after Monday’s 2-1 defeat at Manchester United.

The Reds conceded either side of half-time courtesy of goals from Jadon Sancho and Marcus Rashford, and despite Mohamed Salah’s header on 81 minutes they were unable to find an equaliser.

Defeat makes it three games without a win now following draws against Fulham and Crystal Palace.

Jurgen Klopp’s side were rattled by an aggressive United team from minute one and looked shell-shocked under the raucous Old Trafford atmosphere, with the likes of Trent Alexander-Arnold and Virgil Van Dijk struggling.

And former Liverpool defender Carragher has said it is ‘unforgivable’ that the squad were unprepared for the intensity of a clash with their rivals.

“The disappointment for me was that Liverpool wwasn’tady for the game and fe that’s unforgivable,” Carragher told Sky Sports.

“I love this team and what they’ve done over the last five years and you can’t throw that at them but it’s happened too often this season, it’s happened twice where they don’t look ready for a game.

“That’s something that will be worrying Jurgen Klopp. Tonight was a different game where they had 70 per cent of the ball and United did that to Liverpool tonight where they’ve looked intense.

“The intensity was night and day compared to Liverpool.”

BOOK REVIEW: Alex Ekwueme’s Wisdom From The Beyond