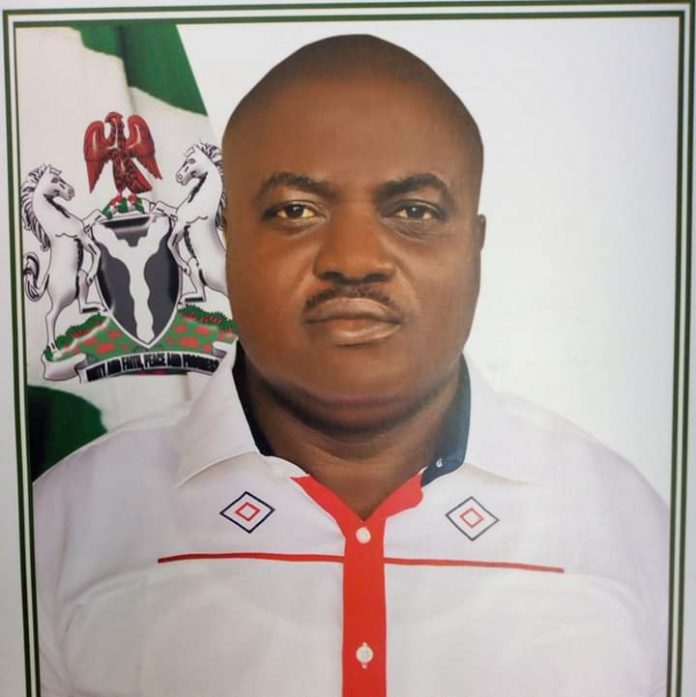 The Chairman of Ishielu local government area, Ebonyi State, Chief Sunday Eze, has flagged off the construction of a 4km road in the Egedegede/Nkalaha community of the council area.

Egedegede, Nkalaha and Obegu communities were attacked by herdsmen last year and over 17 natives were reported killed while many houses and other valuable property were destroyed. The road links Ebonyi and Benue States.

Our Correspondent reports that the road when completed will ease the transportation of Agricultural produce by the farmers in the area.

Before the intervention of the Council Chairman, the sorry State of the road had subjected the natives of the area to untold hardship, as it was impassable.

Eze while flagging off the construction of the road on Wednesday, said part of the reasons he was constructing the road was to further demonstrate to the people of the area that his administration was committed to alleviating their plights orchestrated by the last year’s herdsmen attack.

He noted that the road would be constructed with rigid concrete pavement to ensure its durability.

He said: “We are here to flag off the construction of Egedegede/Nkalaha road. Before now, the terrain was too bad, it was impossible for people to go home. We have finished earthwork here during the dry season, and after that, the state Governor graciously approved the construction of a 3km road among that rural road project the state government wants to embark on.

“But I want to start so that the governor will continue from where I will stop and we are happy that the project has started today.

“These people, Egedegede and Nkalaha have boundaries with Benue State. People can access Benue State within a few minutes when we finish the construction of the road. From here to Benue State is not up to 10km. from here to the junction is 4km.

“When we finish constructing this road, farmers will be able to sell their farm produce, that’s the most important thing and they are well-to-to people, but the access road to transport their agricultural produce was their problem but when we finish the construction of this road, it will address the problem.

“For almost six years now, Senator Obinna Ogba has been including this road in his constituency projects. But we have not seen anything done and we cannot keep waiting for him, but when he leaves office, we will ask questions about it, we will ask him questions. We have to ask him what happened.

“We want to tell the people that we have not abandoned them. The people were attacked by herdsmen and they lost their dear ones in that incident last year.”

The Town Union President of Nkalaha community, Ikechukwu Onwa said peace had returned to the community after the herdsmen attack that occurred last year.

“Immediately after the attack, the governor through the Council Chairman set up a vigilante and they work day and night to make sure there is no problem in the community again.

“The herdsmen killed 17 persons in this Nkalaha community and they have all been compensated. Motorcycles that were burnt have all been replaced.

“The construction of this road will help us a lot. In August last year, nobody crossed this road, it was very impassible but with only the grading lateriting, you can go to our market and come back without any problem. Our people are happy for the alternating alone, let alone the concrete road that is coming”.

A Trip Of Tradition, Commitment To Cooperation — The 32nd Visit...