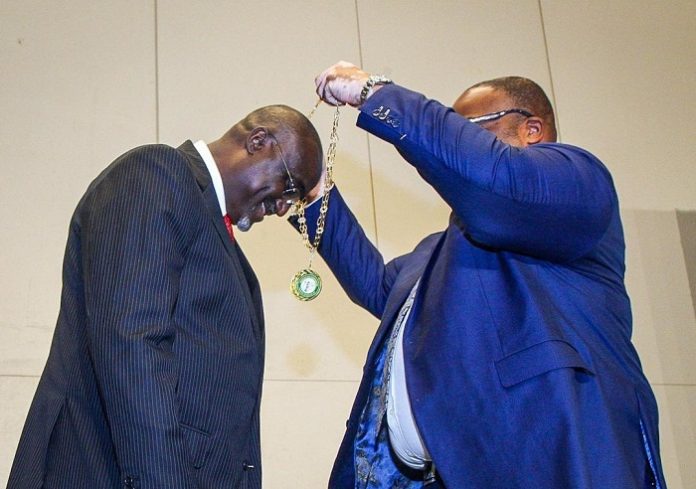 •As Akpata Bows Out Of Office

The newly sworn-in President of the Nigerian Bar Association (NBA), Mr. Yakubu Chonoko Maikyau has called on the Federal Government to show more commitment to the protection of Nigerians’ lives and properties.

The 31st President of the NBA popularly called Y.C Maikyau made this call during the handover and inauguration ceremony where he was sworn in as the new president of the association.

The swearing-in ceremony was held at the Eko Hotel and Suites in Lagos on Friday after the conclusion of the NBA annual general conference before a large number of lawyers.

The new NBA president who is a Senior Advocate of Nigeria emerged as the winner of the election, which was held on July 16, 2022, and conducted through e-voting and lasted for 24 hours.

According to Maikyau, Nigeria is passing through a perilous time, the insecurity challenges appear so overwhelming, adding there has been no time that Nigerians have looked towards the bar than now.

“Nigerians have been so terrorised and what is left of this country is the voice of the legal profession and this voice must speak against the terror in the land. I commend the security personnel for doing so much with apparently so little.”

He said that legal practitioners must do all that is within their ability to serve the cause of justice during the forthcoming general election in 2023.

“While we shall stand with the cause and do everything to protect the interest of the bench, we will also not hesitate to call our erring lawyers as well as the bench to order.”

In his inaugural speech, Maikyau further thanked his predecessor and those who supported him during the campaign and voting process where he emerged as the president.

“I am committed to building all the projects our past president initiated. You did a lot for the Nigerian bar and we are proud of you, the bar is now known for what it should be known for, and we thank you for the turn around as we all are able to see today.

“I also thank all our colleagues that we contested together and we are extending the hands of fellowship to each and every one of you; we looked forward to welcoming all the good ideas in your manifesto and consulting with you. I promised to deliver on the mandate of the NBA,” he pledged.

Earlier, the past president of the NBA, Akpata gave assurance that the NBA will continue to protect the cause of the society and make Nigeria a better place through its section, Nigerian Bar Association Special Public Interest and Development Law (NBA-SPIDEL) under the leadership of Dr. Monday Ubani.

Akpata noted that many things are holding the country back as a nation, stressing that the NBA is the only association that is reflective of the country.

President of the Court of Appeal, Justice Monica Dongban-Mensem, who was represented by Justice S. Saidu, said she looks forward to a healthy working relationship between the court and the bar.

2023: Ojudu Says Refusal To Support Tinubu In His Presidency Quest...

Zulum Launches 300 Bicycles To Ease Transport To Schools In Villages

Customs Intercepts 389 Parcels Of Cannabis, Other Contraband Worth N60m