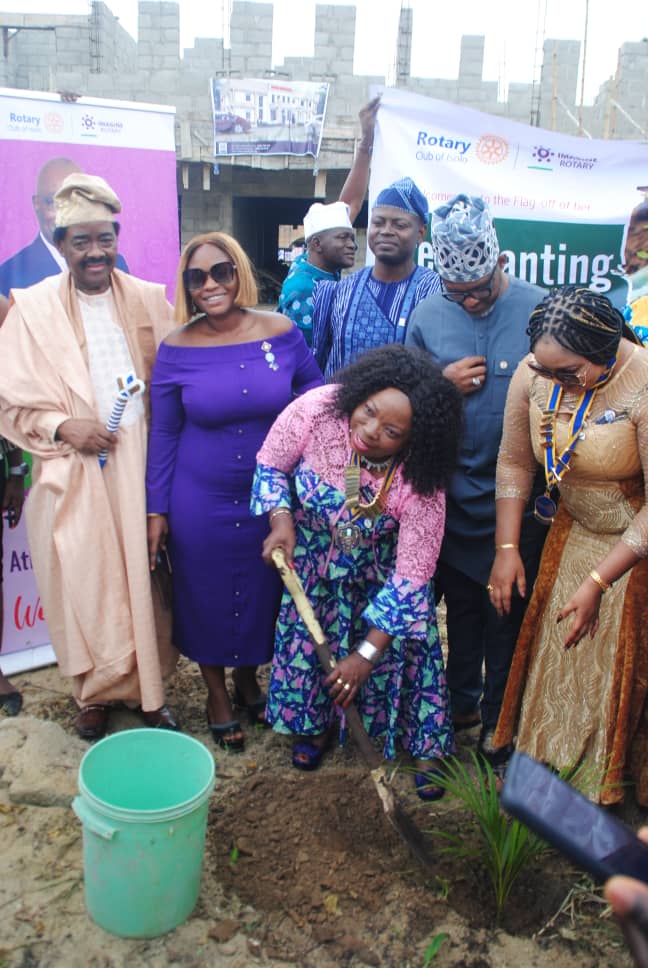 No fewer than 50 market women will benefit from the Rotary Club of Isola’s interest-free micro-credit facility of N1 million.

The club also as part of its empowerment programme in collaboration with Inner Wheel Club of Isolo trained and empowered fashion designers, hair stylists, hairdressers and barbers in the area.
The beneficiaries went home with their various equipment.
The club also launched a free eye test, donation of free eyeglasses, and free Cervical Cancer and Prostate, Cancer tests at the Isolo General Hospital.
Rotarian Omotunde Lawson, the Imaginative District Governor of Rotary International, District 9110, Nigeria, while speaking at the inspection of the ongoing building of the cervical cancer project donated to Isolo General Hospital by Rotary Club of Isolo and planting of trees, at the project site commended the President of Rotary Club of Isolo, Rotarian Atilade Femi Oshoniyi and the entire members of the club for continually adding value to Isolo community.
She also commended the leadership style of the first President in Diaspora, Rotarian Oshoniyi for his selfless service disposition to the general good of the society.
“Despite the distance between him and his club, it is very evident that Rotary Club of Isolo is a club to be reckoned with.
She said that the construction of the Cervical Centre Commenced last year under the leadership of the Immediate Past President, Rotarian Tejumola Taiwo and that it is scheduled to be completed before June next year under Rotarian Oshoniyi.
Speaking, further on the President of the club that is in Diaspora, the District Governor noted that Rotarian Oshoniyi stunned her with his passion to complete the Cervical Cancer Centre with his contribution of millions aside from raising funds through sponsors over there in the Atlanta United States of America.
Rotarian Oshoniyi, the club President, who spoke virtually, applauded the District Governor, Rotarian Lawson assuring her that he would continue to do his best not only for the club but also for humanity generally.
Also, speaking during the event the Vice President and President-Elect, Rotarian Abimbola Oseni lauded the support of her club members including, Rotarian Oshoniyi which according to her, resulted in the success of the District Governor’s visit.
In his remark, PDG Michael Olawale-Cole said the 40-year-old club will continue to grow in leaps and bounds as he expressed optimism that Lawson and Oshoniyi would have excellent tenure.

Why Nigeria Will Continue To Experience Very High Housing Deficit–Agbelogode