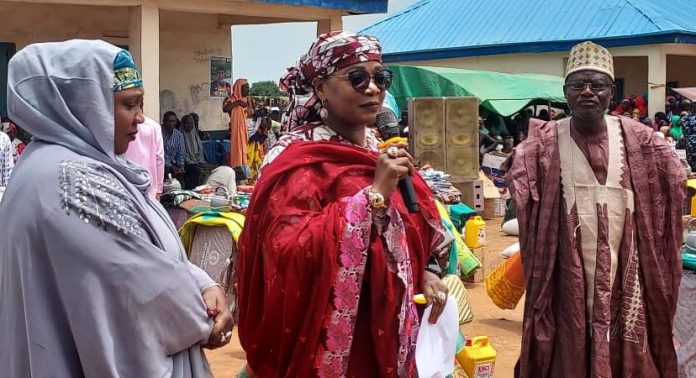 Governor Abubakar Atiku Bagudu of Kebbi State has said President Muhammadu Buhari has made tremendous investments in security from 2015 to date.

The governor also noted that a lot of tangible progress has been recorded during the period under review particularly on the welfare of Internally displaced persons across the country.

The Chairman of the APC Governors’ Forum spoke on Saturday,at Ribah, Danko Wasagu Local Government during the Flagg off of distribution of assorted relief materials to IDPs by National Commission of Refugees, Migrants and Internally Displaced Persons this Saturday.

According to Bagudu, the gesture by the federal government was very commendable.

The Kebbi state Governor further said that security challenges were not only peculiar to Nigeria or the state.

He lauded the resilience and patience of the people of the state, as well as urged them to continue to be their brothers’ keepers.

Bagudu vowed that the people of the state would not be cowed down by a few unscrupulous elements who were bent on tormenting the law abiding citizens of the country.

He again urged communities to complement the efforts of the three tiers of government and the security agencies.

According to him, Kebbi State was not doing badly in terms of the prevailing security challenges. Peace he said, was gradually returning to areas affected by banditry in Zuru Emirate.

He acknowledged the courage of farmers in the state, saying that bumper harvests were being recorded in the state.

‘ Our farmers are resilient and continue their cultivation, the situation did not deter them ‘, he emphasized.

The Federal Commissioner, Hajiya Imaan Suleiman Ibrahim in her remarks at the occasion said that the relief materials were provided to the IDPs to alleviate their suffering.

She lauded Bagudu for according top priority to the welfare of the people of the state.

She stated that a medical outreach would be conducted in the camp to check the health status of the IDPs.

Earlier in his welcome address, the Chairman of Danko Wasagu Local Government, Hon. Hussaini Bena expressed profound appreciation to the Federal Commissioner for coming to distribute relief assistance to IDPs in the area.

He said such assistance would go along way in reducing the hardship being faced by the IDPs in the camp.

The Director of IDPs  National Commission of Refugees, Migrants and Internally Displaced Persons, Alhaji Musa Muhammad said bringing succour to refugees or those Internally displaced from their communities was the major mandate of the Commission.

The Commission, according to him has mapped out strategies to assist the IIDPsto to reduce their hardship as well as rehabilitate them.

The Chiefdom of Wasagu, Alhaji Musa Muktar while welcoming the Federal Commissioner and her entourage however requested the government to mobilize more security personnel to the area to provide adequate security for the IDPs to return to their homes

He averred ‘ Our people are hardworking and resilient, what they need is not relief assistance but security to be able to go back home and cultivate their farms.

‘ Give them security and they feed the entire state and beyond because they are real farmers.

‘ Most of the refugees you see here are from the neighbouring states who are displaced by the activities of the bandits in their states ‘.

The traditional leader appreciated the myriad of interventions and assistance from the State government to the people of the area since the security crises started which according to him has now reduced.

The State House of Assembly member representing Danko WWasagaWest, Hon Haliru Aliyu, the Sole Administrator of Maga/Kyebu Area Development Council, Hajiya Hafsat Muhammad all expressed gratitude to the Federal Commissioner for the relief assistance to the IDPs in the area.

They extolled governor Abubakar Atiku Bagudu for doing his best to curtail insecurity in the area and providing succour to refugees.

They requested for deployment of more security personnel in the area so people to go back to their homes.

In the same vein, those who spoke on behalf of the IDPs Shehu S/Fawa and Nasara Maigero Women Leader Dankane also made a passionate appeal to the government to assist them to relocate back to their homes and starting petty businesses

The Governor and the Federal Commissioner, before departing, paid homage to the Emir of Zuru, rtd Major General Muhammed Sani Sami, Gomo 11 where the Commissioner expressed delight with the visit and show of concern from the political and traditional leaders of the area.

She informed the Emir about her mission to the state while also commending the Governor for his unwavering commitment to alleviating the plight of the IDPs in the state.

Governor Abubakar Atiku Bagudu while thanking the Commissioner for the visit also thanked the Emir, religious and community leaders as well as the security for their support in dealing with security challenges in the area.

The Progressive Governor’s Forum Chairman expressed concern over the poor condition of roads in the area. He announced that the state Government would repair the Zuru/ Ribah road as soon as the rainy season ends.

The monarch commended the Commissioner for coming to Abuja to bring succour to IDPs  He also appreciated the effort of the governor toward the general development of the state particularly in dealing with insecurity.

According to him, the efforts of the President, the Governor and the security agencies have positively resulted in the gradual return of peace to the area

The Governor was accompanied by the former Governor of Jigawa State, Ibrahim Saminu Turaki, Acting Head of Service, Safiyanu Garba Bena, the Deputy Speaker, Kebbi State House of Assembly, Rt. Hon. Usman Ankwai, members of the house of assembly from the area.