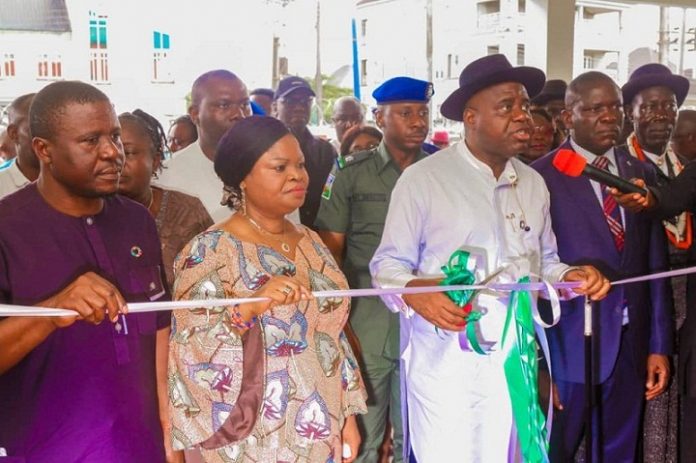 Governor Douye Diri of Bayelsa State has said the collaboration between the Nigerian Government and states is the panacea to attaining the United Nations Sustainable Development Goals (SDGs).

Diri spoke at the inauguration of a 100-bed mother and child hospital built through a partnership between the Office of the Senior Special Assistant to the President on SDGs and the state’s SDGs office at Azikoro town, Yenagoa, on Monday.

He noted that no government can function in isolation without the support of the other, and commended President Muhammadu Buhari, for approving the health facility in the state.

The governor in a statement issued by his Chief Press Secretary, Mr Daniel Alabrah, said the project, which is named Dr Aisha Buhari Mother and Child Hospital, would address infant and maternal mortality.

He explained that although the state had a similar facility, it had to be converted to a COVID-19 centre at the height of the pandemic.

Diri expressed the hope that the facility would be beneficial to the people of the state, describing it as one of the fruitful results of the state’s collaboration with the federal government.

He thanked the Senior Special Assistant to the President on SDGs,  Adejoke Orelope-Adefulire, for ensuring the completion of the edifice.

“This is not the first mother and child hospital in the state. Chevron built a similar facility at the Bayelsa Medical University but during the height of COVID-19, we had to convert it to a COVID-19 hospital. Since then, we have had the need to provide for our mothers and children till this opportunity came and we grabbed it.

“Even when the temptation came for me to site this project in my community, l looked at the indices of the population and its proximity to our mothers and I said it must be domiciled in Yenagoa.

“This facility will be very beneficial to us as a people. In fact, for me, this is one of the best things that has happened to us as a state. But like Oliver Twist, we look forward to collaborating for more.

“Now our women and children have a place for safe delivery. They will no longer patronise traditional practitioners but take modern treatments and medicines.

“The facility is equipped with state-of-the-art equipment you can find anywhere in the world. That is why I am very happy. Please express our appreciation to Mr. President for this collaborative effort and for doing this for our mothers and the children.”

Earlier, the Senior Special Assistant to President on SDGs, Adejoke Orelope-Adefulire, appreciated the president for providing the necessary support that ensured collaboration with the Bayelsa government, which fast-tracked the projects under the SDGs.

She equally thanked Governor Diri for supporting, cooperating and implementing SDGs in the state, adding that the hospital is equipped with an ultra scan room, ICU for both children and mothers, and laboratories among other facilities.

In his address, the State Focal Person and Senior Special Assistant to the Governor on SDGs, Ebiwari Wariowei, thanked the governor for providing the state’s counterpart funding for all SDGs projects and programmes, which according to him, amounted so far to N3.5 billion.

Peter Obi: As Tough As Nails

Taking 100 Million Nigerians Out Of Poverty Not Only Responsibility Of...