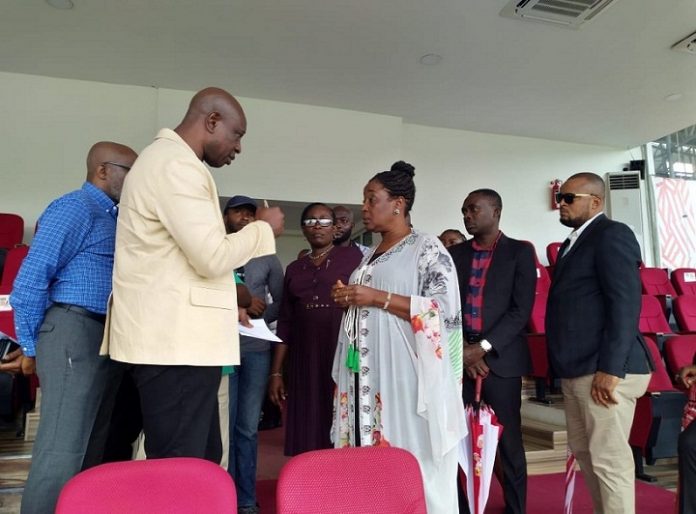 Mrs. Betsy Obaseki, Wife of Edo State governor, while inspecting facilities to be used in her football tournament, named “Betsy Obaseki Football Tournament” kicking off this week in the state, declared that the introduction of the programme is aimed at checkmating the trafficking of young women.

The programme, she said, will also encourage girl-child in earning dollars at home without being trafficked abroad for prostitution,  adding that the winner of the tournament would smile home with N5 million.

According to Mrs. Obaseki, “the whole idea or philosophy behind this programme is a long-standing one.

“You know we have suffered a lot of backlash with human trafficking. We had a lot of our girls going out of the country, but with this current administration, it’s being curbed.

“We were number one worldwide in human trafficking, but now we are in number five or six in the four to five years of the Obaseki’s administration.

“So that says a lot. We are still working hard and pushing, and trying to provide our girls with alternatives for earning dollars and for finding work and building a career and gratifying a meaningful career at home.

“Who knows the century football started worldwide and it is getting stronger and stronger, isn’t it?. This is going to last as long as football exists in the world; by God’s grace”.

The governor’s wife said this year’s tournament would be used to disabuse the minds of young Nigerians on the abuse of drugs.

“We are planning to have soft type seminars, rendezvous and with some relevant stakeholders nationally on combating drug abuse in our country, because every year we come up with a theme.

“It is not just about playing football, we also want to send out messages to our young ones. Last year, it was about promoting girl child education, but this year, we are saying no to drugs.

“We will also invite girl students from our secondary schools to attend and have an interaction with us and go back with some knowledge and more awareness”, she said.

The First Lady of the state, while commenting on the facilities on the ground, said they were of international standard.

“Last year was our first year and even us, who organised it including the participants, were all pleasantly surprised and pleased with the performance.

“It was world-class from day one. You recall that FIFA had an event early this year in Qatar and they recognized what happened here in Edo state and gave the government of Edo state an award and our Deputy Governor, Philip Shaibu went and received it.

“For our first outing to have caught international recognition and acclaim, it says a lot.

“So, really, that is why people here are permanent because they did just a good job last year and they would remain with us for all time.

“There is really little improvement because we did so much last year”, said.