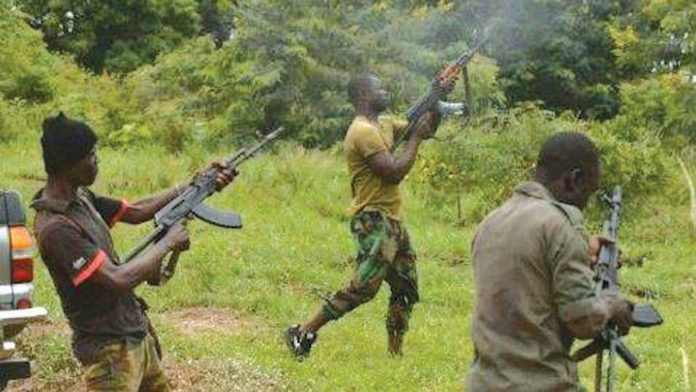 Chief Obiorah Ofole, a shop owner at the New Auto Spare Parts Market, Nkpor in Idemili North Local Government Area of Anambra state yesterday claimed to have escaped death by the whiskers, following three gun shots allegedly fired at him during a protest embarked upon by shop owners in the market.
A group of traders who identified themselves as landlords and shop owners had staged a demonstration in protest against a concluded arrangement by the Chief Elisius Umeozokwere-led executive committee of the market to build new shops on top of the existing ones in the market.
The protest triggered off yesterday morning when to their chagrin the demonstrators saw some contractors trying to start work on the construction of the new shops on top of the existing market shops.
According to the source, the demonstrators claimed that their anger was that the market executive did not carry them along, neither did they have their consent as shop owners before trying to embark on the project.
One of the journalists attached to Kpakpando FM located at Mbaukwu who spoke on anonymous condition, told newsmen on phone that himself and two other journalists attached to Nigeria Television Authority, NTA and Fides, Awka Catholic Diocesan newspaper were manhandled by some brutal vigilante operatives believed to have been stationed by the market executive.
The journalist disclosed that after beating them to stupor, damaging their cameras, removing the memory cards, collecting their phones and monies, the brutal vigilante operatives opened fire on the demonstrators at a close range which made everybody to scamper for safety.
He said the journalists have lodged complaints to the Anambra State Vigilante Group, AVG Headquarters in Awka, before going to answer an invitation from the Assistant Inspector-General of Police, AIG, Zone 13, Ukpo where he said that after listening to all the parties, the AIG, Umaru Musa Muri directed that both parties should put their individual statements in writing and come back today for a round table deliberation.
In his own statement, Ofole, leader of the demonstrators, said the vigilante operatives shot at him three times but he was lucky that none of the bullets got him, adding that it was when he was trying to escape from the bullets infested arena that he fell into a ditch and had a dislocation.
But the Vice Chairman of Nkpor New Auto Spare Parts Dealers Association, Ikechukwu Onyegbu and the Financial Secretary Chief Alexander Orji who spoke on behalf the Chairman, Elisius Umeozokwere, described the demonstration as handiwork of opposition perpetrated by enemies of progress who lost election of the association, adding that there was no violence inside the market yesterday as all the traders were busy doing their legitimate businesses.
Onyegbu and Orji disclosed that the opposition had earlier gone to court against the market executive and lost and are now in Appeal Court, adding that in delivering his judgement, the presiding Judge of Awka High Court, Justice Pete Obiorah vacated its earlier interim injunction restraining the market executive from embarking on the construction of new shops on top of the existing ones.