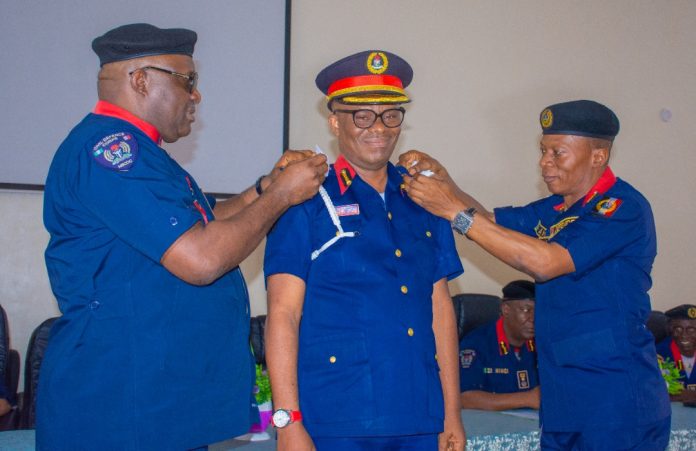 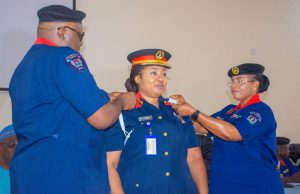 Newly promoted officers of the Nigeria Security and Civil Defence Corps (NSCDC) have been tasked to redouble their efforts and commitments to official duties.

The Commandant General (CG), Ahmed Abubakar Audi gave the charge at the Corps National Headquarters, Abuja, during the symbolic decoration of some of the promoted officers.

He called on them to appraise their inputs so far in service with a view to contributing more to the growth of the Corps through positive attitudes and diligent implementation of its core mandate.

Represented by the Deputy Commandant General (DCG) in charge of Crisis and Disaster Management, Nnamdi Nwinyi, the CG described the promotion as a privilege and not a right and encouraged those who could not make it this time not to be discouraged.

He explained that the criteria for promotion apart from the written examination are the availability of vacancies and the government’s financial capacity and budgetary provision for ministries, departments, and agencies as promotion attracts commensurate pay rise.

He charged them not to be deterred but to continue to work hard as promotion is a continuous exercise and anyone who didn’t get now would surely get in subsequent exercise.

The Commandant General announced that the symbolic decoration exercise conducted at the Headquarters is to be replicated at the various State Commands and other formations of the Corps nationwide.

He appreciated President Muhammadu Buhari for the support and motivation given to the Corps through the provision of equipment, noting that such a gesture among others will definitely translate to effective service delivery.

The CG also commended the Minister of Interior, Ogbeni Rauf Aragbesola, for his tireless efforts toward ensuring high welfare standards for NSCDC personnel.

Responding on behalf of others who were symbolically decorated with their new ranks, Deputy Commandant of Corps, Okere Vincent, pledged that the promotion exercise is a motivation to function optimally and assured of more dedication than before.

The Commandant General reminded the promoted officers that, promotion comes from God, hence, they should see themselves as privileged.

He charged them that, to whom much is given, much is expected, therefore, they should not take the opportunity for granted nor see it as an avenue to look down on their colleagues who could not make it this time around, instead, they should be diligent, put in more hard work and contribute their quota to the development of the service.

He explained that his administration inherited backlogs of stagnated officers and assured that gradually all personnel who have been static on one rank for a long time will have cause to smile in due course.