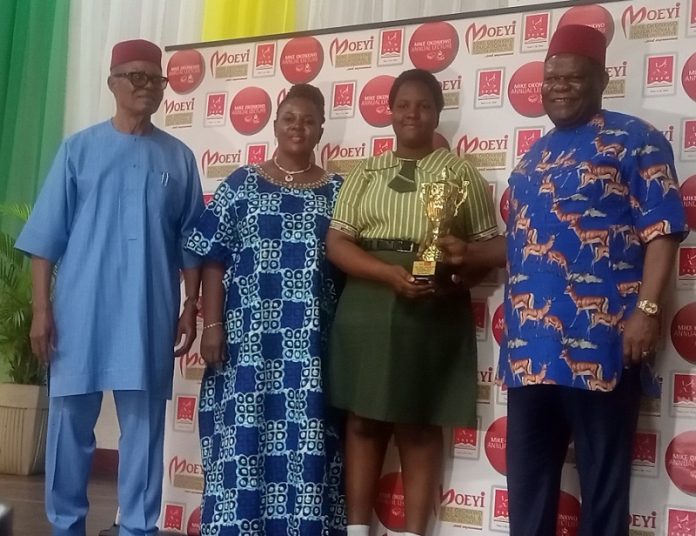 The winners of the 17th edition of the Bishop Mike Okonkwo Annual Essay Competition were on Thursday, at a ceremony in Lagos, presented with their various prizes.

The awards were part of the activities marking the 77th birthday of the Founder of The Redeemed Evangelical Mission (TREM) Bishop Mike Okonkwo, which is usually an annual event.

Cash prizes of N100, 000, N75, 000, and N50, 000, as well as plaques were presented to the first, second, and third winners respectively, while the top three winning schools were presented with computers. Consolation prizes were awarded to seven other contestants who emerged fourth to 10th position.

A final year Senior Secondary School student from the State Senior High School in Ikeja, Ayeni Oluwanifemi Bright, was announced as the overall best in the completion that received over 1000 entries and she received a laptop in addition to the other gifts for the first position.

According to Prof. Akachi Ezeigbo, a professor of Linguistic and the Chief Examiner of the competition, the committee received over a thousand entries from secondary schools across Nigeria on the topic “Nigeria, A Country At War Against Itself: The Problems, The Solutions And The Way Forward”.

She said the friendly topic clearly mapped out the structural expectations for the informed student who responded by articulating their understanding of the Nigerian situation in ways that revealed their deep immersion in socio-political issues.

“As usual, the writers of the ten best essays were invited to the second round of the competition to write on the topic, “2023 Election: A New Nigeria or a Descent Into Chaos”.

Prof. Ezeigbo said that Ayeni, Oluwanifemi Bright of the State Senior High School, GRA Ikeja Lagos came top as the winner of the competition for the year by scoring 65%. He scored 58% and placed 6th in the first round of the competition.

“Two surprising outcomes are evident in this year’s result. The first is the back-to-back scores of the winners, which show the keen nature of the competition and the originality of the efforts put into it.

“The winners showed an impressive understanding of the two topics and were addressed as exceptional students in their class and category should. Their orderly presentation of ideas and remarkable control of the English language marked them as meticulous people with huge potential. We congratulate the other finalists and wish them the very best in their future endeavours,” Prof. Ezeigbo stated.

She commended the organisers for discouraging handwritten entries as submitting word-processed essays enabled the committee to scrutinise for plagiarism. When students steal their entries from the internet and do not win the competition, their respect for intellectual property rights would grow.

The competition, she added, is thus helping to insert students into the digital world that is now inevitable in all communications. To continue the improvements in quality and originality, the committee suggested that in the future, the implications of plagiarism and receiving undue help should be communicated to the participating schools in the call for essays.

Bishop Okonkwo said the annual event which coincides with his birthday is his way of contributing to education, explaining that “God has blessed Nigeria with so much.

“I don’t think there’s any country in the world that is endowed as this nation. There is none. The only thing is that they were able to manage what they have,” Okonkwo said.

BREAKING: PDP Commences Sale Of Form For Chairmanship, Other Positions On...