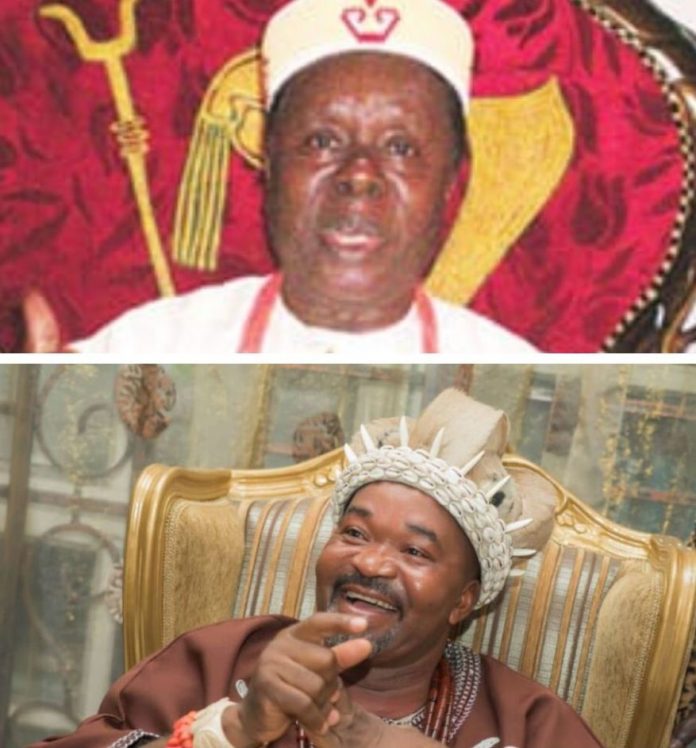 No fewer than five persons were feared injured when pandemonium broke out at the Palace of rival traditional ruler of Awka, Ozo Austin Ndigwe who attempted to celebrate this year’s new yam on Saturday.

Officers and men of the Nigerian Police and Army stormed the venue and chased guests away and sealed off the place.

The security forces also kept surveillance of the environment by driving round the surrounding.

As early as 7.30 am the Umukwa road in Awka town was blocked by security operatives stopping vehicular movement in the area.

Independent learnt that before the arrival of reporters some guests were teargassed  when they refused to leave the venue for the New Yam Festival and this caused stampede at the entrance of the palace.

An elder in the village told reporters: “They woke me up this morning telling me that police wants to seal off the palace and I told them that there are sometraditional rulers from the South East and beyond that are already inside the palace and the one that is more disturbing is that the security operatives were firing live bullets at the people mostly youths who came to find out what is happening”

He further explained that he made contacts at the Police Command and that the order came from the government House Awka and it was also confirmed at the zonal command.

A policeman at the scene who spoke said he that he is carrying out an order from his superiors adding that he is not in the position to provide details.

It is alleged that the order to stop the festival was from Government House.

But Commissioner for Local government and Chieftaincy matters Mr Tony Collins Nwabunwanne said that he did not issue any release or directive to that effect adding that the security operatives are carrying out their duties of maintaining law and order.

Police Public Relations Officer DSP Tochukwu Ikenga also said that he is not aware of the presence of security operatives at the palace of Ozo Austin Ndigwe but promised to make a statement as soon as possible.

It will be recalled that a faction of prominent Awka people crowned Ozo Ndigwe their ruler even though the traditional ruler Obi Gibson Nwosu is still alive.

Since then, Ozo Ndigwe has  been holding himself out as traditional ruler as Eze Uzu III.

However Igwe Gibson Nwosu the Eze Uzu the 2nd is still seated on his throne and is duly recognized by the Anambra state government since the military era till date.

When contacted Igwe Gibson Nwosu said that he is not aware of the presence of security operatives at the factional Eze Uzu palace adding that there is nothing like Eze Uzu the 3rd .

Nwosu had since last year petitioned the state Police Command over the claim by Ndigwe that he is the Monarch of Awka town and the then Police Commissioner explained to him  that traditional Chieftaincy tussle is not part of his duties.

US, UAE-bound Drugs Impounded At Lagos Airport, 39 Arrested In Abuja...