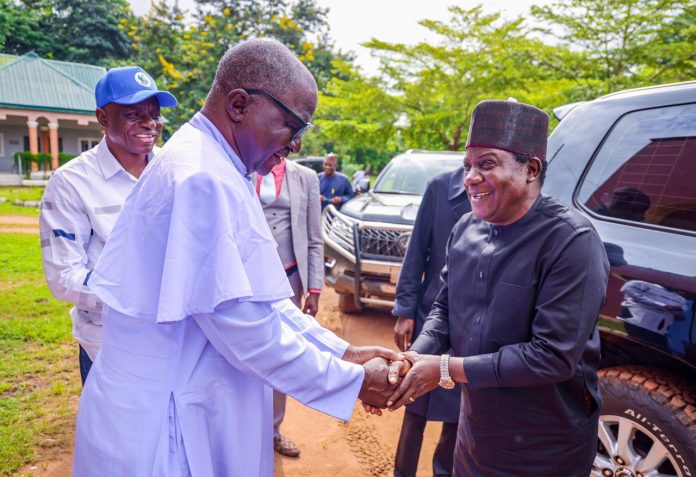 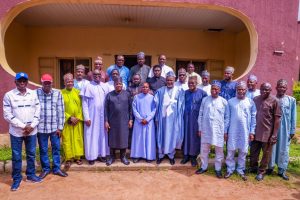 Governor Simon Bako Lalong of Plateau State and Director General of the All Progressives Congress (APC) Presidential Campaign has visited the Catholic Diocese of Shendam to seek spiritual blessings over his political endeavour.

Lalong who was at the Bishop’s Court Shendam together with Deputy Speaker House of Representatives Idris Wreceivedrecieved on behalf of the Bishop by Rev. Fr. Raymond Gofut, Vicar General, Catholic Diocese of Shendam.

Governor Lalong while thanking the Church for praying for him throughout his political journey, said he was in the Diocese to appreciate the Bishop, Priests and the entire Catholic family for always upholding and encouraging him since his emergence as Senatorial Candidate as well as his appointment as Director General of the APC Presidential Campaign Council.

He said his mission home was to thank the people of the zone and sensitize them on the forthcoming elections while seeking their collaboration and cooperation.

He thanked the Church for their guidance and counsel which he said has engendered peace and harmony among the citizens, particularly during recent attempts by some mischief makers and hoodlums to instigate religious and ethnic crises.

Vicar General of Shendam Diocese Rev. Fr. Gofut while welcoming the Governor to the Diocese on behalf of the Bishop said the Church appreciates the efforts of the Governor in carrying the people along and always coming back to seek the blessings of God and the Church in his endeavours.

He led other Priests to pray for Governor Làlong over his recent appointment as the Director General of the APC Presidential Campaign Council, asking God to grant him wisdom, favour and protection as he carries out the national assignment.

Deputy Speaker House of Representatives Idris Wase also thanked the Church for support and prayers as well as for providing honest and unbiased advice to the political class. He said they will do their best to ensure that the people benefit from the democratic process.

Governor Lalong during the visit also held consultations with the Plateau South Stakeholders Forum where he challenged them to remain resolute in protecting the interests of the APC which has according to solid followership in the Zone, State, and nation at large.

He used the event to reiterate the need to highlight the various achievements of the APC in the Southern Zone, Plateau and Nigeria, assuring that at the right time when the campaigns start, Nigerians will be reminded about the passion with which the party has served the people.

Chairman of the Forum and Director General of the ITF Sir Joseph Ari thanked the Governor and Deputy Speaker for taking out time to engage with stakeholders and also respond to comments, suggestions and concerns of the loyal party members.

He said the Forum has been mobilising Ans strategizing towards consolidating on the previous electoral victories of the party. The engagement he said is coming very timely as they hope to also lrage the appointment of Governor Lalong as the DG Tinubu/Shettima Campaign Team to demonstrate that the APC has a strong footing in not only the Southern Zonebut Plateau State as a whole.

The Governor also held another meeting with party leaders and stakeholders from all the six local governments of the Southern Zone where he reminded them of the need to build synergy, mobilise, and strategies, ready to deliver their party and all its candidates once INEC lifts the ban on political campaigns.

Deputy Speaker House of Representatives Rt. Hon. Idris Wase also told the stakeholders that apart from the projects and appointments that the Governor has attracted to Plateau, his elevation as the Director General of the APC Presidential Campaign Council is a sign that there are more blessings to come to the State especially when Asiwaju becomes President of Nigeria.

Zonal Chairman of the APC in the Southern Zone Alhaji Yalum again reminded the party stakeholders of their earlier resolve to not only deliver candidates of the party from top t bottom but also ensure that Plateau State delivers the highest number of votes at the Presidential elections.

Representatives of women, youth and elders also made submissions at the consultations.
.

TETFund: Senate Seeks Increase In Companies Tax Remittance To 3% To...