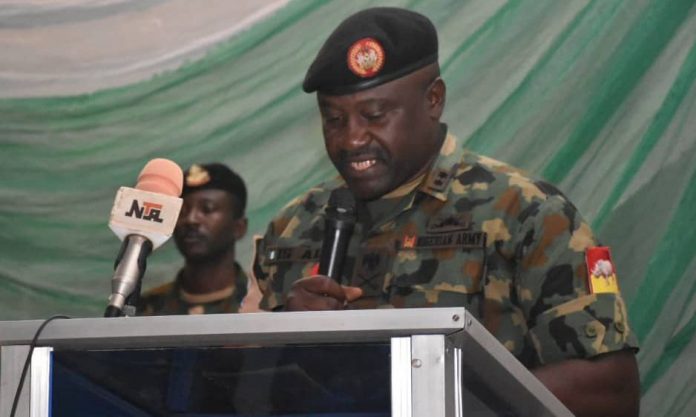 While delivering his keynote address, the Commander noted that the active participation of citizens in the security of their communities is necessary to ending criminalities and senseless clashes on the Plateau.

He noted that the achievements recently recorded in curtailing attacks and farmer/herder clashes must be consolidated and warned that any attempt by crisis merchants to reverse the gains of these achievements will not be tolerated.

Amazed by the large turnout of participants, General Ali noted that there is time for everything in life and the time for peace on the plateau has come.

While commending Justice Daniel Longji (Rtd) led a 26-man Committee formed by OPSH to implement the recommendations of the 36-man Committee on Peace. General Ali said the seminar was organized to enlighten the citizens on sensitive security issues towards agreeing on the way forward. He noted the significance of the event in upscaling the efforts of OPSH in ensuring remarkable peace and unity on the Plateau.

Earlier, the Chairman 26-man peace implementation committee, Justice Daniel Longji (Rtd), in his opening remarks stated peace is a catalyst for progress and development. He described the sensitization seminar as another strategy for achieving a peaceful resolution between communities and religious groups.

While lauding the untiring efforts of Commander Operation SAFE HAVEN in ensuring lasting peace is achieved across the board, Justice Longi (Rtd) revealed that the seminar would help participants build capacity for immediate and future engagements.

Addressing the participants, the representative of Governor Plateau state, Director of Administration, Plateau Peace Building Agency, Mr Gayi Timothy Gayi commended OPSH for its sustained programme on peace and unity of the state.

He urged aggrieved persons to forgive one another and work together on the path of peace.

Highlights of the event were paper presentations on Trust and peaceful core existence by notable resource persons and group photographs.

2023: Okupe To Step Down If PDP Zones Presidency To Southeast

Your Phone Can Be Hacked While Charging Or Through Facebook, NCC...