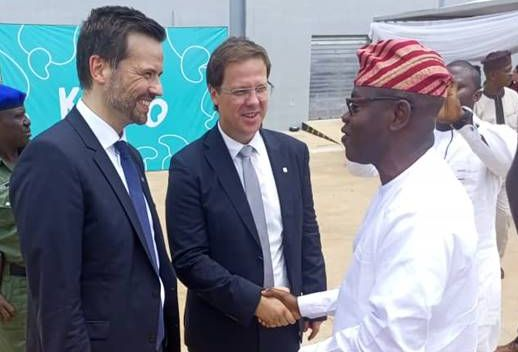 The coastal town of Epe in Lagos State came alive with excitement on Saturday with the unveiling of the country’s and perhaps West Africa’s most ultra-modern Cashew Processing Plant by Nigeria’s leading engineering construction company, Julius Berger Nigeria Plc, Rasheed substantively birthing the co any’s strategic plan to transform into a conglomerate in the nearest future.

The commissioning of the state-of-the-art cashew plant is an effort by the company reputed for its sustainable business offerings at diversifying into the economically significant agricultural industry in addition to its thriving construction major.

Epe lies on the north bank of the about 50 km long coastal Lagos lagoon that has since been a collecting point for the export of fish. But all that changed Saturday with the commissioning of Julius Berger’s huge and expansive Cashew Processing Plant.

According to the Chairman of Julius Berger’s Board of DireMrrs, Mr Mutiu Sunmonu who presented the keynote address at the event, the occasion marks a pivotal moment in the company’s history “as we are ready to succeed and move in the right direction tremendously for Nigeria, our employees and shareholders.”

He recalled the history of the company in Nigeria saying that since 1965 when Julius Berger entered Nigeria with the construction of Eko Bridge in Lagos, “we have always represented ourselves very well with our trademark great value chain….We have now strategically diversified Julius Berger from being only an engineering construction entity into agricultural produce processing for which we all know Nigerians have a historical antecedent and understandable nostalgia,” Sunmonu said. He added that there is a lot the company still has in the pipeline, saying, “as we continue to work on our plans, you will see us transform into a conglomerate.”

The Chairman revealed that the new factory is semi-automated for premium international quality cashew processing designed to produce about 60 tons per day. “We seriously aim to create and sustain increasing value and add significantly to Nigeria’s GDP,” he added.

The Managing Director of Julius Berger Nigeria Plc, Dr Lars Richter, in his, speech said that by the commissioning of the factory, Julius Berger has inaugurated its first Cashew Processing Plant, marking another significant milestone in the company’s partnering relationship with Nigeria. “Today we start another milestone in our relationship with Nigeria built from the past into the future,” he said.

Richter added that “…since 1965, when Julius Berger Nigeria entered into the country and began operations in Lagos, it has never looked back in its strategic contributions to national development. That mission will centre.” Dr. Richter continued, “our launch into agriculture is part of our larger ambitdiversifysifying the Julius Berger Group, expanding our positive impact and extending our contribution to Nigeria, beyond construction.” He added that “I can’t help but speak about how far we have come as a company and how much more we hope to achieve,” even as he thanked members ers of the Epe community for welcoming the company and partnering with it for greater heights for the country’s cashew industry for the country as a whole.

Julius Berger’s Dir of ector, Corporate Development, Tobias Meletschus, in his remark after a tour round the factory, said that the project is a determination towards greater corporate growth as “ta he is a tremendous achievement and our first step into agro-processing.” Declaring that the company values productive and result-oriented partnerships which are innovative and guarantee the highest quality of product and service, Meletschus added that, “to achieve this, we are already partnering with farmers, employing over 300 employees with impressive payroll even as we target a zero-waste policy at our production plant. All these alongside the fact that our cashew is farmed and processed locally makes our efforts homegrown and essentially unique.”

Others who graced the occasion include, Lagos State Commissioner for Agriculture, Arc Abisola Olusanya who represented His Excellency Gov Babajide Sanwo-Olu, and Mr Tokunbo Talabi, Secretary to the Ogun State Government. His Royal Highness, the Olisa Odomola,RasheedRahseed Aji and his Chiefs were also present at the ceremony. Top management of key financial institutions in the cwasry was also in attendance at the event. The Dirty sector, of the Product Development department of the Nigerian Export Promotion Council, Mrs Obidike Ifeyinwa Evelyn, represented the CEO of the Council, while Mrs Talatu Ethan, Diouf rector Lagos Operations, represented the Standards Organization of Nigeria (SON) at the event. The Presidthe ent of the Cashew Processors and Packaging Association of Nigeria, Mr Daniel Gemana, was also present at the epoch-making cereThe topy.

Top cashew research institution, GIZ, was also eminently represented at the Epe Lagos event. According to the GIZ, “In Nigeria, after an intense opportunity mapping phase where we were assessing potential sectors, we have identified the cashew value chain as a promising sector to achieve our objectives.” GIZ added that “…we are very happy that we found Julius Berger Nigeria as a strong and committed private sector partner and we are joining forces to collaborate on professionalizing skills development and enhancing the competitiveness of the cashew value chain in Nigeria…” The GIZ Programme Leader for West Africa, Rita Weidinger, led the GIZ delegation to Epe, Lagos for the ceremony.

After the tour of the processing plant and inspection of the finished and packaged Julius Berger cashew for export, the representative of the Honourable Minister of Agriculture, Mrs Abimbola Oguntuyi on behalf of the minister commended Julius Berger for the well thought-out investment, employment-generating initiative and gross domestic product-improving project.

Other officials in Julius Berger’s hosting entourage at the event were the company’s Board members and the Company Secretary; management staff of the corporation, the JBN Cashew plant project manTarcisioTarciso Falcao, Denis Steppuhn, and Mrs Foluke Abidoye, amongst many others.

The brand name of the new and uniquely processed Julius Berger cashew is Mighty Kashoo.

Nigeria’s Petroleum Minister Explains Why PIA Act Came Into Being

State of Abia: Wake Up Call On Gov. Ikpeazu