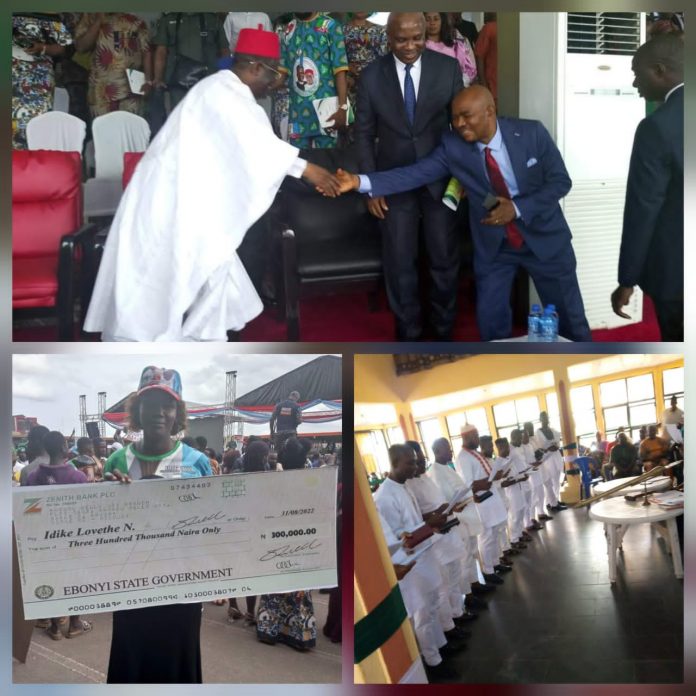 Chieftain of the All Progressives Congress, Member of APC Legacy Projects Media Team and erstwhile National Publicity Secretary of the defunct New People’s Democratic Party (nPDP), Chief Eze Chukwuemeka Eze, has expressed delight over the continuous economic empowerment of farmers, artisans, small businesses holders, men and women alike in Ebonyi State by the Governor, Engr. Dave Nwaze Umahi, whose economic blueprint has placed the State on the map of the fastest developing States in Nigeria with a catalogue of multi-sectoral projects doting the nooks and crannies of the state as model for good governance.

Chief Eze Chukwuemeka Eze who was in Abakalki the capital of Ebonyi State to congratulate Mr. Chooks Oko, his schoolmate whom he last saw during their graduation from the University of Calabar about thirty three years ago, on his appointment as a Media Strategy Aide to the visionary and workaholic Governor of Ebonyi State, Dr. David Nweze Umahi, the Chairman of South East Governors Forum and influential APC Leader, says the Governor has earned himself a place in the heart of men and posterity will be kind to him and his likes.

In a statement made available to media houses, Eze recalled that he left Ebonyi State some months ago after the departure of President Muhammadu Buhari who was in the state to inaugurate some of the classic projects of Gov. Umahi some of which include – the best Medical University in Africa- the King David University of Medical Sciences, Nigeria Best Ecumenical Centre, Saint Margaret Umahi International Market, Nigeria most outstanding Government House, some flyovers, parts of the Ebonyi International Airport, among others.

Having published some treatise on these great projects, Eze said he owe it as a duty to expose another bewildering aspect of this enigma that governs Ebonyi State, Gov. Umahi – that is, his deep sense of Philanthropy and love for humanity and how he is touching and changing the lives of thousands of Ebonyians.

He postulated that after visiting his good friend, the Orator and Commissioner for information of Ebonyi State, Barr Uchenna Orji, he took time off to visit the new Media Aide to Governor Umahi and after exchanging pleasantries, he told the new Media Aide his experience in one of the Banks in the State where he was made to spend hours before gaining entrance into the Banking Hall because of the unprecedented crowd he met within the bank premises. Eze said he had a shocker when the Governor’s aide revealed that the trend had been on for some days.

“Eze, the crowd you are talking about have subsided because if you were here about three days ago, you may have spent days not hours to gain entrance to the Bank as Governor Umahi has resolved to touch the lives of thousands of Ebonyians through his latest Empowerment scheme”

Eze said available report has it that the old Ebonyi State Government House has been a beehive of activities as people troop from villages, cities, and Abakaliki to receive monies released as empowerment funds for the people in the state.

The Water Works Road branch of Zenith Bank on Tuesday was confronted by a crowd of people who came to receive their own empowerment funds of three hundred thousand (N300,000) naira per beneficiary.

The development caused a traffic logjam on the ever-busy road which leads to the popular and busy Ishieke Motor park, CASS Campus of Ebonyi State University.

Movement through Ogoja Road, the longest and most busy road was also challenging as other beneficiaries of another tranche of the empowerment programme thronged the Old Government House located at the Ogoja Road.

The crowd of people sighted at the Ogoja Road axis were, mostly women and traders including those who said that they came from some far-to-reach communities across the 13 local government areas of the State.

Throwing more light on this unprecedented Philanthropic activities by Governor Umahi, the State Commissioner for Information and State Orientation, Chief Uchenna Orji explained that the State government released one point eighty billion (1.8 billion)Naira for the empowerment of a set of people in the state. The fund was approved by the State Executive Council meeting.

Eze noted that another tranche of nine hundred million Naira of released funds was for the NG-CARES Empowerment programme for farmers, SMEs, Market men and women, youths and Public Work volunteers as beneficiaries.

Eze highlighted that the money was being disbursed through CSDA, FADAMA, and MSMEs under the Ministries of Human Capital Development, Agriculture and Natural Resource as well as Commerce and Industry and that the balance of Nine hundred million Naira is for about three thousand women and youths as ENDSARS empowerment package in the state.

Eze further said he was meant to understand that the State Governor, Engineer David Umahi on the occasion of the flag-off of the empowerment said that September 2022 would be empowerment galore and that more of human empowerment packages were to be rolled out within the month.

The disbursement committee is led by the Deputy Governor, Dr Eric Igwe, a gentle man to the core.

After this exposure, Eze said he investigated further into Gov. Umahi and his Philanthropy and result of his investigation is succinctly summarized below:-

“His Excellency, Engr. Chief David Umahi is very philanthropic, with numerous chieftancy titles, including Ekubara oha. As a cheerful giver, he has given meaning and value to the lives of many people of different ethnic nationalities. Under the “ENGR. DAVE UMAHI EDUCATION FOUNDATION”, Chief Umahi has given full scholarship to over 750 undergraduates from the inception of their tertiary education to final year, from 2009 to date. He also runs a Charity through which he distributes essential materials and cash to widows, orphans and the less–privileged periodically.

Through his Youth Empowerment Scheme, he has sponsored the training of young people in entrepreneurial skills, mobilized many financially and today, many of them are proud owners of thriving businesses.

Eze further highlighted that apart from the above feats, Umahi stands out amongst his colleagues as having once appointed over100 Executive Council members, over 1100 TAs and over 2000 Ebonyians who occupy political positions in the state of which 90 percent of those who occupy this political position were youths and over 30 percent of them women..

I can now understand why the great mind Martin Luther King Jr. with Umahi in his mind stated, “Life’s persistent and most urgent question is “What are you doing for others?”” while on the other hand, Conrad Hilton exposed Governor Umahi with this quote, “Charity is a supreme virtue, and the great channel through which the mercy of God is passed on to mankind. It is the virtue that unites men and inspires their noblest efforts.”

If what Umahi is doing is not revolution, I need to be educated on what revolution is all about.

After his experience during in course of the visit, revealed that he was forced to send the text below to Governor Umahi.

“H. E. Dr. D. N. Umahi my brother and leader!! I was at the Zenith Bank today and there was no space to enter the Bank and I inquired from the Security guys on duty, what is the meaning of this crowd? He asked me if I am new in Ebonyi State, I told him no and he replied that this multidue of people are those that Gov. Umahi has approved their empowerment!!

Eze  commended the Governor for appointing his good friend, school mate and a veteran Journalist, Oko as Media Strategy Aide. He said he is very convinced that the new appointee will bring his wealth of experience to bear on his new task of promoting and propagating the ideals and vision of the APC government in Ebonyi State.

Eze stated that Mr. Oko was hitherto the governor’s SA on strategy. He holds a Bachelor of Arts degree in Literary Studies from the University of Calabar in 1989. He was a former Special Projects Editor, the Vanguard Newspapers and Business Manager, Diet Newspapers, presently, Daily Independent newspapers and a former Managing Editor of the National Pathfinder Newspapers and a member of the Nigerian Guild of Editors.

He is also member of the Nigerian Institute of Public Relations.

Eze commended the Governor and stated, “for Igniting this level of celebration in Ebonyi State.

I Cheated On My Boyfriend Because He Was Uncircumcised – BBNaija’s...