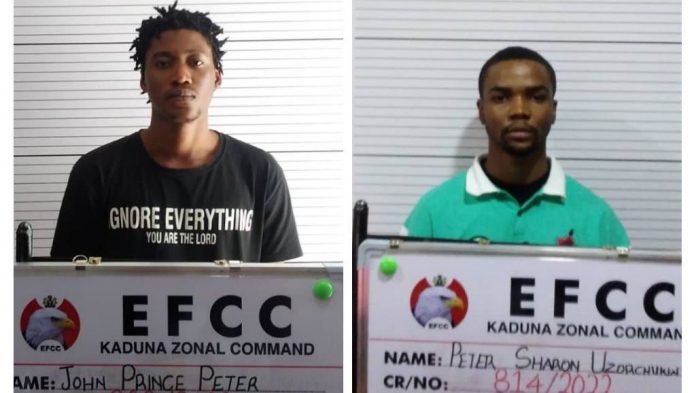 The fraudsters, Peter Uzorchukwu Sharon( a.k.a Drew Mason) and Peter Prince John, according to Wilson Uwujaren the EFCC Spokesperson in a statement to Newsmen were jailed on Monday, after pleading guilty to one- count separate charge, bordering on internet fraud and cheating by impersonation upon their arraignment by the Kaduna Zonal Command of the Economic and Financial Crimes Commission, EFCC.

The one count charge reads: “That you, Peter Uzorchukwu Sharon (a.ka.a Drew Mason) (m), between January and August, 2022, at Kaduna within the jurisdiction of this Honourable Court, cheated one Riphylla Diengdoh (an Indian) of the total sum of 56,000.00 only when you pretended to be Drew Mason; a white man from United Kingdom and an Account Manager for Cindix.io firm on several online social media applications, which you knew to be false and you thereby committed an offence contrary to Section 308 of the Kaduna State Penal Code Law of 2017 and punishable under Section 309 of the same law.

The defendants pleaded guilty to their respective charges when it was read to each one of them separately.

Upon their “guilty” plea, prosecution counsels: M.E. Eimonye and Matiyak .Y. John prayed the court to convict them accordingly.

Justice Sadiq thereafter convicted and sentenced Uzorchukwu to five (5)years imprisonment, with an option of fine of N150,000.00 (One Hundred and Fifty Thousand Naira).

He forfeited an Apple Iphone 13 Pro, used to commit the offence to the Federal Government of Nigeria. The sum of N300,000.00 returned by the defendant as restitution was also forfeited to the government.

The judge equally convicted and sentenced John to six (6)months imprisonment, with an option of fine of One Hundred and Fifty Thousand Naira (150,000.00). He also forfeited iPhones to the government.

The convicts’ journey to the Correctional Centre began when they were arrested by operatives of the Kaduna Zonal Command of the EFCC for internet-related fences. They were particularly found to be impersonating foreigners, and in the process, defrauded many local and foreign victims. They were charged to court and convicted.