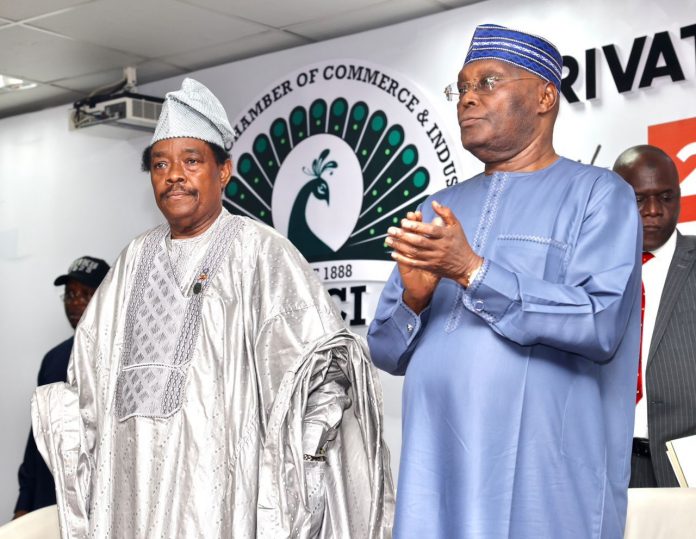 Former Vice President, and the presidential candidate of the People’s Democratic Party (PDP), Atiku Abubakar promised to lead Nigeria out of poverty by stimulating growth that will create jobs and wage war against hunger if elected into power.

A statement signed by AbdulRasheed Shehu, the Special Assistant to Atiku Abubakar, Broadcast Media that was made available to Daily INDEPENDENT said the former vice President pledged at the private sector economic forum on the 2023 presidential election, which was hosted in Commerce House, Victoria Island Lagos today, by the Lagos Chamber of Commerce and industry.

In his presentation titled “Nigeria dresses in borrowed robes”, the PDP presidential candidate Atiku Abubakar used the opportunity to acknowledge the President and members of the Chamber for initiating such an intellectual gathering where germane issues affecting the growth of the country are discussed.

He stated how comfortable he was amid captains of industry, entrepreneurs and businessmen and women which as a private sector person, it was like a homecoming to him which he simply defined as a meeting of like minds.

Atiku stated that in times of uncertainties, it is the hallmark of leadership for business and political actors to pause and anticipate before taking the next steps.

He maintained that our actions today will have consequences on our tomorrow and the day after.

The former vice president charged the audience to take stock of the assets of the present-day government (if there are any) and liabilities (which will be huge!!) and take a position as the 2023 polls draw near. In his words, “it is also your responsibility to interrogate those who aspire to govern the country by assessing their understanding of the environment, their policy priorities and their strategies for dealing with a plethora of local and national issues from the mundane to the most complex”.

Atiku warned Nigerians not to allow political slogans to take the place of development plans; hence political propaganda on Facebook, tweeter and Instagram is never a substitute for proper socio-economic and political agenda. He maintained that the private sector remains the key to any government’s development agenda and any administration that wants to succeed must always listen to them.

He emphasized that private sector leadership in driving growth is the first of the three key principles of his economic growth and development agenda for Nigeria.

The former vice President made an elaborate presentation with statistics on why the Nigerian economy is crawling rather than growing and emphasized that under the present administration, our people are not working. He enumerated clearly that more Nigerians are poorer and more miserable today than in 2015, with a high capital flight which he summarized by saying that Nigeria is being dressed in borrowed robes.

Atiku stated that these economic challenges have persisted because the APC-led government indulges in a policy of blaming the opposition and external factors for Nigeria’s economic woes; hence an unprepared leadership fails to anticipate impending crisis and is always slow to react.

He stated that the evidence however is overwhelming that the country’s under-performance is largely attributable to leadership failures in the management of the state.

Having identified the key indices inhibiting the economic and socio-political growth of the nation, Atiku mentioned the importance of a warm handshake with the private sector as a strong productive and pro-growth private sector is needed to create wealth, generate employment opportunities and help to fight poverty.

He promised to do things differently if he is elected the resident of Nigeria, by supporting the private sector to drive growth. Atiku promised to establish strong partnerships in investing in infrastructure, creating jobs and improving income in the fight against poverty.

He promised to restore investor confidence in the Nigerian economy with a better coordinated fiscal monetary policy that will control inflation, and stabilize the exchange rate and interest rates that will be supportive of the business quest for credit.

Atiku mentioned that he has a good grasp of the challenges bedevilling Nigeria and knows the root causes of the problems confronting the country which he classified majorly as self-inflicted and promised to reverse the trend with determination.

Atiku assured the audience that he is not a novice in economic reforms and economic management matters. In his words, “I have a history of economic reform and economic transformation. With me at the helm of affairs of this country, the good old days of prosperity will return” and warned Nigerians never to hand over their future to a greenhorn.

In an address presented by the President of the Chamber, Dr Michael Olawale Cole, he warmly welcomed the participants and enumerated the status of LCCI which was established in 1888 as the foremost Chamber of Commerce and Industry in West Africa, representing over 70% of private sector organizations in Nigeria.

In his words, the President stated that “while the Chamber is non-partisan, we are however interested in the economic agenda of the candidates and their plans to make a better Nigeria in the next dispensation”. He promised that members of LCCI wish to contribute to setting a new economic order that can take the Nigerian economy from the doldrums and reemphasized that the gathering was necessary to fashion out new policy directions, institutional reforms and sound governance as critical elements toward creating a new economic order in Nigeria.

The president maintained that the Chamber has organized similar sessions in every election circle within the past 16 years as its public policy advocacy to provide a first-hand opportunity for the leading political parties to speak to the organized private sector on their economic blueprint for Nigeria. Dr Cole was vocal in highlighting the myriads of challenges confronting the nation which include oil theft, unsustainable subsidy regime, insecurity and the current foreign exchange crisis and mentioned the need for the incoming government to pay special attention to education, as that will determine the future of the Nigerian youths.

US Donates Over 3.5m Doses Of COVID-19 Vaccine To Nigeria