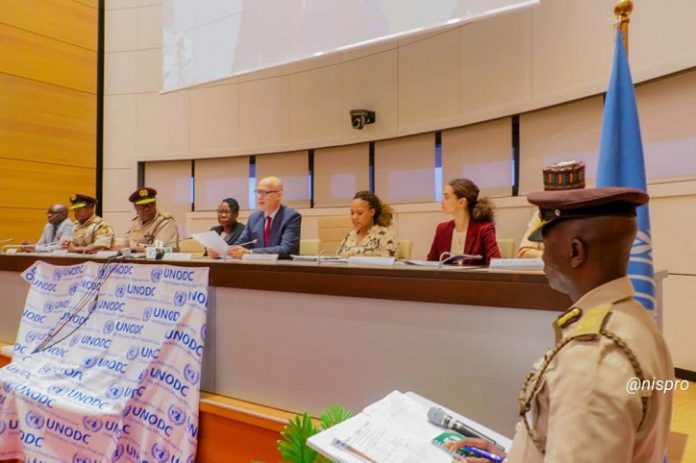 The Nigeria Immigration Service (NIS) in collaboration with the United Nations Office on Drugs and Crime (UNODC) has unveiled the Observatory Report on Smuggling of Migrants (SOM), which sought to unravel the dynamics of smuggling of migrants through and to Nigeria between 2019-2021.

Speaking at the unveiling at the NIS Headquarters in Abuja, the Comptroller General Immigration, Isah Idris, who was represented by the Deputy Comptroller General in charge of Visa and Residency, DCG Ishaka Haliru assured of the Service’s commitment to contain the menace of migrants smugglers, stressing that the Service having fully domesticated the protocol against the smuggling of migrants by land, sea and air in the   Immigration Act 2015 (Sections 65-98) is statutorily empowered with the necessary legal instrument to prosecute smugglers of migrants.

The Comptroller General while thanking the Canadian government and other development partners for their impactful interventions in the fight against the smuggling of migrants and other cross-border criminal activities reiterated the continuous commitment of the Service to collaborate with critical stakeholders in any efforts at achieving orderly, humane, and responsive migration.

He noted that the Service will look at the report closes with a view to enabling processes and procedures to frontally address the issues raised.

Earlier in his remarks, the Country Representative of UNODC, Dr. Oliver Stolpe described the report as insightful and quite useful in understanding and addressing the unfolding migratory realities in Nigeria and in the West African sub-region.

He noted that an interesting element of the report was the steadily decreasing cases of smuggling of migrants in Nigeria since 2018 and called for the sustenance of the tempo against it with a view to wiping the menace out of the country’s migratory discourse.

The representative of the Canadian High Commissioner to Nigeria, Ms Majorie Lubin appreciated the depth of the report and pledged her government’s continuous partnerships and collaborations with the Service and other relevant stakeholders in better migration management.

The presentation of the Observatory Report demonstrates another giant move by the Service, UNODC, and indeed other partners to offer reliable inferences on the unfolding migratory realities in the country.

An instructive finding of the Research is that 75% of Nigerians on the move surveyed during the work stated that they had planned to use migrant smugglers or travel facilitators when they were preparing for their journey as compared to 21% who said they had not planned to do so.

The Report further indicated that 72% of those surveyed stated that someone or something influenced their decision to migrate, while just 9% of that group cited smugglers as the most important influence. On gender profiling of migrant smugglers, the report stated that 78% are men, 19% are women, and 3% are both. The Observatory Report was done by some researchers under the auspices of UNODC.

Meanwhile, as part of efforts to increase public awareness of the ills of migrant smuggling, the 2022 Nationwide Sensitization Programme on Smuggling of Migrants was flagged-off during the event.

Other major highlights of the event include the unveiling of the Observatory Report Document and goodwill messages from representatives of relevant stakeholders such as the Ministry of Interior, FIIAPP-ATIPSOM, ICMPD, and NAPTIP among others.

The event was attended by representatives of the Embassies of Denmark, Spain, Italy, Netherlands, and the Inspector General of Police, (represented by CP Babatola Afolabi), NACTAL, and the Refugees Commission represented by Mr. Titus Murdakai.

UN Says 1.74 Million Children In North East At Risk Of...

Nigeria May Not Achieve 2030 Target Of Ending Tuberculosis