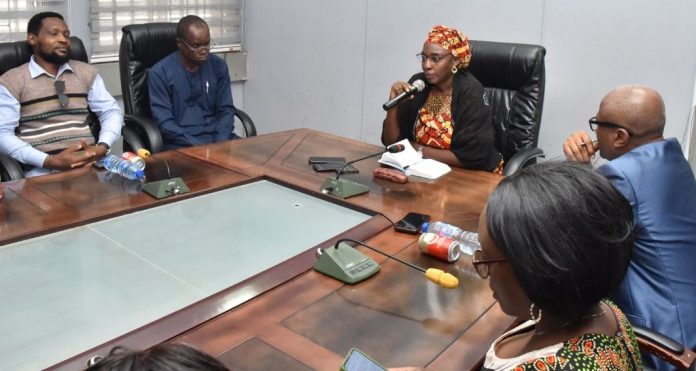 The decision of the Federal Government to exit 100 million Nigerians out of poverty line would be more feasible, if stakeholders recognise their roles and play it effectively.

Permanent Secretary, Federal Ministry of Labour and Employment, Daju Kachollum said the role of key players in the private sector, including development partners remain indispensable, even as she stressed that government is not resting on its oars in creating an enabling environment to make this dream achieveable.

Daju Kachollum who recently assumed duty as Permanent Secretary in the Ministry, told Labour correspondents during an interactive session at the weekend, that one of the measures government is adopting to the presidential directive is aggregating the impact various MDAs can bring to the table to actualise the mandate of exiting the 100million people out of the circle of poverty.

Recall that President Muhammadu Buhari had vowed that his administration will lift at least 100million Nigerians out of poverty by year 2030.

To this end, the Ministry of Labour and Employment said it has launched a data bank, under the auspices of Labour Market Information System to guage those who have been employed and those wishing to secure employment.

“With the new National Development Plan 2021 to 2025 I am sure you are aware that there are many thematic areas. It is not just Federal Ministry of Labour and Employment or the Federal Government as it were, it is multi sectoral. And different sectors will come together to ensure that this is achieved.

“The private sector is supposed to play a huge role because we cannot all be dependent on government. The private sector has its own role to play, that’s why the federal government has shown that for the development plan, a certain percentage of what it takes to ensure that employment, infrastructure and all that is carried out by the private sector.

“So we will work together and for Ministry of Labour, we have different agencies and departments that have to do with employment skills, as you all know, and recently this week, the Labour Market Information System, which we’re bringing out for the citizens to know is to ensure that data is collected.

“The intention is to actually improve on job matching, the Nigerian Electronic Labour Exchange which has been on, but now we are going to improve on where you match jobseekers with the job. It has been going on but apparently many Nigerians are not aware of it, so the ministry is upgrading that and constructing more job centers across the country,” Kachollum explained to reporters.

She also maintained that the Ministry of Labour has about 16 Labour centres across the country, while the goal is to upscale to the 36 states and Abuja.

“We plan to have job centres not only in the cities but in the 744 Local Government Areas and we have started that in the 2022 budget. We want more job centres created in the LGAs and at state levels because that is how the government wants to help,”she noted.

The Permanent Secretary also noted that the National Directorate of Employment (NDE) has been adopting measures to harmonise players in the informal sector, so that they can benefit from the National Health Insurance Policy.

Her words, “Yes, I would say that government policy to reduce poverty by 2030 is real, and the goal of cutting down youth unemployment is real as well.

“We believe it will equally help the artisans who have not been able to take care of themselves or their families when they are ill to go to the hospitals and have good medical care.

“That is where NSITF also comes in, its a critical arm of the Ministry of Labour, Employment Compensation Act, where anybody who has an accident at the place of work is compensated and paid a certain amount, depending on how much they have been doing or how much you earn and they have been doing that.

“They have actually taken the bill before the National Assembly, where it will be improved upon and better things will come to the citizens and we are hoping and praying that the National Assembly will be able to pass the bill in time as it will make it easier for employees who are supposed to pay 1% to the fund.

Buhari’s Grievances Over NASS Adjustment of Budget Not Out Of Place,...