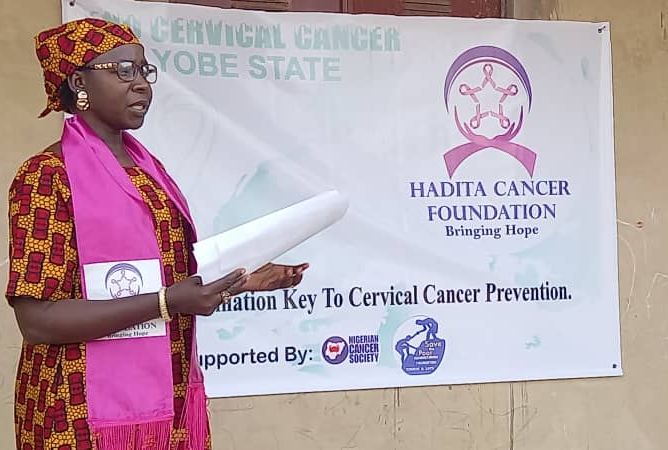 A non-governmental organisation, Hadita Cancer Care Foundation has concluded plans for the introduction of a Cancer Trust Fund in Yobe and Borno states by October 2022.

Hadiza Aliyu Mangga, CEO/Founder of the HHadithCancer Care Foundation revealed this during an interview with Daily Independent in Damaturu.

According to her “when I was first diagnosed with breast cancer, scaring wasn’t at the forefront of my life, mind and heart but what conquer the fear is that I know I am a survivor, I had no choice but to navigate a life that requires a living.”

Speaking on the objectives of her foundation, Mangga explained that it was aimed at “Promoting and developing awareness in the public and emphasize the importance of early detection, all of which play a major role in the treatment of cancer”.

“Creating cancer awareness and removing the stigma and fear attached. Raising funds for poor cancer patients. Educating people about the key risk factors, since more than 30% of cancer cases could be prevented by modifying lifestyle or avoiding the risk factors. Developing collaborations and partnerships among different national, regional and international organizations and NGOs. Informing people about the importance and regular screening and check-ups. Helping spur a change in the perspective of people toward cancer. Helping peoples recognize the 10 HALLMARKS of cancer, thus enabling them to seek treatment at an early stage”.

She further said that in Yobe and Borno states they have so far supported 13 victims of cancer from surgery to recovery. Appealed to the government and well-meaning individuals to partner with the foundation in reducing the mortality rate of the victims in these two states.

Why I Want More Youths In Government, Says Edevbie

NSCDC Launches Telescopic Monitoring Of Officers, Men Of The Agency