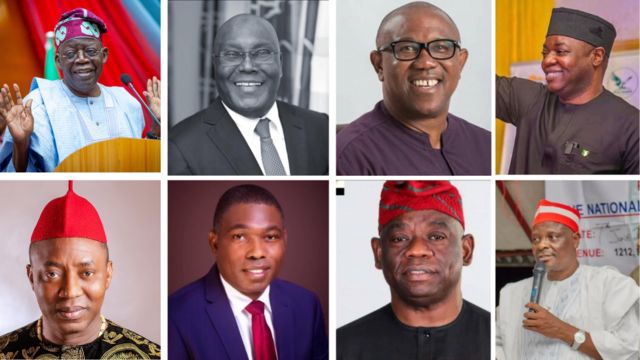 The battle line is finally drawn for the presidential, vice presidential and national assembly candidates of the 18 registered political parties as the Independent National Electoral Commission (INEC) publish a final list of candidates for national elections.

Expectedly Atiku Abubakar ( PDP) Asiwaju Bola Ahmed Tinubu(APC), Peter Gregory Obi (LP) and Rabiu Kwankwaso( NNPP), arguably the four top contenders for the 2023 presidential election, have scaled INEC’s final hurdle alongside their running mates, and are listed to fly the flag of their different political parties at the polls.

INEC also rubbished the purported expulsion of the candidate of the African Democratic Congress, Kachikwu Dumebi from the party by former chairman of the party Okey Nwosu by listing his name alongside other candidates.

For senatorial candidates, the Independent National Electoral Commission stuck to its earlier position in not publishing the name of serving Senate President, Ahmed Lawan for the Yobe North senatorial district. It also did not publish Alhaji Machina, the alleged winner of the nomination.

The same scenario played out in Abia Central Senatorial district where the commission kept the position vacant, refusing to publish the name of Hon Sam Onuigb, winner of the party’s nomination nor Emeka Atuma, who was imposed on the district by APC leaders.

Explaining the action of the commission earlier in a statement, Barr Festus Okoye, INEC national commissioner and chairman of the Information and Voter Education Committee said
the approval and publication of the final list of candidates for national elections (Presidential, Senatorial and Federal Constituencies) were “under section 32(1) of the Electoral Act 2022 and item 8 of the Timetable and Schedule of Activities for the 2023 General Election”.

According to him, the “list published today contains the names of candidates validly nominated for national elections at the close of party primaries and the period earmarked for withdrawal and substitution of candidates”

He said the final list of candidates for State elections (Governorship and State Constituencies) will be published on 4th October 2022 as already indicated on the Timetable and Schedule of Activities for the 2023 General Election.

“In summary, all the 18 political parties have fielded candidates and their running mates for the Presidential election. For legislative elections, 1,101 candidates are vying for 109 Senatorial seats and 3,122 candidates for Federal Constituencies i.e. House of Representatives seats, making a total of 4,223 candidates contesting for 469 legislative positions.

The commission has however
appealed to all political parties to channel any observations on the list of candidates to the Commission and such must be signed by the National Chairman and Secretary of the political party and supported with an affidavit as provided in section 32(2) of the Electoral Act 2022.