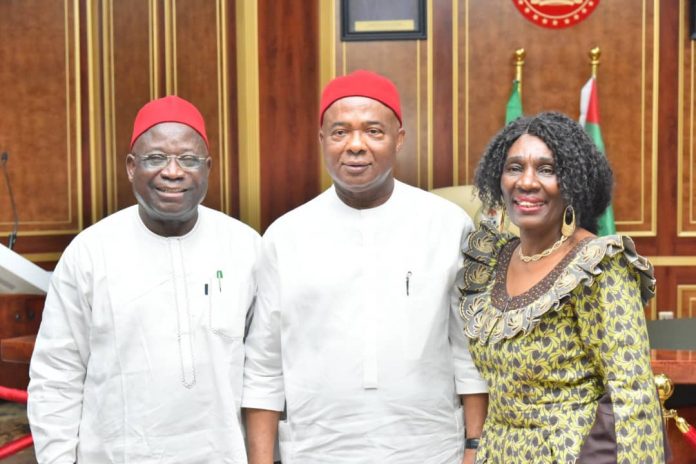 Governor Hope Uzodimma of Imo State has pleaded with the Academic Staff Union of Universities (ASUU) to allow students to go back to school, saying any sacrifice made to achieve that should not be seen to be misplaced.

The Governor made the appeal, Wednesday, when he received in audience members of the Governing Council of the Federal University of Technology Owerri (FUTO), who paid a working visit to him at Government House Owerri.

Governor Uzodimma who appealed specifically to the FUTO branch of ASUU to “allow students studying in the university to go back to school” urged all parties in the ASUU/FG saga to sheathe their swords and allow the sleeping dog to lie.

Led by the Pro-Chancellor and the Chairman of the Governing Council of FUTO, Senator Jack Tilley-Gyado, the Governor said that “education is the key ingredient for national development, so it is the responsibility of leaders in the country to resolve issues and controversies that tend to impede the academic progress of her youths.”

“What the leaders of Nigeria owe our future generation is to ensure that they are allowed to acquire knowledge and be better citizens in future.”

The Governor who acknowledged that education is an expensive project to acquire said that “when the foundation is laid and infrastructure like that of FUTO is put on the ground as a platform, it is the civic responsibility of the leaders to support the institution to maximise their objective.”

He expressed delight in receiving the Governing Council and assured the members that he will support FUTO to thrive like her counterparts elsewhere.

On the controversies surrounding land allocation in FUTO, the Governor noted that he has gone the extra mile to investigate the problems and related matters, noting that he believes the problems can be resolved amicably.

He, therefore, appealed to both the natives and the visitors to the school, the management, staff and students to see the need for the school to operate in a peaceful environment by creating a win-win situation for all interested parties. “This will allow FUTO Community to enjoy the adorable Imo hospitality.”

Governor Uzodimma highlighted the unwarranted traffic that crisscrosses the University premises and expressed the need for it to be stopped.

Reiterating his belief in the synergy between the policies of the State and Federal Governments, the Governor said “there is every need to understand that government is one and that is why State Governments always try to domesticate Federal Government policies to ensure that States can synchronize what the Federal is doing to give the citizens a uniform development.”

He then challenged the FUTO Governing Council to “think out of the box and see the university as a business school that will be able to fund itself and even make a profit so that the reliance on Federal allocation or subsidy will be far reduced.”

Governor Uzodimma described FUTO as one of Imo State, South East and Nigeria’s most cherished Universities and declared his government’s willingness to support the university to succeed.

In his remarks, Senator Tilley-Gyado said they come on the visit as a “mark of respect and protocol to the landlord and to assure him that FUTO will work in synergy with the Government and people of Imo State under the present Governing Council.”

The Chairman noted: “That there is a need to end the land crisis in FUTO, ensure security and remove all distractive atmosphere of uncertainty enveloping the university that has hindered both local and foreign investments in the school.”

He appealed, on behalf of the Council, to the Governor to help them in settling the issue of land once and for all “by giving them a certified Certificate of Occupancy (C of O) of the FUTO lands.”

Sen. Tilley-Gyado thanked the Governor for getting the Federal Government to approve Federal Medical Centre (FMC) Owerri as a part of the Faculty of Medicine and Clinical Training of FUTO.

He expressed their sincere gratitude to the Governor and President Muhammadu Buhari for the gesture.

Sen. Tilley-Gyado took time to laud the Governor on the landmark achievements associated with his government, particularly on road infrastructure, describing the two Federal roads commissioned by Mr President recently as “one of the best in Nigeria today.”

“This is in addition to the foresight of the Governor in developing the balloon technology that has gone a long way in controlling flood in the State capital,” he said and appealed to the Governor to avail him of the opportunity for the technology to be replicated in his State.

Senator Tilley-Gyado who described Governor Uzodimma as a “gift to Imo State and Igbo race” said that “Igbos have a special role to play in Nigeria when they listen and adhere to the advice of people like Hope Uzodimma.”

Thanking the Governor for allowing them to visit, he commended him for his efforts in making Sam Mbakwe Cargo airport a true International Airport with night-landing facilities.

The Deputy Governor, Prof. Placid Njoku, the Secretary to the State Government, Chief Cosmas Iwu, and the Chief of Staff, Barr. Nnamdi Anyaehie and other members of the State expanded Exco joined the Governor to receive his visitors.

The 17- member Governing Council, both external and internal was led by Senator Tilley-Gyado and Prof. (Mrs.) Nnenna Otti the Vice Chancellor of FUTO.

About 79 PHCs Get N418m As Zulum Launches Borno’s Basic Healthcare...

Minister of Transportation Travels Through Abuja – Kaduna Rail Track To...