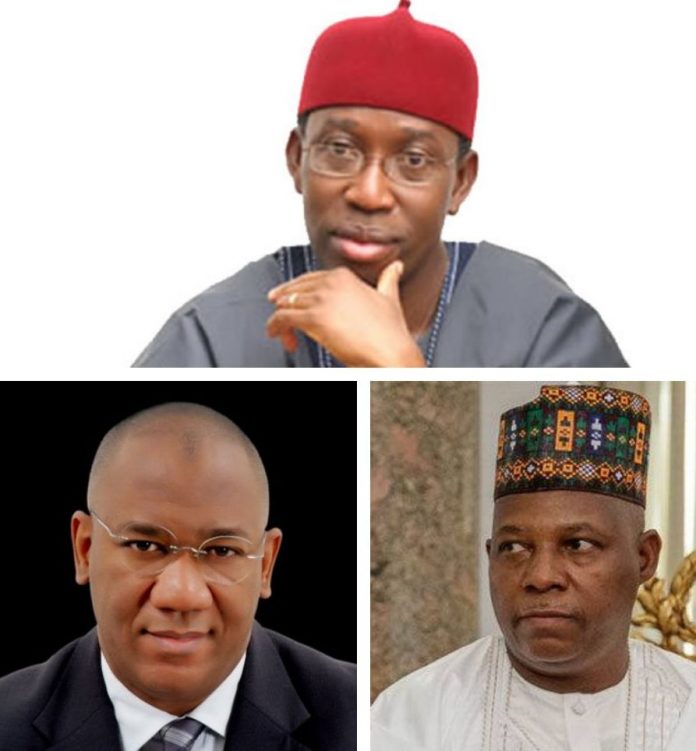 Are the many blunders of APC vice-presidential candidate Kashim Ibrahim Shettima errors, or do they speak to a dangerous mindset to which all Nigerians should pay attention now? Is Alhaji Shettima cleverly setting a plan in the dissimulation model and secretly enjoying the buzz and distraction they create in the media? What is the strategic intent when an otherwise brilliant man commits elementary errors?

Kassim Shettima, former governor and senator, seeks to be vice-president on the ticket of the APC. His candidacy has been contentious as it introduced the divisive Muslim-Muslim ticket into our political lexicon. Significantly, gaffes and foot-in-the-mouth have hallmarked Shettima.

In avowing his love and admiration of the late dictator, Shettima softened the blow regarding other leaders. He stated, “We need a leader with the patience and sense of responsibility and commitment, and somebody who understands the national psyche and mood of the nation of an Abdulsalami Abubakar, and in applicable circumstances, we need a leader with a dose of ruthlessness and taciturnity of General Sani Abacha” He added, “Nice men do not make leaders. We need a leader with intellectual acumen, with a passion for catapulting this nation to a higher pedestal. We need a leader who is not bound by regional or religious sentiment.”

Ruthlessness and taciturnity as admirable attributes? The Oxford Dictionaries define ruthlessness as “the quality of lacking pity or compassion for others”. In turn, the Cambridge Dictionary says ruthless is “not thinking or worrying about any pain caused to others; cruel: ruthless ambition; a ruthless dictator”.

It jars the senses that in the 23rd year of the Nigerian practice of democracy in the Fourth Republic, a person who could be president boldly affirms that he wants to be a ruthless dictator like the late unlamented former dictator who stole so much from the treasury while pretending otherwise. How can a would-be leader be proud in 2022 to associate with the negatives that describe Sani Abacha? Does such a leader not live in an alternate universe different from the reality of Nigerians?

It sounds sinister and ruthless, indeed. Shettima is giving the middle finger to the sensibilities of Nigerians. He does not bother, he affirms.

We remember that earlier, Shettima had positioned himself as the commander in chief and head of security should his team win the presidency. He relegated his principal to economic management. His presentation subverted the roles prescribed in the 1999 Nigerian constitution. Shettima does not care!

Nigerians remember the drama around dressing etiquette involving Shettima, the former corporate executive and executive banker. The fashion police caught Shettima dressed inappropriately at a formal function of the Nigerian Bar Association. The faux pas earned him loud condemnations from citizens, young and old. It became worse when he put a bare-faced lie as a spin on the event. Shettima claimed he ignored the dressing code deliberately to stun his enemies. It was a lame and shameless line. How do you claim you tarnished your reputation merely to shame your critics? What manner of reasoning is that?

Shettima’s latest caper deserves more than a passing interest. Apart from extolling the negative “ruthlessness”, Shettima says, “nice men do not make good leaders”. This concept is straight from the Taliban playbook. Senator Shettima is indirectly telling us that the duo of Tinubu-Shettima will not be nice men as they seek to be “good leaders”. Contrary to his claim, Dr Jennifer Varney of Southern New Hampshire University affirms, “Good leaders possess self-awareness, garner credibility, focus on relationship-building, have a bias for action, exhibit humility, empower others, stay authentic, present themselves as constant and consistent, become role models and are fully present”.

Management literature does not recommend “ruthlessness” as a positive attribute for leaders anywhere. The texts rather speak of “decisiveness”. While one is positive, the other is wholly negative. Is that what Shettima wanted to convey? Would we have to continually second-guess Shettima until the elections or listen to his after-the-fact explanations and rationalisations?

We all remember the many fables about candidate Buhari before the election. One of the claims was that he detested the grandeur of office and all the pomp.  Most of that changed soon after he became president and head of state a second time. Buhari is the leader who got the military band to serenade him with bagpipes and all the paraphernalia suitable for emirs on arrival or departure at the airport!

Nigerians should pay attention to the vice-presidential candidates and put them on a scale. It is a critical duty. For my money, Senator Dr Ifeanyi Okowa stands out of the pack.

Okowa has been a diligent representation of a second-in-command. He does not seek to share the limelight with his principal and, significantly, projects the core of the party’s messaging along the lines of unity, compassion, and ethical rebirth of a traumatised nation.

Compared to Shettima, also, Dr Yusuf Datti Baba-Ahmed stands tall. He has comported himself well, observed the protocols of his position as running mate, and sold the team with emphasis on the principal.