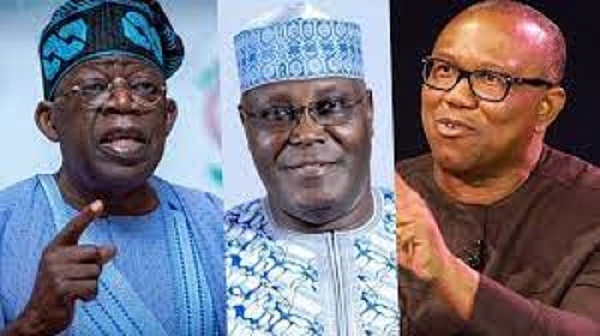 As the nation commemorates its 62 years of independence, the former Vice President, Atiku Abubakar, former President of the Senate, David Mark, former governor of Anambra state and presidential candidate, Peter Obi and former governor of Enugu State, Chimaroke Nnamani have decried the challenges facing the country.

This is even as the President of the Senate, Ahmad Lawan urged Nigerians to remain resolute in the defence of national unity and promote fairness, justice and peace.

Congratulating Nigerians, the presidential candidate of the Peoples Democratic Party (PDP), Atiku assured that the nation will rise again.

The former Vice President in a statement by his media office in Abuja on Friday said that the celebration of Nigeria’s Independence Day is an event that should reawaken our consciousness towards the consolidation of unity amongst the diverse people of the country.

Atiku said that Nigeria has come a long way after its independence 62 years ago passing through different phases of challenges, noting, however, that “the democracy that we have is the requisite antidote to the current challenges that we face.”

As we go into the general elections next year, Atiku Abubakar urged all Nigerians to give the issue of building national unity primary attention. “Nigerians should elect leaders who are individuals with proven track records of being protagonists of unity and peace.”

David Mark on his part urged Nigerians to leverage the 2023 general elections to elect credible leaders that would get the country out of the woods.

In a goodwill message to Nigerians, by his Media Adviser, Paul Mumeh, Mark noted the myriads of socio-economic and political challenges facing the nation but expressed optimism that “the problems are surmountable if we work together.”

He urged all Nigerians of voting age to participate in the electoral process believing that with the improved electioneering arrangement, votes will count and results reflect the wishes of the people.

The former governor of Enugu state and Senator representing Enugu East in the Senate Dr. Chimaroke Nnamani has advocated for inclusiveness, Justice, equity and fairness saying that they are the needed ingredients for peace, unity and progress in Nigeria.

He said peace and unity are the product of justice, fairness, and equity. He urged leaders at all levels to make the citizens the centre of all their programmes and policies.

As campaigns for the 2023 general elections gathers momentum, he urged public office seekers to put the unity and peace of Nigeria above personal ambitions.

The Senator cautioned against resorting to issues like ethnic or religious affiliation during campaigns that may put asunder the cohesion and corporate existence of the country, pointing out that “there must be a country before personal ambition can be realised“.

Meanwhile, the Presidential Candidate of the Labour Party, Mr. Peter Obi, has stated that many Nigerians are already tired and frustrated with the leadership failure that has continued to burden the country for many years, saying that the coming election presents a ray of hope to the people for a New Nigeria if things are done correctly.

Obi made this known in his Independence Day Message to Nigerians. He regretted that at 62, Nigeria has nothing to celebrate; rather, it continues to struggle under the weight of corruption, bad governance, insecurity, a worsening economy, abuse of office and all manner of ills.

He lamented that each new day in Nigeria, instead of heralding progress and development, the people, already weakened by poverty and hardship, are further burdened by new forms of societal malady.

“After 62 years of independence, we are still experiencing the constant collapse of our national grid, as many as 7 times in a single year; our universities have been shut for 8 months; our inflation rate is at an all-time high, as more than half of the population are battling extreme poverty; insecurity and violence are occurring at an alarming rate; oil theft is carried on with impunity and in all fronts – the nation bleeds,” Obi lamented.

He observed that any further slip into retrogression will make the nation uninhabitable for the people. He noted that many Nigerians were looking forward to the 2023 election because it presents them an opportunity to put an end to the leadership failures of the past and usher in a new and productive Nigeria.

The President of the Senate, Lawan, in his message to Nigerians, said the National Assembly would “continue to work for good governance and to strengthen our bond as a nation.

“The Almighty God in His infinite wisdom brought us together in our diversities. He has also preserved our union despite the challenges that we have encountered in nation-building and socio-economic development since our Independence in 1960.

“I salute fellow Nigerians for the resilience of our faith in our country in the face of those challenges. This precious faith in Nigeria and the lessons we continue to learn from our errors and triumphs will help us in building the great and prosperous nation that is our desire and destiny.

Former Senate President, Dr. Abubakar Bukola Saraki has congratulated Nigerians on the nation’s 62 independence anniversary. He further stated that the future looks very bright for the country despite the present situation.

Saraki in a statement signed by his Special Adviser on Media and Publicity, Yusuph Olaniyonu, called on Nigerians to use the anniversary to reflect on the past achievements of the country, particularly the contributions of the founding fathers towards achieving independence and building a united country.

He added that like a part of the national anthem stated, the present generation of Nigeria should ensure that the labour of the past heroes is not in vain as everybody should work to realise the lofty heights the founding fathers envisaged for the country.

“Nigeria remains a country that possesses all the necessary factors for achieving greatness. What is important is for the present generation, both the leaders and the followers, to work for the unity of the country and place the country first before their interests.

“As I rejoice with all Nigerians on this occasion of the 62nd anniversary, let me reiterate my usual words of encouragement and prayers for men and women in the security services who are on the frontlines to protect our country against the non-state actors waging war against her”, Saraki stated.

Governor Dapo Abiodun of Ogun State has urged Nigerians not to despair and be discouraged by the current socio-economic challenges facing the country, but to be hopeful of a better tomorrow.

Abiodun said that Nigeria, like some other nations in the world, is facing an economic downturn and bugged down by insecurity, but with resilience and determination, the country will soon surmount the challenges.

The governor, in a statement by his Chief Press Secretary, Kunle Somorin, saluted Nigerians for their perseverance and called for support as well as cooperation with the government at all levels, especially at this critical period in the country’s polity.

The Chairman of the All Progressives Congress (APC) in Ebonyi State, Chief Stanley Okoro Emegha, has hailed President Muhammadu Buhari and Governor David Umahi over what he described as the duo’s uncommon approach to governance, stressing that they had conscientiously achieved the dreams of the founding fathers.

Emegha noted that the celebration of this year’s Nigeria’s Independent anniversary came with great excitement because, according to him, the ruling APC has entrenched even development in all parts of the country.

He further eulogised President Buhari and Governor Umahi for promoting the spirit of oneness and hard work among the people.

“In Ebonyi, the stories of Governor Umahi’s giant strides abound hence there is no sphere of life you will not see his footprint. He is a silent achiever whose factsheet covers security, infrastructure, agriculture, health, education, economy et cetera”.

The President and General Overseer of United Apostolic Church of Christ (UACC), Rev. Dr. James Bayo Owoyemi has facilitated with Nigerians and those in Diaspora on the country’s 62nd Independence Anniversary.

The statement signed by Pastor Paul Erakhifu, the Media Director of UACC, the General Overseer congratulated the entire citizenry of Nigeria as she celebrates her 62nd Independence.

Rev. Owoyemi further said, “No doubt, God is interested in the existence of this nation despite all odds, he keeps the country intact.” He enjoined Nigerians to be hopeful regarding this country as good and prosperous days will surely come.