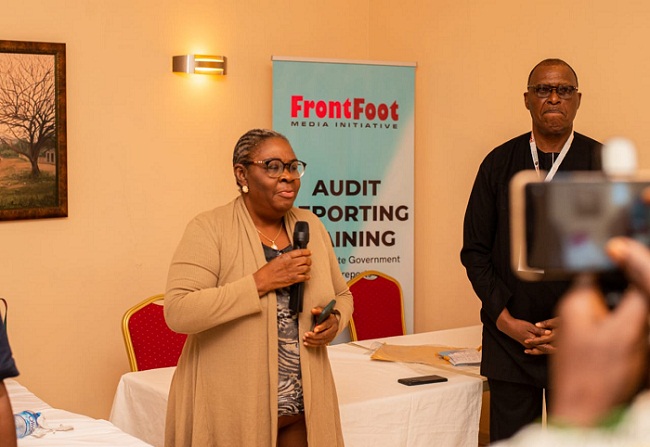 Media and financial experts have counselled that Auditors-General in Nigeria’s 36 states and the media are critical to ensuring the accountability of public officers in the control and management of public funds.

The experts, who disclosed this at the first Audit Reporting Training workshop in Benin on 5-6 October 2022, further advised that both journalists and state auditors-general should follow the dictates of the 1999 Constitution of the Federal Republic of Nigeria to do proper audit reporting.

They said that while the Auditors-General will report their findings to the state houses of assembly, the media will comply with Section 22 of Chapter 2 to ensure that citizens get the information they need.

Participants heard from Chief Chukwuemeka Anika, FCCA and Fellow of the Institute of Management Consultants and Mr Godswell Omenogo, a chartered accountant and auditor.

Chief Anika urged auditors to stay ethical in their audit engagements and to sign only audits that align with their professional, ethical, and moral standards.

Noting the campaigns against corruption, Omenogor affirmed, “These clamours can only be effective if all relevant stakeholders adhere strictly to processes and procedures as enshrined in our laws and related gazettes. Relevant questions need to be asked, adequate information need to be provided, all relevant functionaries need to objectively carry out their respective functions”.

Olumhense declared that auditors-general should play a crucial role in promoting accountability as the Nigerian constitution empowers them. “The Auditor-General of a State is appointed by the Governor on the recommendation of the State Civil Service Commission and confirmed by the House of Assembly. The Auditor-General is not accountable to the governor or supervised by the governor or any other authority”.

Citing six pillars of the legal and professional authority of auditors-general, Olumhense added, “The Auditor-General has the authority to undertake periodic checks of all government statutory corporations, commissions, authorities, agencies, including all persons and bodies established by any law of the House of Assembly of that State.”

Other pillars, Olumhense noted include the fact that “The governor cannot unilaterally remove a duly-appointed Auditor-General unless that follows the intervention of two-thirds of the membership of the House of Assembly asking for such action on such constitutional grounds as inability to discharge the functions of his office or misconduct”.

Further, “The Auditor-General cannot be removed from office before the legal retiring age except in such circumstances as inability to discharge the functions of his office or for misconduct”

He further noted: “The Auditor-General is responsible only to the People through the House of Assembly, and once appointed, can remain in office until he retires or dies. That makes him a powerful, independent institution and servant of the constitution.”

Sully Abu charged journalists to be courageous, ethical, and conscientious in unfolding the contents of audit reports. Emeka Izeze showed the participants various pathways to generating needed information and urged creativity in reportage of subjects such as the audit reports of states.

The Audit Reporting Training-X-raying State Government Audit Reports is a flagship capacity development programme of FrontFoot Media Initiative. It is a Collaborative Media Engagement for Development Inclusivity and Accountability Project, a targeted training of journalists.

FrontFoot Media Initiative is undertaking the project under the auspices of the Wole Soyinka Centre for Investigative Journalism (WScIJ) and the sponsorship of the MacArthur Foundation.

The next session of the Audit Reporting Training will hold in Awka, Anambra State on 17-18 October. There will be sessions in 2023 and 2024 as part of a phased roll out.

2023 PRESIDENCY:  Time For NDIGBO To Back Senator Pius Anyim

Why Soludo Can’t Succeed Without ASATU