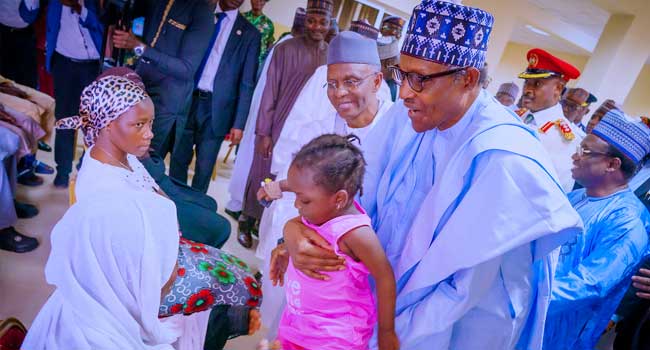 The remaining 23 train passengers taken hostage by Boko Haram terrorists have been released, much to the relief and satisfaction of the Christian Association of Nigeria (CAN) leadership.

We applaud President Muhammadu Buhari for this development, which serves as a guide for the Federal Government’s fight against our shared national foe, insecurity.

This was contained in a statement personally signed by Christian Association of Nigeria (CAN) President, Archbishop Daniel Okoh which was made available to newsmen in Abuja.

The statement reads: “The successful release of the last few hostages in accordance with the President’s earlier order not only shows that the authorities are serious about their work, but also that they have the political will to put an end to the reign of terror in some part of the nation.

“CAN also laud the military and all other security and intelligence agencies for the successful conduct of the operation which led to the release of the hostages. They have shown outstanding capabilities in recent times and the whole world will not fail to take note of their good efforts.

“We believe that with the necessary support and adequate motivation, our security forces are capable of deploying world-class kinetic and non-kinetic processes towards accomplishing difficult military operations that will ensure the safety of lives and properties on the land.

“Therefore, the relief that came to the nation arising from the closure of the six-month captivity of the innocent train passengers must be sustained at all times.

“We must not allow the return of the days when terrorists had a free hand to do as they wished to unsuspecting travelers. Every Nigerian must be allowed to have peace, whether at home or in transit”.

The statement continues: “We appreciate the doggedness, resilience, and hope which the 23 train victims maintained all through the more than 190 days they spent in the hands of their captors even under torturous conditions.

“CAN especially commend 21-year-old Azurfa Lois, one of the captives who were reportedly unflinching in her faith in Christ Jesus, despite threats by the terrorists to marry her off to one of them and forcefully convert her to another faith.

“Her story is a testimony that God Almighty, who watches over his people will neither sleep nor slumber, but will sustain and rescue them even from the throes of death.

“We also congratulate all the families of the train victims for having them back alive and encourage them to understand that the unpleasant circumstances they have gone through since the night of the attack will produce the godly fruits of endurance, good character and hope, for God Almighty still speaks to his people in every situation

“We will continue to pray God Almighty to grant us lasting peace and security in the country”, the statement further stated.

Buhari Presides Over A Strategic Meeting In Brussels

Excitement As Soludo Remembers Akpaka Road After Decades Of Abandonment