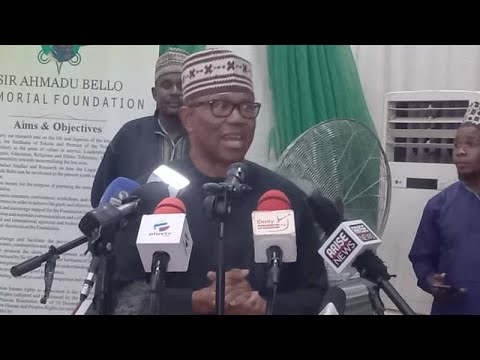 The presidential candidate of the Labour party, Mr. Peter Obi has reiterated his readiness to bring peace to Nigeria and quicken the development of every part of the country. Obi said this while speaking to Northern Elders’ Forum at Arewa House, Kaduna on Tuesday.

On how he would achieve it and also while answering questions on why he is yet to condemn the Monday sit-at-home in the East, Obi said hewrongdoingsnued to condemn wrong doings in any part of the country and that he would not condone such in any guise. He said the overriding interest of Obi-Datti Presidency was to make Nigeria a better country, restore security and secure the future of the country through massive support for education.

HoweverforObi said that his tactics of fighting agitators would be different. Explaining, he said that he would consult, discuss and dialogue with them and find out the substance of their agitations. Insisting that even the most intractable problems in the world had been solved through dialogue, he said he would consider other options only after he had exhausted reason.

It will be recalled that that was exactly what he did when he became the Governor of Anambra State. Through dialogue, he was able to solve internal agitations within the state. In the case of NARTO (National Association of road transport Organisation) , he called them severally for dialogue but only used force when they proved impervious to reason.

MeaMrile, the Media Office of Mr. Peter Obi has clarified the statement on Eastern Security Network (ESN), their principal was actually commenting on Ebubeagu Security Network formed by the Governors of the South-East to tackle rising insecurity in the region.

Socialite, Owner Of Adekaz Hotels Wanted In Connection With Drugs