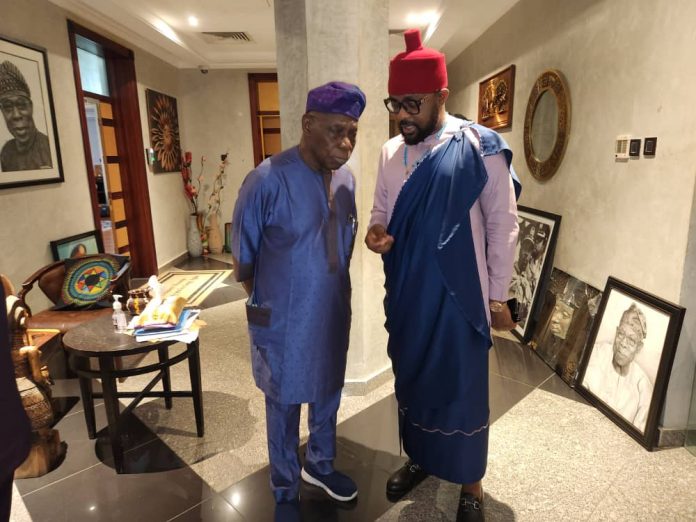 Ugochinyere, who is the Peoples Democratic Party (PDP) House of Representatives candidate for Ideato North and South Federal Constituency, had met with Obasanjo, shortly after his return from Ethiopia and Congo.

The Opposition Spokesperson, who visited Obasanjo for a scheduled meeting went into the closed doors that lasted close to an hour where a wide range of issues from the credible election, state of the nation, peacebuilding and stability of Nigeria and Africa, to the upcoming election was expansively discussed.

Speaking to the media after the strategic meeting, Ugochinyere said the Opposition family is pleased with Obasanjo’s efforts and acts of statesmanship in Nigeria and Africa and pleaded with the former President to intervene and ensure that Nigeria’s 2023 election is credible and held in compliance with the law, in an atmosphere that is open, participatory, free and fair.

The CUPP Spokesperson said he used the opportunity to appreciate and extend the commendation of the Opposition to Obasanjo’s peace-building interventions in Africa, especially in Ethiopia where the warring factions are about to resolve all issues that have led to many years of bloodletting and crisis.

He added that Obasanjo’s intervention is also needed more now at home where many pressing challenges have created tension, economic crisis and mutual distrust which have now become potential threats to a peaceful election and transition.

The spokesman added that the situation urgently calls for Obasanjo’s prowess in international advocacy before it’s too late.

Ikenga praised Obasanjo during the visit for the strong institutions and sectors he built during his reign from telecom to road infrastructure, anti-corruption institutions and due process, most of which are now being abused with just a few still standing and holding back Nigeria from total collapse.

The opposition pleaded for Obasanjo’s fatherly intervention as an international statesman, to step out and actively get involved in using his respected global reach and advocacy to ensure Nigeria’s democracy and upcoming election are conducted in an atmosphere of a free, fair and participatory election where the electoral rules are obeyed.

The Opposition Coalition stated that at this moment, Nigeria needs the fatherly support of Obasanjo and his international allies to ensure that Nigeria is not undermined and elections are credibly conducted without intimidation or interference of the opposition parties, or clampdown, manipulation or intimidation of electoral institutions in any way.

Ikenga Imo Ugochinyere conveyed the goodwill message of good health and prayers of longevity to the former President and urged him not to depart from his lifelong ambitions of seeing Nigeria succeed and democracy fully established in Nigeria and Africa.

The former President who was beaming with smiles while escorting the opposition chieftain out appreciated the visit and discussion and wished the opposition delegation, a safe journey back.