The Economic and Financial Crime Commission (EFCC), during the first week of November 2022, played its old game to excite the passions of Nigerians. EFCC got 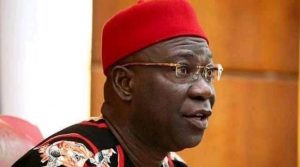 a court sentence authorising the temporary seizure of 40 properties it claims to belong to former Deputy Senate President Ike Ekweremadu. There was no hearing and defence by Ekweremadu marooned in a London jail on court orders.

EFCC released photos of buildings allegedly belonging to Ekweremadu. Excitable Nigerians have gone gung-ho over the matter. Methinks we should interrogate the issue more deeply. There are many angles to it worth examining.
Folks in incredulity ask how the Senator could have acquired such properties if not by corruption. They forget that Ekweremadu has been a “government picking for almost all 23 years of the Fourth Republic. He was a local government chairman. Then served as Chief of Staff to Governor Chimaraoke Nnamani of Enugu State. He has been in the Senate since 2003. Corruption may be part of it, but it is feasible to acquire an average of two properties yearly with his earnings and access.
Our National Assembly, by all reckonings, pays one of the highest remunerations in the world. It is thus FEASIBLE for Ekweremadu to acquire 40 or 50 properties from legitimate income all those years. Indeed, most average middle-class Nigerians have at least two properties from their income: a house where they work and live and a house in their natal origins. Those in well-heeled jobs in banking, oil and gas and international agencies own properties in Lagos, Port Harcourt, or Abuja and the former regional capitals of Ibadan, Kaduna, Enugu, and Benin.
However, forty properties for one man are OFFENSIVE. His position as a public officer makes it more objectionable. Every man has the right to decide how he spends his money or what he acquires. Position or standing in society tempers that right. Ekweremadu as a public officer, ought to pay attention to how people will perceive such loud material assets. The howls are about greed. Note that no one would know if he had invested in less visible items.
The acquisitiveness focused on properties in Enugu, Abuja, USA, and other foreign locations sends an offensive signal. Note that the EFCC did not mention among these properties items such as schools, hospitals, laboratories or similar properties dedicated to serving the public interest. Zilch.
Despite the preceding, the EFCC has failed to prove illegality. The Nigerian State has deployed underhand tactics. EFCC got a court declaration by sleight of hand after previous failures in the normal court process to indict Ekweremadu. Ekweremadu’s properties remain LEGAL until EFCC proves otherwise in court.
As explained in a reference document, “An ‘ex-ppartnercourt proceeding is brought by an applicant in the absence of the respondent”. Courts grant exparte injunction against a defendant who the prosecutor has not served. “This type of injunction is most used In Situations of Great Urgency and generally only lasts for a restricted period. The exparte application must be reserved for very special circumstances”.
Pray, what is the situation of great urgency on this matter that has existed since 2016? Has the Nigerian State sold Ekweremadu down the tube against his appeal in England on 7 November? What is the urgency, and what are the exceptional circumstances of this case? The Nigerian judiciary again subjects itself to negative scrutiny after it failed in simple electoral mathematics and made number four the first in a state in the South-East. It has now performed a judicial ambush and aided state capture.
The State ought to lead in morality and legality. The Nigerian State has performed worse than citizens and public officers with 40 properties worldwide. The Nigerian State should conduct its affairs in ways that promote belief and confidence.
EFCC has proven not to be different, as its boss would want us to believe. It has done the regular media trial, sending out to media houses photos of the alleged properties to excite mass hysteria. We ask the EFCC to diligently investigate and win its cases in court rather than in the media.
In all, the Nigerian State short-changes the citizen. Two wrongs never made one right. Indeed, EFCC insults us all through its failure at due diligence and the attempt to hoodwink us with trial outside the court.

IPOB’s Sit At Home Order Has Chased Businesses Away From South...