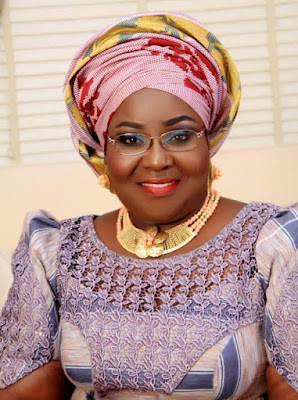 Former Commissioner for Information and Communications and an ally of Rt. Hon. Rotimi Amaechi, the immediate past Minister of Transportation, Dame Ibim Semenitari has rejoined the People’s Democratic Party, PDP in Rivers state.

Ibim was received back to the PDP family by the Executive Chairman of Okrika Local Government area, Hon Akuro Tobin, former ComDrsioner for health, Dr. Sampson Parker and other notable stalwarts of the party on Saturday.

The Former Managing Director of the Niger Delta Development Commission (NDDC) rejoined the Peoples Democratic Party (PDP) some months after she resigned from the All Progressives Congress, APC on

She dumped the APC in July 10, this year, after transmitting a formal letter to her Ward Chairman in Okrika Local Government Area of Rivers State. Though she did state her reason from leaving the party, many believed that it was due to the leadership crisis that sparked a gale of defections in the party.

“I appreciate the friendship, camaraderie and opportunity that this platform has provided me to serve my state, region and country, even as I wish the party well. Please be assured of my regards always”, she stated in her resignationmostter.

Virtually, must of the closest allies of Amaechi dumped the party and joined other political parties to contest for the governorship of the state in the 2023 general elections.

Speaking with SUNDAY INDEPENDENT exclusively in a telephone interview on her reasons for returning to the PDP, Ibim said “my first political home was the PDP. I moved with my former boss (Rotimi Amaechi) who was the leader of the PDP in Rivers state until when the party structure was taken away from him.

“Every politics must benefit the people. I left treasons for a personal reason. I could not provide for my teeming supporters and those who saw reason to belong to the APC because of me”, she said.

Ibim went on to posit that her father (Chief Gabriel Tobby) was a deputy Governor former governor, Dr Peter Odili on the platform of the PDP in Rivers state, adding that, it was only expedient that she returned to her former “political home”

Speaking further, the former Acting MD of the NDDC stated that “now that an Opobo son (Sim Fubara) is contesting for the governor of Rivers state on the platform of the PDP, we all must support him to win the election in 2023.

The Vice President Is critical, And Ifeanyi Okowa Stands Out

Borno Inks N11.5bn Contract For Construction Of Roads In Maiduguri

Arewa: We Can’t Be Intimidated Over Call To Probe NNPC In...