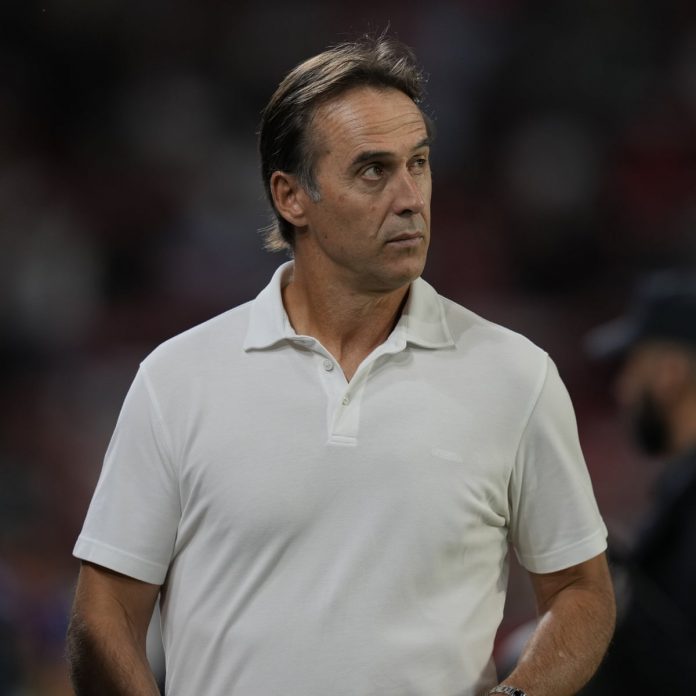 Wolves have appointed Spaniard Julen Lopetegui as their new manager after he had initially turned them down.

The 56-year-old will take charge on 14 November, when the Premier League pauses for the World Cup in Qatar.

Lopetegui was the club’s first choice to take over after they dismissed Bruno Lage on 2 October but he opted to stay at home to be near his elderly father.

“Julen is a top coach, with excellent experience at an elite level of the game,” said Wolves chairman Jeff Shi.

“Since the very beginning, Julen has been our number one choice to manage Wolves, and we look forward to welcoming him and his team when they join us in the coming weeks.”

Lopetegui’s first match will be away to Everton in the Premier League on 26 December.

Lopetegui was appointed Sevilla boss in June 2019 and led the club to the Europa League title in 2020.

His Wolves predecessor Lage was sacked after a run of one win in 15 Premier League matches, going back to last season, with caretaker Steve Davis currently in charge.

The club had previously said Davis would remain in charge until 2023 after QPR boss Michael Beale rejected the job.

Wolves have lost three of their past five games under Davis and are second from bottom of the Premier League – two points below Southampton, who are just outside the relegation zone in 17th.

They play Brighton at Molineux on Saturday at 15:00 GMT, host Leeds in the EFL Cup third round on Wednesday and then play Arsenal on 12 November in their final game before the World Cup break.

Lopetegui, who was due to coach Spain at the 2018 World Cup only to be sacked days before the tournament after accepting an offer from Real Madrid, is familiar to Wolves chairman Shi.

The pair spoke about Lopetegui becoming Wolves manager in 2016 following the takeover of the club by Chinese conglomerate Fosun.

Instead, he coached Spain and then Real Madrid – lasting just 138 days in charge of the latter before being sacked after a 5-1 defeat by Barcelona – before joining Sevilla in June 2019.

A former goalkeeper, Lopetegui played for Real Madrid and Barcelona and won one cap for Spain.

We’ve seen with Sevilla, he brings more than football; football that is physical but has to do with tactics, possession, dominating games, and attacking. When it worked well at Sevilla, it was wonderful to see.

I’ve always said Sevilla was the most ‘Premier League club in Spain. The high tempo, the diversification of the tactics, and the good use of collective answers for a team that wasn’t the best individually – Lopetegui made the players better and the team compact, but always with the possibility of winning.

All that led to a Europa League win for Sevilla and showed that Lopetegui can maximise the potential of a team as one of the top managers around.

Between a club that was not investing in players properly having lost [Jules] Kunde and Diego Carlos for instance, and a manager that had squeezed a lot out of a side that was not properly recycled, all that meant it had to come to an end.

He had taken Sevilla into the Champions League for three consecutive seasons, something that hadn’t happened before. I felt he was tired; mentally and physically. He has to give a lot of energy, something new was needed for him as well.

He took time off, his dad wasn’t in a great place and he wanted to be close to him. It took priority, and Wolves said they would wait when Lopetegui said no.

Things have developed, not for the better, which means Lopetegui is rested and has given time to his dad. There is not much that can be done; he finds himself in a place where he is ready to work again, full of energy.

This is going to be one of the hardest things in football, changing a negative dynamic. But he has seen the potential of the side, he knows they are going to get better. Congratulations, Wolves fans, this is a great choice.