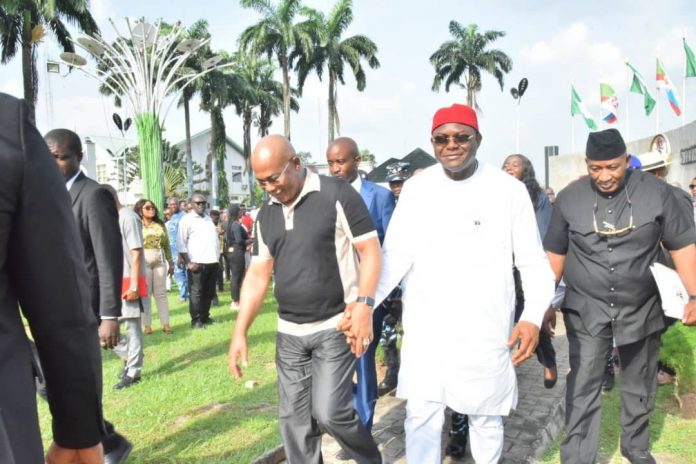 Governor Hope Uzodimma of Imo State has decried what he calls marginalisation within marginalisation in the Niger Delta Development Commission (NDDC), appealing to the new leadership to revisit the original intention for setting up the Commission.

He made the remarks on Friday when the Acting Managing Director of the NDDC, Eng. Emmanuel Audu-Ohwavborua led a team of his top management staff on a courtesy call to the Governor at Government House, Owerri.

During the visit, the Commission presented some drugs to the government which the Managing Director said were meant for designated hospitals in Imo State.

Governor Uzodimma said over the years past NDDC leadership resorted to a maintenance approach to solving problems affecting the member states as opposed to projects conception and implementation, noting that from the Act establishing the Commission, so manyt hings have been left unaccomplished.

He regretted that even in the area of interventions, some of the states like Imo as a critical stakeholders in the oil and gas haven’t been treated fairly.

For instance, the Governor noted that a typical example was during the Covid-19 pandemic era when the Commission was expected to come to the aid of the State, but it was nowhere to be seen notwithstanding that it featured prominently in other NDDC states.

He reminded Audu-Ohwavboua of the need to intervene immediately on the Elele-Owerri corridor of old Owerri-Port Harcourt road as well as on the Mgbidi-Awomama axis of Owerri-Onitsha road in his emergency programme ahead of yuletide as both corridors are key to major movements involving indigenes of the state and other road users.

Besides, the Governor also solicited the intervention of the NDDC in the flood-ravaged communities of Imo State like Ohaji/Egbema and Oguta local government areas as a way of further cushioning the effects of their hardship.

He described the Acting Managing director as one who is “able, capable and can solve the problems in NDDC.”

Governor Uzodimma expressed delight over his appointment, saying that he “possesses good knowledge of the terrain and has demonstrated capacity in the various positions he has held.”

He charged him to solve the problems of the NDDC, a Commission he described as a “child of circumstances set up to alleviate the sufferings of the oil-producing states.”

His words: “Go back to the original intention of setting up the Commission so that the impact will be felt by our people.

“Each time they say we are a member, why is intervention not coming to Imo State, but going to other states? Repair Elele to Owerri road and also repair the bad sections from Mgbidi to Awommama under your emergency programme.”

Earlier in his address, the Acting Managing Director who was the former Director in the Delta State office of NDDC, said it was an “auspicious moment to be in Imo State at this time to present drugs with the flood disaster in some riverine communities in Imo State.”

He agreed with the Governor that there are problems but reassured him that he will start from the onset to solve the problems facing the Commission.

“We are technocrats. We don’t make promises we are not ready to honour. Be rest assured that the marginalisation has ended.”

The high point of the visit was the handing over of the drugs to the Governor, witnessed by top government officials from Imo State and those from the NDDC.