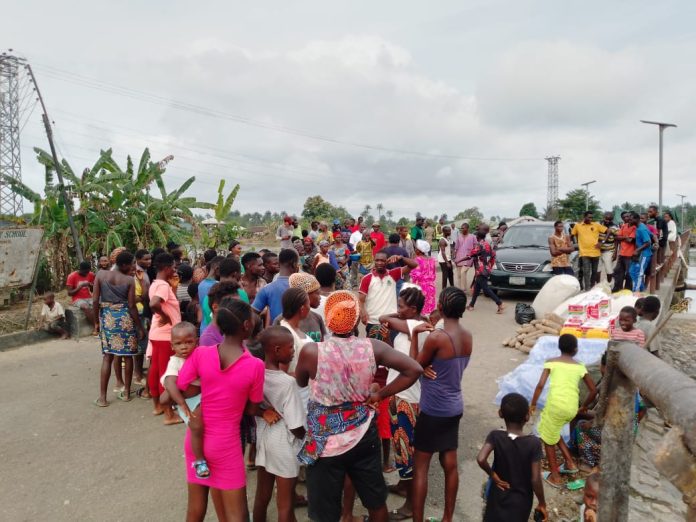 The Health of Mother Earth Foundation (HOMEF), has donated some relief materials to the Ikarama-Okordia in the Yenagoa Local Government Area of Bayelsa State, to cushion the effect of this year’s flood disaster on the impoverished people of the community.

Nnimmo Bassey, the Executive Director of HOMEF, “an ecological think tank organisation advocating for environmental/climate justice and food sovereignty in Nigeria and Africa at large”, delivered the relief items through the Environmental Rights Action/Friends of the Earth Nigeria (ERA/FoEN), Yenagoa, to the oil spill-ravaged community.

Items donated include bags of rice, beans and onions; yams, palm oil, cartons of noodles, among others.

Speaking at the community, the project officer and head of Niger Delta Resource Centre at ERA/FoEN, Alagoa Morris, who led the team, said that Nnimmo and the HOMEF family were concerned about the wellbeing of Ikarama people, who are host to oil facilities in the area, in the midst the deluge.

He said, “These things (flood relief materials) are not brought to you by ERA. We stand here as ERA to deliver these things to you. But they are donated by the Health of Mother Earth Foundation (HOMEF), which is established by Reverend Nnimmo Bassey.

“Not long ago, he organised a town hall meeting here in Ikarama. He was the former head of ERA/FoEN (in Nigeria). He knows Ikarama very well and he sees Ikarama as his own community.”

Morris recalled that while still serving as the head of ERA/FoEN in 2012, Nnimmo ensured that the environmental rights organisation reached out to the people of Ikarama with succour as a result of that year’s flood disaster.

“This year (2022), he is also concerned about Ikarama people and has made these things available to you due to the flood. As we speak, he (Nnimmo Bassey) is in Egypt attending COP27 (United Nations Climate Change Summit Africa, hosted by Egypt) to talk about climate change otherwise he would have been here personally.

“So they called us at ERA and asked us to deliver these things to you people. That’s why we are here”, the activist said.

Receiving the items, the paramount ruler of Ikarama, Chief Gospel Okah, thanked HOMEF for demonstrating care and empathy towards the community people and prayed God to help the ecological group, while commending ERA/FoEN for the handover.

A Review of ‘Media, Politics and Power in Nigeria’

NDE Trains 30 Youths On Running Own Businesses In Delta