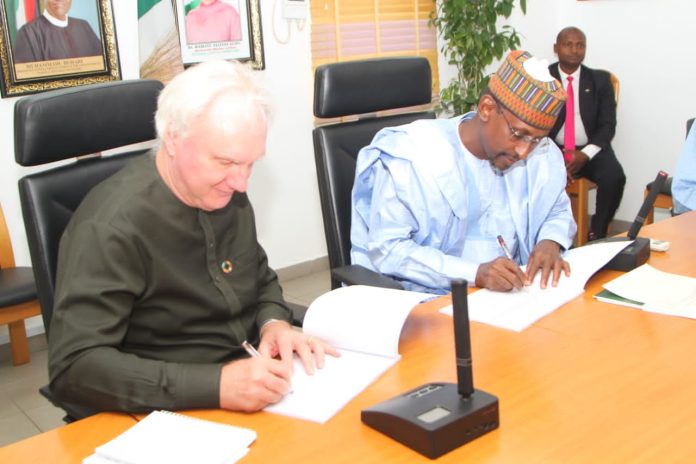 A collaboration between the Federal Capital Territory Administration (FCTA) and the United Nations (UN) will be extremely beneficial for the FCT’s agriculture, health, and education sectors.

Malam Bello thanked the UN for its participation during the brief signing ceremony that took place in his office and assured that the FCTA will support UN activities in the Territory.

According to him, “Frankly I am satisfied with the support we receive as a city and as a Territory from the UN family, and I assure you that we will continue to partner with you on this intervention and all the things that you do for the FCT.

“I am very happy that a new cooperation framework is being considered with the federal government of Nigeria and as usual we hope that you will create a window of opportunity for the FCT because we are happy with your interventions and we want to partner more closely with you”.

Speaking also at the event, Mr Mathias Schmale said that e (1) Governance, Human Rights, Peace and Security, (2) Equitable Quality Basic Services, and (3) Sustainable and Inclusive Growth and Development. He equally revealed that the UN was about to sign a new cooperation framework with the Federal Government

Shedding more light on the partnership and what it portends for the FCT, the Secretary, Economic Planning, Revenue Generation and PPP Secretariat, Hon. Agboola Lukman Dabiri said that FCT residents ultimately stand to benefit a lot from the partnership with the United Nations.

He said: “First is the opportunity to be among the four states to be picked in Nigeria. There is a lot to be gained in terms of improvement in facilities. FCT at the moment is over-stretched because of the number of people coming into the Territory. Health, Education and even sanitation are stretched. This kind of support goes a long way in meeting our challenges in this regard and the residents have a lot to gain”.

Dabiri also explained that a major component of the agreement was capacity development.

He said “The top priority among projects approved is capacity build-up. It has a lot of significance because it shows that there is a good future for us. It is not always about putting down money, and building roads and other facilities. It has to go with capacity build-up which is about maintaining these roads and facilities and how we can sustain them for the future”.

Areas of capacity building, he said, include support for Primary Healthcare Centres, training for medical officials, training on Children’s rights and facilities to improve schools

Present at the signing ceremony were officials from the UN, the FCTA Permanent Secretary, Mr Olusade Adesola, Chief of Staff to the Minister, Malam Bashir Mai-Bornu, Secretary, Education Hon Sani El-Katuzu, Secretary for Health and Human Services, Dr Abubakar Tafida, the Assistant FAO Representative in Nigeria, Mr David Fehintola and other officials of the FCTA and the UN.

Blinken Reiterates Importance Of Freedom Of Expression, Access To Information