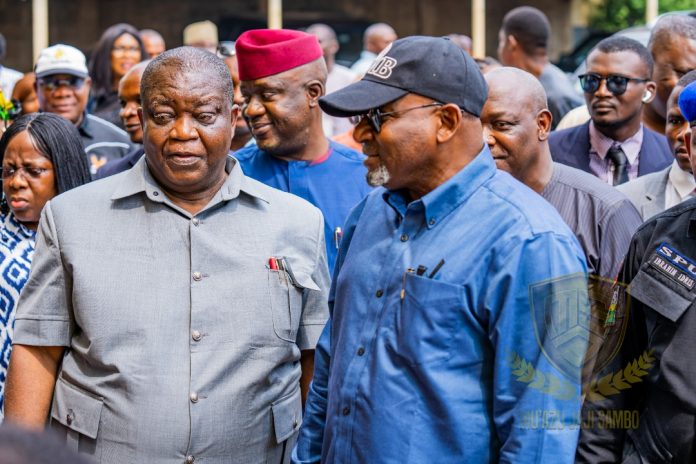 The Minister of Transportation, Mu’azu Jaji Sambo had said that the President Muhammadu Buhari-led administration had laid the foundation for a 25-year infrastructure plan.

The Minister said that the whole country would be connected by rail while trying to connect every state capital.

“I don’t have to tell you the advantages that railway brings so by the time that plan is achieved, the whole country would have been connected.

“Already we have the Eastern line. It’s been rehabilitated from Port-Harcourt to Maiduguri, we have the western line from Lagos to Kano, the narrow gauge is operational and the new standard gauge, Lagos-Ibadan which we are on now is already operational.
“Abuja-Kaduna is operational, Kaduna Kano is being constructed and other sections and stations are also being constructed.
“Now we have the central line running from Warri to Itakpe, which is operational and ultimately that same line will also link up with Abuja so that if you live in Delta State, you want to come to Abuja, you have no business going by air or road.
“At the end of the day, the entire country would have been connected by a network of railways that would make life easier for passengers’ movement in large volumes and movement of goods,” he said.
The Minister emphasised that railway Infrastructure is a bedrock of social economic development and that the next administration should build up on what the present government is doing.
He revealed that a ministerial retreat was also recently held to score the performance and the mandates given to each ministry.
‘The essential features of this retreat were to review the performance and see what has been achieved and also lay the foundation for a transition for the incoming government. By the way, the President has made it very clear that this government will work every day until May 29., 2023.” he added.
Speaking on the importance of linking the railway to the ports, Sambo said he recently paid a visit to the Comptroller General of Customs to take him up on several issues that are of concern to the Ministry of Transportation, particularly the Apapa ports.
Sambo said the government is continuous and it is important that a transition plan take place so that subsequent administrations can build on what the present administration is doing.
“When the Buhari administration came to power, there was no transition plan from the PDP government. Nothing at all to build upon and we felt it was wrong, we needed to correct it as part of governance.
“Even if you are handing over to an opposition party, give them something to build upon. Government is continuous. So you must prepare for the next coming government.” He said
The Minister further urged Nigerians to ignore sentiments and commend President Muhammadu Buhari-led administration for his commitment to infrastructure development.
Sambo said politics should be set aside and honour should be given to whom it’s due, especially when it is obvious that the present administration has completed almost all projects abandoned by previous administrations.
He added that President Muhammadu Buhari-led administration has improved the security architecture of the country and also the revenue-generating power compared to the lad administration.
“Before this present administration, a lot of communities in the North were under the control of terrorists but look at it now. Business is back to normal and there is peace.
“Then we would come down from our vehicles and raise our hands while passing by military checkpoints. It’s been a long time since we had incidents of such now.
“You see, we cannot live without challenges but the ability of government to respond to challenges in the interest of the citizens is what is paramount and why shouldn’t we be appreciated,” he said.