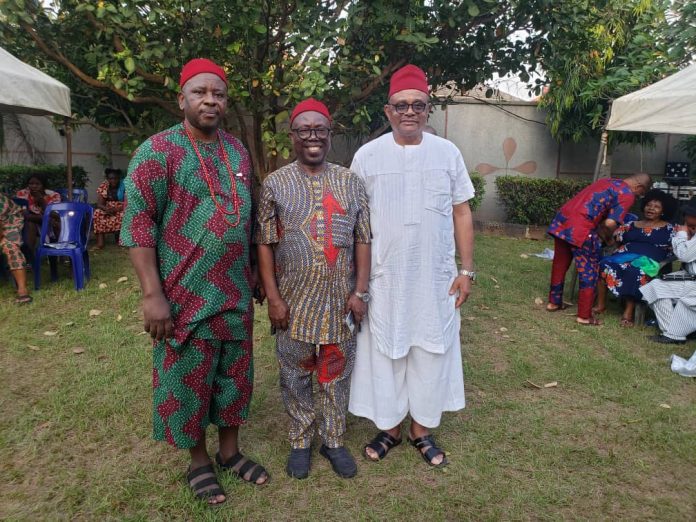 Chief Joe-Martins Uzodike, Anambra State Coordinator of Peter Obi Presidential Campaign Council, has expressed optimism that with the massive support being given to the presidential candidate of the Labour Party, Peter Obi and his running mate, Yusuf Datti Ahmed across the country, the sky would surely be their limit in the 2023 general elections.
Uzodike who made the observation at a town hall meeting organized by members of the Labour Party, LP in the Obosi electoral ward, in conjunction with Peter Obi support groups at Obosi in ldemili North Local Government Area of Anambra state, said he was impressed by the accolades being given to Obi in the core north and middle belt by these northern and religious leaders during his consultative forum with them.
Uzodike who has a chieftaincy title of Dike Udo Awka-Etiti,
therefore charged members of the labour movement in Obosi ward and beyond, both those who are still in other political parties to fuse into the labour party and join hands in ensuring a resounding victory for Obi and the party during the elections.
According to Uzodike, “If I tell you the calibre of personalities in the core north that have given their blessings to Obi, you will be marvelled. But I will not stand here to mention their names for some reasons best known to me. All you need to do is to muster your own support and see what will happen during and after the elections”.
He disclosed that some of the northern elders, retired generals and religious leaders have even told Obi that his victory and ascendancy to the Presidential seat would mark the real end of the civil war because all forms of agitations would come to an end, more so when it is quite obvious that the Southeast geopolitical zone deserved to take the slot at the presidency this time around.
He also quoted some of them as saying that with Obi on the seat, those who destroyed Nigeria would turn round to rebuild it, even as he said they assured Obi that his labour would never be in vain, adding that he should prepare himself for the arduous tasks ahead as the next president of Nigeria because of his humility, intelligence and focus on Nigeria’s prosperity.
Earlier in their introductory remarks, the chief hosts of the town hall meeting, Chief Hyman Udemba (Akamkposi Obosi) and Chief Chidebe Umolu (Akpeh Obosi) disclosed that no fewer than 2,500 supporters of Obidient movements have so far decamped from other political parties to the Labour party and are now scrambling to get the party’s membership cards so as to integrate themselves fully into the mainstream of the labour party movement.
Udemba and Umolu who were highly elated by the presence of prominent political heavyweights at the town hall meeting which took place at Chief Umolu’s residence told the audience that they were mandated by the Labour party leadership to leave their respective abodes in Abuja and Lagos and relocate to Obosi to coordinate the activities of the party in their respective wards to ensure victory for the party.
Udemba and Umolu who were invested in patrons’ positions of the Labour party in the Obosi ward, expressed optimism that Obi would win the election because of his wide range of acceptability by the mass movement.
They, therefore, urged all Obosi sons and daughters to jettison every other political party that usually lures them with peanuts and join the Labour movement as according to them, when the chips are down, a labourer would be rewarded accordingly.
According to Udemba and Umolu, “from all indications, this contest is divine and already ordained by God Himself in the spiritual realm but it is the responsibility of the labour movement to work assiduously for the victory to manifest in the outward realm”.
In his speech, a prominent member of the labour movement and retired Deputy Inspector-General of Police, DIG, Celestine Okoye, recalled that he had worked for other political parties in the recent past and discovered that they were a bundle of liars with queer characters, adding that his decision to join the labour movement was born out of his belief that Peter Obi’s victory would bring the dwindling fortunes of this country back to life.
Okoye who has a chieftaincy title of Ozo Abilikete of Awka urged all the Obidient movements to collapse their structures into the labour party as the vehicle with which they would convey Obi to victory and through which they would be recognized at the time of reckoning.
Anambra State Chairman of the Labour party, Chief Ugochukwu Emeh commended all the party faithful and all the Obidient movements for their efforts so far and urged them to redouble their efforts towards the actualization of the visible victory for Obi in particular and the party at large.
Emeh, therefore, charged all and sundry to ensure they arm themselves with their PVCs in preparation for the voting exercise since according to him, the only instrument they have to actualize this victory which he said has already been designed by God is to cast their votes on the election day.
Others who spoke at the event were the labour party candidate for Idemili North state constituency, Kingsley Udemezue; Archbishop Eugene Nwabueze of the Peter Obi Solidarity Movement; Rotarian Chukah Ifekandu, state/local government coordinator of Peter Obi/Datti Yuseful Movement, as well as Hon. Mark Osakwe, chairman of the party in Idemili North local government area.
Chairman of the party in Obosi ward, Chief Justin Amechi Ezenwabude and a woman stakeholder, Nneka Ugwunze (Ijele Nwanyi) who identified Udemba as a political strategist and Umolu as a renowned economist, expressed satisfaction that their arrival in labour party has added a new dimension to the prospects of the party in Obosi Ward.
They noted that the duo are men of integrity and are widely respected with a high level of followership in Obosi and neighbouring communities.

Obi Assures Of Equal Representation Between The Rich, Poor

Nigerian Govt Shuts Down Operation At Oilfield Over Oil Spill