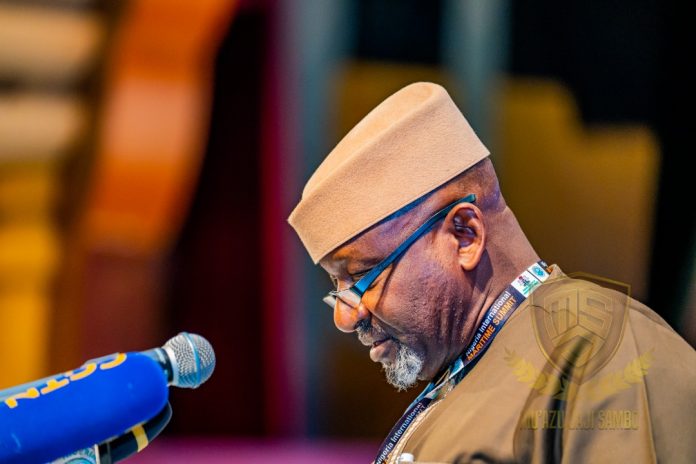 The Federal Government has expressed its readiness to lift the suspension order on Niger dock following its willingness to abide by the rules and its contributions to the growth of the National economy.

Addressing the Chief Executive Officer, Nigerdock, Maher Jarmakani and other officials of the company, the Minister pointed out that the reason why they were suspended was as a result of complaints from other Terminal Operators, saying Nigerdock had operating advantages over them.

“What led to your suspension was that I received complaints from Terminal Operators, saying that you are not on the same level with them. In the sense that they pay more to the government than you do. You’re likely to attract freight at a much lower cost to the detriment of businesses”,  the Minister disclosed.

He, therefore, urged them to liaise with Nigerian Ports Authority (NPA) to work out all the operational licenses needed to enable them to operate and the latter will forward the same to the Minister of Transportation whose prerogative it is to give approvals.

Speaking further, the Minister said: “We will never do anything to undermine the things you are doing here in terms of generating wealth and jobs for Nigerians.  The only thing we are saying is that the law should be followed. We should not encourage lawlessness “.

Responding, the CEO, of Nigerdock, Maher Jarmakani, said the firm has taken notable steps in this regard as they have been granted bonded permits by the Nigerian Customs and they are currently working with Nigerian Ports Authority to ensure all processes of getting the needed approvals are followed accordingly.

“We are seeking your support Honourable Minister and that is why we wrote a letter of appeal for your guidance and your support to see that we have followed all processes and procedures” Jarmakani stated.

Furthermore, Jarmakani informed the Minister that in the 30 years of its existence, Nigerdock has employed more Nigerians than its peers, assuring that the company will not undermine the country’s extant rules and regulations.

The Masses As Instruments

NNPC Has Not Taken Over Road Construction, Fashola Clarifies

Plateau Of Crises And Death

Apprehension Escalates Over Use Of Afghanistan For Sheltering, Training, Financing Terrorism