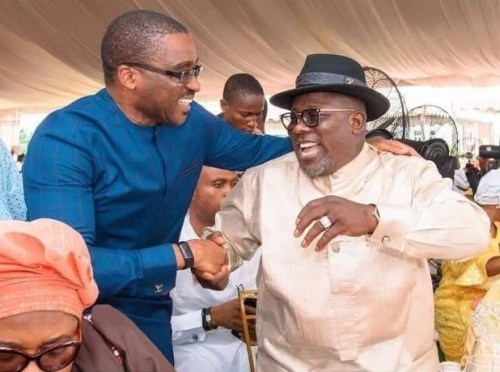 The Delta State PDP Governorship Candidate for the 2023 Governorship election and the Speaker, Delta State House of Assembly, Rt. Hon. Sheriff Oborevwori, on Monday, November 28th, 2022, told the people of Ughelli North Local Government Area that his agenda and that of Olorogun David Edevbie whom he contested with are one, as they are all geared towards the development of the State.

Speaking during the campaign visit to Ward 9, Uwherun, Ward 8, Evwreni, Ward 2, Ogor and Ward 7, Afiesere, Ughelli North Local Government Area of the State, commended most of the leaders in the area, especially in Afiesere Ward for supporting their son, Olorogun David Edevbie, during PDP Governorship primary as it portrays support for their own.

Rt. Hon. Sheriff Oborevwori, who is also the National Deputy Chairman of the Conference of Speakers of State Legislatures of Nigeria, said he was confident with the massive turnout of PDP leaders, members, and community leaders at the campaign grounds that PDP will win all the contestable seats in 2023.

“My emergence as the Governorship candidate of the party was a result of the mercy of God. Primary elections are over; PDP is one, we are all one. I am your inlaw, so also your son because my grandmother hails from Ughelli Kingdom and my wife hails from Evwreni town.

“I can assure you that if you vote for me, I will not forget the people of Ughelli Ughelli North Local Government Area because my M.O.R.E agenda will bring meaningful development, opportunities for all, realistic reforms, and enhanced peace and security to all parts of the State “, he added.

He noted that he is a leader with impeccable character who has been able to rule the State House of Assembly for over 5 years without blemish unlike the past when a Speaker barely pilot the affairs of the house for three years.

The candidates, who made the assertions during the Delta State PDP ward-to-ward campaigns to Ughelli North Local Government Area Wards 9, 8, 2, and 7, said they were in the Wards to solicit for votes and on a need assessment of the area.

The wife of the Delta State PDP Governorship Candidate, Mrs. Tobore Oborevwori, while speaking in Ward 8, Evwreni, her maternal home, appealed to the people to vote massively for her husband and other candidates of the PDP in the 2023 general elections.

Hon Julius Akpovoka, speaking in Ward 7, Afiesere, said that Olorogun David Edevbie is fully in support of the Delta State PDP Governorship Candidate, Rt. Hon. Sheriff Oborevwori, and is ready to work with him.