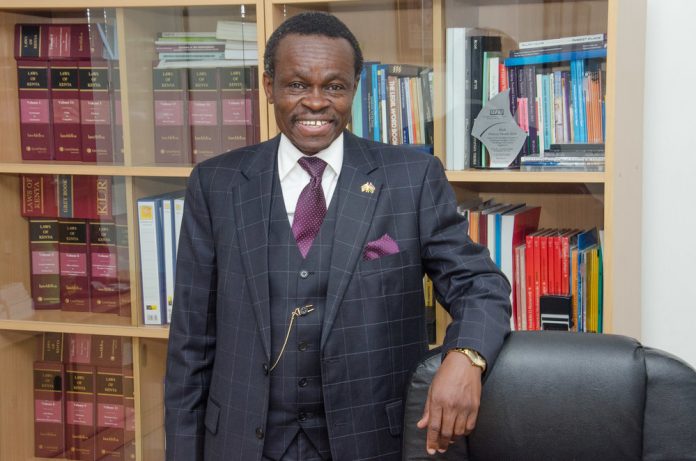 Prof. Patrick Lumumba has called on Nigerian politicians to embrace developmental leadership, as Nigeria is the gateway to Africa development.

Speaking at the 10th Memorial Anniversary of late Dr. Olusola Saraki on Monday, in Abuja, Prof. Lumumba, who was guest lecturer at the event, said if Nigeria is not at ease, no Africa country will be at ease.

Noting that Africa continent is suffering from a deficit of leadership, Prof. Lumumba said Nigerians strive well in all fields of endeavor like medical, engineers, law, science amongst others.

In a lecture titled: “Leadership and Followership in Africa,” Lumumba, who said Africa must face responsible politicking, insisted that Africa leaders must eschew ethnic and religious sentiments to move the country forward.

“Nigeria I am told is in a $500billion economy never ever be proud of that Nigerians, this is an economy that should be at least a $4trillion GDP. Whenever you reach that level, then I will say that Nigeria is doing the right thing. All the ingredients are there, the question is, why is she not realizing its potentials?

“They were leaders who were selfless. They understood that it was an honour and priviledge, they sacrificed their lives, they saw the position of leadership as leading their brethren, they never thought that they were superior to the people they led. They did not believe that they had the monopoly of wisdom and knowledge. They were leaders because they were servants.”

Lumumba who quoted past African leaders maintained that Africa must go beyond the ethnic walls to build a progressive nation.

“As Samora Machelle said, if the continent of Africa must succeed, tribe must die, and if the tribe does not die, the new nation must never thrive. In most Africa, we use those cultural differences to divide the people. We use those cultural differences to reinforces centrifugal forces and therefore threaten the very nation which we all desire. You have the duty to ensure that you are in front in order to serve and not to be served,” he said.

President Muhammadu Buhari, who also spoke at the event, said that the late Saraki participated in the evolution of the Nigerian political development by serving as a Senate Leader and a presidential aspirant of the then APP, which was one of the parties that formed APC.

Represented by the Borno State Governor, Prof. Babagana Zulum, Buhari said, “Saraki was a Nigerian stateman who participated in the evolution of the Nigerian political development by serving as a Senate Leader and a presidential aspirant of the then APP which was one of the parties that formed APC.

“He was one of them that earned the respect of many Nigerians and in particular President Muhammadu Buhari who has been always showing enormous regard for him, equally our presidential candidate Ahmed Bola Tinubu and many others have in many occassions appreciated his contributions to our polity.

“My colleague governors and I have appreciated the contributions of the late Saraki. May Allah forgive and admit him in Jannatul Firdaus.”

In his remarks the Sultan of Sokoto, and President General of the Supreme Council of Islamic Affairs, His Eminence, Abubakar Saad III, who was chairman of the occasion urged politicians to campaign honestly, like gentlemen.

He further advised politicians to convince people to vote for them and when they do get the votes, they should discharge their responsibility to the best of their knowledge.

He said: “We are interested in what happens in our country and this is very serious period with politics dominating the space and we are talking about leadership and followership by a distinguish African.

“Leaders should take such comments, as advice from people who are so concerned about what happens to the people that the Almighty Allah place under their care as leaders, so that you can discharge and acquit yourself most honorably here on earth. Because Almighty Allah will ask you when you meet him, what did you do with the life I gave you in the world.

“For leaders, we want to urge you to always uphold the truth, be honest, be transparent and be accountable because Almighty Allah will ask you. I pray our politicians so many of them are here will listen Lumumba is going to say and take some away and go and use in your campaigns.”

Earlier in his opening remarks, former President of the Senate and son of the late Saraki, Dr. Bukola Saraki, said “we know that in his lifetime, any matter that concerned any of Oloye’s numerous followers usually touched him so personally, passionately, and genuinely. His followers were his life. They formed the core of his politics and well-being.

“It is for these reasons that he spent a huge chunk of his resources to give scholarship awards to the children of many of his supporters and helped some of the followers to set up their businesses.

“We have chosen the Leadership and Followership Debate as a way of revisiting Oloye’s belief in having a vibrant, enlightened, discerning, loyal, informed, and involved followership who can hold the leadership accountable, responsible and responsive as well as take decisions that can guide and guard the leaders.”

When The Executive Council Meets

US- Africa Summit: In Whose Interest?