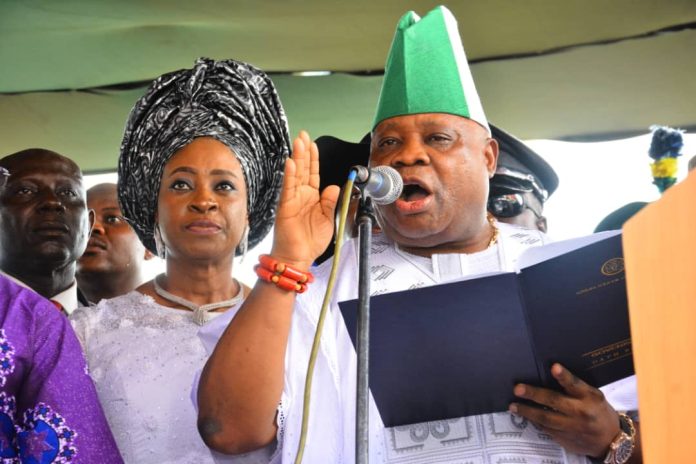 It was his first day in office and Governor Ademola Adeleke quickly turned the page on the many wrongs of the latter days of the outgone administration, signalling preparedness for governance. In his inaugural speech on Sunday, Governor Adeleke had openly committed to be “a People’s Governor” and in line with that resolve pledged to “work day and night with deep sense of purpose to be servant to you all.”

And true to that lofty resolve, Governor Adeleke began the day with a stern warning against by rival transport operators, making it clear that his government will not condone violence under whatever guise. To Governor Adeleke, violence is never an ideal way to press grievance, and gave a marching order to security operatives in the state to restore law and order in every part of the state.

While that was going on, the Governor structured the machinery of his government, swearing-into office the Secretary to the State Government, Alhaji Teslim Igbalaye, the Chief of Staff, Alhaji Kazeem Akinleye and the Spokesperson to the Governor, Mallam Olawale Rasheed. The trio resumed work immediately, taking charge of critical phases of the administration. And few minutes before 11:am, he administered an oath of office on the senior officials whose appointments were announced late Sunday. This is a demonstration of focus, decisiveness and mastery of governance vision and agenda.

“Kabo, se daadaa lo de, ati un reti re (welcome, hope you come well, we have long been expecting you) rhymes filled the air, and at a point, the elated workers insisted that Governor Adeleke come out of his car for them to see him. And as the People’s Governor he is, he acceded to their request and came out of the open roof of his car to wave at the ecstatic crowd.

The Governor had hardly settled down at a prayer session put up at the Governor’s Office when he issued six executive orders on a range of burning state issues. This followed his pledge at inauguration to “boldly correct all past injustice, corrupt acts or policies by any previous administration which are against the collective interests of our people.”

After losing the July 16 governorship election, Oyetola took many vindictive decisions, such as mass employments, appointment of Obas, among others, which were meant to frustrate the new administration. Some of these decisions are what the executive bills are meant to scrutinize, not for witchhunting, or anything negative, but to ensure that whatever decisions that had been taking was in line with laws and standard practice.

So, it is not true that Governor Adeleke sacked workers, not to talk of the range that the APC are lying about. What he did was to annul all recruitments done in the state from July 17 because they were done in total disregard for laid down processes and law. To understand better, none of the recruitments were advertised neither was a competitive screening or interviews conducted in line with known practice of recruitments into the civil service. All that happened was filling civil service positions with APC members as if it were political positions.

Those parroting sacking of a particular number of workers forget the Executive Order on Staff Audit which also set up a panel to review all employment into the public service from July 16th to date. The number one citizen of Osun State has only committed himself to due process and enthronement of good governance. His interest is to see that things are done rightly, and he is starting the first week on a good note. Given the soundness and resoluteness that went into many decisions of Governor Adeleke on his first day in office, it is beyond doubt that he came prepared for the job and will do wonder to the benefits of Osun people.

Something is also of interest. The Governor resumed early and closed late. In a rare show of commitment to state duty, special meetings were held with security chiefs and senior bureaucrats in the State civil service. A time of partnership and introduction of new security strategy were key outcomes of the meeting.

The interaction with the senior civil servants was a special engagement which went without hitch and which created a new bond of friendship between workers and the administration. The six executive orders were read to the top civil servants and their representative pledged their unalloyed support for the full realisation of the five point agenda of the Adeleke administration.

The Ede born politician has within 48 hours took charge of the state, reversing the illegalities of Oyetola era and setting new tone for the State. This demonstration of in-depth grasp of governance intricacies was a rebuke to those who think the new leader lacks the capacity to govern. The immediate delivery of corrective measures manifests a leadership that is truly prepared to act in the best interest of the state no matter whose ox is gored.

Certain takeaways from the first 48 hours of the Adeleke governorship can be reviewed as follows:

• Governor Adeleke has the capacity to govern, to act under difficult circumstances. His sudden calculated declarations to dismantle the house of fraud and illegalities of the APC marks him out as a leader capable of taken difficult but progressive decisions;

• The review and reversal of some appointments and employments point to genuine commitment for a state of due process and accountability. Illegally recruited personnel cannot enjoy the cover of legality.

• The idea of setting up review panels on various issues such as assets, contract and employment indicates the love of the governor for fair hearing. By still making provisions for such panels, the new government confirms it is not after witch hunt but compliance with the law and extant regulations;

• The warm reception accorded Adeleke at Abere government secretariat was legendary. It was electrifying. A genuine show of love was the dominant mood throughout the over four hours event;

• The reaction of the House of Assembly on the reversal to the Osun State appellation is predictable. Great news is that the House accepted existence of a subsisting judgement which is yet to be reversed. The court judgement had struck down the purported legal bases of the state law.

• The Governor seems to have more tricks under his sleeves. If within 48 hours, many critical decisions were taken, it presupposes that many great things are coming the way of Osun State;

• Last but not the least is that Ademola Adeleke has within such short period proved his critics wrong. By immediately challenging the inherited nest of evil, he fire-bombed the target and rendered a nullity a lot of areas of fears in pre-inauguration days.

●Sarafa Adeniyi is a member of Adeleke Media Team

Insurgency: Over 2,465 Children Undergo Malnutrition Treatment At MSF’s ITFC In...

The Eric Opah Challenge And Promise For Abia Governorship

Man Stabbed To Death While Trying To Stop Defilement Of Daughter