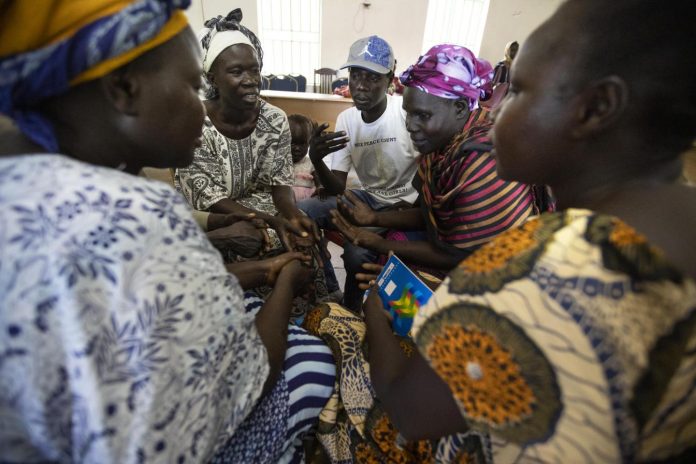 The Office of the United Nations Resident Coordinator and the UN Women Nigeria Country Office convened a high-level Orange the World Ceremony and the Lighting of the UN House to commemorate the 16 Days of Activism for the year.

During the event, the Resident Coordinator of the United Nations in Nigeria and heads of government and agencies concertedly called for policy action and escalated interventions

The 16 Days of Activism against Gender-Based Violence (GBV) is an annual international campaign. It commences on 25th November (the International Day for the Elimination of Violence against Women).

It climaxes on 10th December (Human Rights Day), indicating that violence against women is the most pervasive breach of human rights worldwide. The global theme of the 16 Days of Activism for 2022 is UNiTE! Activism To End Violence Against Women and Girls!”

The United Nations leverages the annual 16 Days of Activism campaign to draw attention to the need for concerted action toward preventing and eliminating violence against women and girls.

In Nigeria, 30 per cent of girls and women aged between 15 and 49 reported having experienced sexual abuse.  The Nigeria Demographic and Health Survey shows that 14 per cent of women in Nigeria have experienced physical violence.

Cases of violence against women increased significantly during the COVID-19 pandemic lockdown. A UN report revealed that by April 2020, cases of gender-based violence increased by 56 per cent after only two weeks of lockdown.

UNICEF reports that “six out of every ten children experience some form of violence – one in four girls and 10 per cent of boys have been victims of sexual violence”.  Notably, violence against women in the home usually involves the abuse of children and other household members.

“Another major aspect of this ceremony is the official orange lighting of the UN Building.  The light initiative is integral to the UN Women and the UN Secretary-General’s UNiTE Campaign and is used to “symbolise a brighter future without violence.”

We must sustain the momentum for a brighter future where men and women, girls and boys enjoy equal rights, devoid of discrimination and all forms of violence” said Beatrice Eyong, UN Women Representative to Nigeria and ECOWAS in her special remarks.

The 2020 Trafficking in Humans Report found that 70% of globally trafficked people are young girls and adult women. The United Nations Office on Drugs and Crime in 2019 reported that women and girls together account for 72% of all human trafficking victims detected globally, with girls representing more than three out of four child trafficking victims.

Most cases of sexual violence are not reported to the authorities. Fewer than 40 per cent of the women who experience violence seek help of any sort.  Most women who seek help look to family and friends, and very few look to formal institutions such as the police and health services.

In some cases, women who accuse men of sexual assault have faced backlash and apathetic attitudes from security agencies. The United Nations believes there is a need for deliberate action by government and security agencies to improve response to gender-based violence, prosecution, and redress for survivors.

“We are calling for an increased spotlight on the many forms that this violence can take and the culture of silence that often surrounds its victims. Much progress has been made recently with the Violence Against Persons Prohibition Act which has been passed into law by 34 out of the 36 states.

This has been made possible by the collective efforts of the government, civil society, development partners, UN agencies, and the donor community. Let this be an inspiration to us for further partnership and coordination,” remarked Matthias Schmale, UN Resident Coordinator in his welcome address.

Part of the event was an exhibition What Was She Wearing? (Curated by Education As Vaccine with support from the Government of Canada and Frontline Aids) the exhibition addresses one of the most pervasive myths of rape culture.

It also aims to create new conversations and disrupt harmful social attitudes to prevent violence and ensure access to justice for all survivors.

The event’s highlight was the lighting of the UN House in orange. The light initiative is integral to the UN Women and the UN Secretary-General’s UNiTE Campaign and “symbolises a brighter future without violence.”

The “orange” comes from the fire ignited by the many women’s groups dedicated to combating violence against women worldwide.