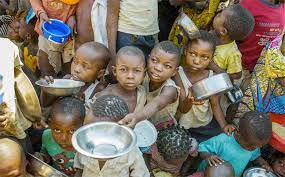 Poverty is all around us. You see it in all aspects of our lives. It is so ubiquitous that it has been ingrained in our collective psyche. We seem to have accepted it as inevitable and use it to explain our personal and collective reality. It is one condition many people work and pray hard to overcome, yet we seem not to make any meaningful progress. We have more poor people now than at any other time. Poor Nigerians are the majority , from big cities to rural Neighbourhoods. Even the minority well-off people suffer from the “poverty tax” levied on them by poor relatives, family members and friends. Statistically by 2018, we are the poverty capital of the world.

There is a famous saying in Nigeria, an untested hypothesis or supposition, that if you do not want a matter dealt with conclusively, set up a committee, which will naturally lead to several other committees till infinity. The same applies to an issue nobody wants to take responsibility for or address. The most popular strategy, evasive as it is , is to blame some phantom body, which will also blame another  body, and at the end, nobody will take responsibility, and nothing will be done. This script has found expression in the blame game between the federal and state governments on the seemingly unconquerable affliction of poverty, which is cancerous in Nigeria. One can easily argue that more people die because of poverty than any other cause of death in Nigeria.

There is a consensus by all Nigerians on our puzzling state of poverty. All available data points to the fact that most Nigerians live below the poverty line. However, the ordinary man’s experience on the street is hellish . In early 2018, Nigeria ingloriously overtook India as the country with the most significant number of extremely poor people. The 2022 Multidimensional Poverty Index survey reveals that 63% of persons in Nigeria (133 million people) are multidimensionally poor. The same Global Multidimensional Poverty Index 2022 for India shows that as many as 415 million people exited multidimensional poverty in India in 15 years (2005/06 to 2019/21), with the incidence of poverty showing a steep decline from 55.1% to 16.4%. More worrisome is that while global poverty is reducing, the reverse is the case here as more Nigerians migrate towards poverty. Why is this the case?

The first reason is that poverty has been weaponised as a form of control of people by a minority elite class that is feeding fat on Nigeria. This political and business elite class have never had it so good, and they are bent on keeping the status quo. They perpetuate poverty through corruption, poor governance, poor leadership, lack of infrastructure, lack of access to quality education, poor quality health care , dearth of economic opportunities ,lack of shelter, hunger and food insecurity, and weak moral and ethical standards. The summation of the generally poor state of everything in Nigeria is the poverty of the majority. Even the morbid fear of poverty by some in the elite class forces them to engage in primordial and wanton wealth accumulation without a corresponding value creation, leaving the system warped.

There is no genuine commitment by the leadership class to allow for the “prosperity of all” and reduce poverty in Nigeria. The local government and the state (subnational entities} are the nearest to the people and are expected to be at the forefront of confronting poverty within their areas. All their policies and programmes must be tied to growth and development that reduces poverty and improves residents’ living standards. The state government must champion the economic growth and human capital development in the state and ensure that factors of production within its area are utilized efficiently and effectively for productivity and growth and, where possible, wealth created is redistributed to reduce extreme poverty of some. poverty exists where there is low productivity. States must provide an enabling environment for production and create opportunities for their residents to be optimally productive. In Nigeria, state governments are doing the opposite.

Some engage in counterproductive actions.

The state governments have been irresponsible in project and programme initiation and execution as there is often no linkage to the human development index. Again, they need effective oversight from the state assemblies to keep them responsible. The legislatures have been captured at the subnational levels by the executive, and they are next to useless; hence governors can do as they like. No one holds them accountable for their policies and programmes or measures their effectiveness.

Their increasing reliance on federal allocation for income rather than economic activities like agriculture and industrialisation, which will spur rural development, contributes to escalating poverty. Their priorities are often not right and should ordinarily  be tailored to address the root causes of poverty. The local governments are moribund and dead in most cases. They are, at best, appendages of the state government and are controlled by the  respective state governors. This is the sad reality of our current condition in Nigeria.

China ,the acclaimed hero of the world’s most successful poverty-reduction effort successfully reduced the number of people living below the poverty line in cities to insignificance and decreased the number of rural people below the official poverty line from 775m in 1980 to 43m in 2016. China is working hard to eradicate poverty soon wholly. What did China do? The China government focussed on agriculture, capacity building and industrialization, specifically focused on certain farm produce using modern science and technology, developed businesses and industries that will use the farm products as raw materials, and built infrastructure to attract people to move to the area and create new cities.

The Fujian province is an example. The bottom-to-top poverty alleviation model is very effective, especially where there is a genuine effort from government and business underpinned by great altruistic poverty reduction philosophy.

The town has been the epitome of the philosophy of “common prosperity” for decades. The per capita net income has risen nearly 30-fold in the past 26 years. The Gobi Dessert wine industry is booming, and specific industries, such as mushroom and wolfberry farming, are attracting young people to return to their hometowns to start businesses. The village, with a population of 8,000 residents 20 years ago, was turned into a demonstration town accommodating over 66,000 residents, whose annual disposable income soared from 500 yuan ($77.53) before the relocation to 14,961 yuan ($2,320) last year.

Back to the needless argument on who is responsible for poverty , it is pointless shuffling blames as to which tier of government is responsible for our poverty burden . All tiers are in-fact responsible. I believe the Federal Government has the greater responsibility for containing poverty because they oversee financial and fiscal policy, which have implications for the economy at large. The FG has yet to be sincere in dealing with poverty, and it provides cosmetic and lips service solutions to poverty. The same policies that will grow Nigeria are the same policies that will eradicate poverty. Nigeria’s development and poverty eradication are entwined. One cannot happen without the other.

The different tiers of Government must increase the quantity and quality of the “pie” and then worry about how to share it equitably. Through its policies and projects, the FGN must create the enabling environment for economic growth through improved governance at all levels, including strengthening institutions to deliver services more effectively and efficiently. And provide capacity building both in human capital and infrastructure, increase access to economic opportunities for all, especially the poor, and improve fiscal decentralisation and socioeconomic restructuring where possible.

I vehemently believe that Nigerians do not care about who is responsible, and they want poverty addressed. It is the serial failure of different levels of government to provide the building blocks of poverty eradication that has led to the ballooning poverty . The present narrative on which tier of government front-loaded poverty in Nigeria is simply political, unhealthy, and diversionary.

What is not disputed is the prevalence of poverty and its worsening dimension. The resolution to this debate on whether the states or the federal government is responsible for the ballooning  poverty is unlikely. All tiers of government are responsible to different degrees. The challenge is who will come forward with an innovative solution to address the pervading and pervasive poverty?

The literature on poverty eradication is filled with various models adopted by different countries to fight and defeat poverty, from the rise of the Asian Tigers of the late twentieth century (Japan, South Korea, Singapore, to the modern miracles of Dubai, Malaysia, China and India, there are many examples to imitate. This begs the question of why Nigerian leaders have failed to imitate leaders of these countries and eradicate or ameliorate poverty in Nigeria. With our vast human and material resources, one wonders why we have refused to grow our economy and lift many citizens from poverty. I used the word “refused” to buttress the fact that our state of poverty is our choice, consciously or unconsciously. Most Nigerians can adequately articulate the causes of our poverty and even proffer solutions. Poverty is the lived experience of many and not an academic or intellectual exercise or construct. Why must something well-known and so perversive be so elusive to solve? Nigeria needs leaders committed to Nigeria’s economic growth and development with an eagle eye focus on eradicating poverty. Only then will we stop the blame game and tackle the challenge for the benefit of our posterity.