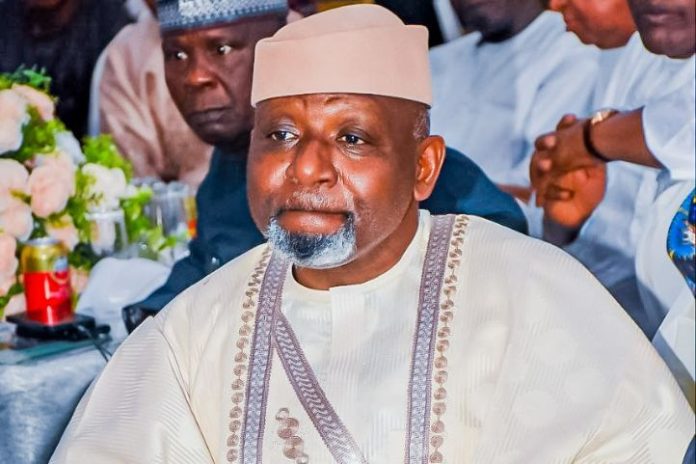 Nigeria’s Minister of Transportation, Mu’azu Jaji Sambo has been honoured by the Federal Character Commission at its first award ceremony held at Garki Abuja on Monday, December 19, 2022.
The award is in recognition of the Minister’s commitment to the infrastructural development in the country’s transportation sector and the zeal to foster unity in his sector, his home state Taraba, and Nigeria at large, which is the principle the Federal Character commission stands for.

The award which was handed to the Minister by the Inspector General of Police, IGP Usman Akali Baba, and the Chairman of the Federal Character Commission, Dr. Muheeba Dankaka, appreciated the Minister for successfully taking charge of the transportation sector–the rail, the waterways, the rail corridors and by extension the road sector.
“ Honourable Minister, you are in charge of the Road, rail, and waterways, and I must say you are doing a good job. This award is given for your outstanding services in the transportation sector, ” he said.

Similarly, the Chairman of the Federal Character Commission, Dr. Muheeba Dankaka, described the Honourable Minister as a man of integrity and a man of his word. She thanked him for his guidance, and availability and for always extolling the ethos of the Federal Character Commission.
The Minister reacting to the award, thanked the organizers of the event, particularly, the Chairman of the Commission, Dr. Muheeba Dankaka.
He also thanked the Inspector General of Police IGP Usman Akali Baba for cooperating with the Federal Ministry of Transportation in the Provision of Security along the rail corridors in the country, particularly, the Abuja Kaduna rail corridors, since the reopening earlier in the month.
He also appreciated the Comptroller General of the Nigerian Customs Services, Col. Hameed Ibrahim Ali (rtd) for his cooperation with the Federal Ministry of Transportation, noting there is room for more.

“ I must say, I am touched by this award, honestly I was indisposed, I was sending my wife to represent me hitherto, but I had to muscle up the strength to be here tonight, and I must say, I was ambushed, I never expected such a huge award, thank you indeed for counting me worthy. Thank you, my dear sister, for the Chairman, Dr. Muheeba, I am deeply touched. I want to use this opportunity to thank the Inspector General of Police, IGP Usman Akali Baba, for the Force’s commitment to ensuring safety along our rail corridors as well as our waterways, and my brother the Comptroller General of the Nigerian Customs, Col. Hammed Ali (rtd) for their partnership over the years, particularly in the maritime sector, and we look forward to more, ” he said.

We Have To Deal Decisively On Insecurity, Cost Of Governance–Peter Obi

The Time Has Come To Choose Wisely

NNPC Has Not Taken Over Road Construction, Fashola Clarifies

Chief Alema Of Warri Kingdom Announces Birth Of A Prince