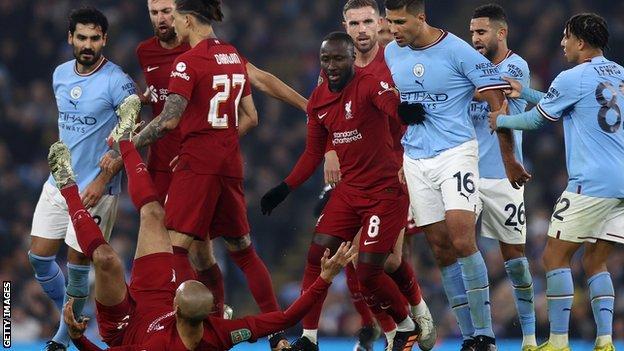 Four days after Argentina and France served up what some have claimed to be the greatest game of all time in the most important game, Manchester City and Liverpool provided their own treat at Etihad Stadium to remind everyone that English domestic football remains the most entertaining weekly dish on the menu.

Despite five goals, 25 shots and two confrontations involving City midfielder Rodri, this EFL Cup fourth-round tie will clearly not live anywhere near as long in the memory as the efforts of Lionel Messi and Kylian Mbappe in Qatar.

But, for the 50,000-plus in attendance and those watching on TV at home, after a six-week break, this was English football in the raw, the two clubs who have set the standards over the past five seasons going head-to-head. Even the managers loved it.

“It was a spectacular game,” said Liverpool boss Jurgen Klopp, manager of the losing side. “For us, it is always like this. When we are on top of our game, we push each other always to the next level. I saw the game, it was really good.”

Opposite number Pep Guardiola was in agreement after watching Liverpool peg his side back twice before Nathan Ake headed home the winner just before the hour to earn City a 3-2 victory and a quarter-final trip to Southampton.

“Liverpool and City respect what they have done in the last years,” he said. “It is not easy to keep the ball against them. They have the most difficult structure I have faced in my career. They don’t need anything to score and create chances. When they are much better they destroy you.”

Kevin de Bruyne looked a shadow of his normal self in Qatar as Belgium slipped out of the competition at the group stage, a disappointingly early exit for a side that failed completely to match lofty pre-tournament expectations.

Back in the City fold, De Bruyne looked ill at ease as he ambled around last weekend’s friendly win over Girona, even though he scored.

Against Liverpool, though, the 31-year-old was sensational. He crossed for Erling Haaland’s opener and the far-post effort that provided Ake with the winner was staggering as it dropped just over Nat Phillips’ head but perfectly for his team-mate, who was barely two feet behind the Liverpool man.

“To find the right fire inside of himself, [he needs] just to be a little bit, I would say grumpy or upset,” said Guardiola. “That is the energy inside of him.

“When this happens, what a player; run, right, assist, score a goal. He is more than a player.

“I know it is not easy to find this consistency every three days but today he has something inside that says I want to fight. When this happens it is Mr. Kevin de Bruyne.”

Phillips has played once for City since September but recovered from shoulder surgery to make two World Cup appearances for England.

However, Guardiola raised more questions about the former Leeds man with his vague explanation for Phillips’ absence.

“Kalvin Phillips is not fit,” said Guardiola. “He did not arrive in the best conditions to train.”

Guardiola confirmed Dias had injured his hamstring during Portugal’s quarter-final defeat by Morocco.

Meanwhile, Klopp said veteran former England man James Milner had limped out of the game with a hamstring injury, while Trent Alexander-Arnold was scheduled to feature, only to pull out because of illness.