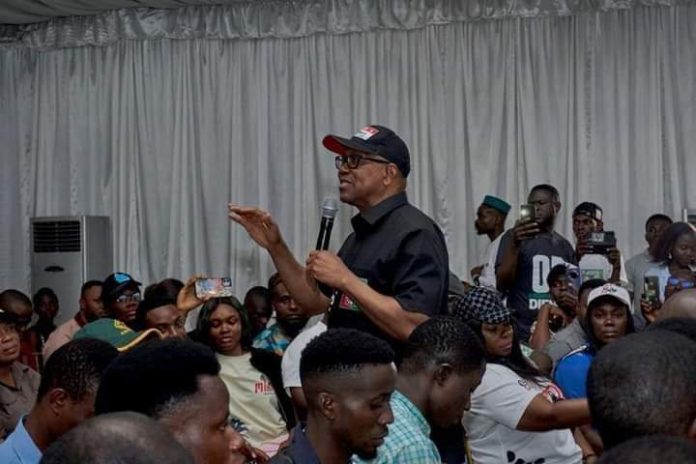 Presidential Candidate of the Labour Party, Mr. Peter Obi has said that despite all the hiccups in the country, a new Nigeria is rearealizablet requires an overriding task we should be committed to.

Addressing a crisscross-section journalists in Lagos on Sunday to mark the 53rd anniversary of the end of the civil war in Nigeria that lasted from 1967 to 1970, Obi said in a speech he titled, ‘Nation Building and the Ordered Society are imperative’, that Nigerians must accept the fact that the war is indeed ended.

“Today marks fifty-three years since the civil war formally ended. Let us accept that the war has truly ended. To try to continue to ‘fight the civil war today after fifty-three years would be a great disservice to Nigeria and Nigerians, particularly our heroes who diligently lablabored secure, and unite us. Let our rallying anthem remain: “Though tribes and tongue may differ, in brotherhood we stand.”

Obi pledged to commit the rest of his life to ensure that the civil war and the circumstances that led to it do not re-occur; and to-to ensure we build an all-inclusive and progressive society where no individual or group will be estranged, marginalized, or excluded.

“I remain resolute that a New Nigeria that we are all proud of and patriotically committed to is possible and that it is a task that must be achieved! ”

The LP standard bearer said that the task of securing and uniting Nigeria should be our only option and we all can agree that the leaders and people of different sections of Nigeria have done admirably well, particularly in the years immediately after the war.

He said that the election that is coming up in forty days, February 25th is crucial as many regard it as Mexican potential decision we have to make as a nation and particularly for our children and youths, given the sad state of our dear nation, bedeviled by alarming insecurity, unemployment, poverty, inflation, debt, hunger, disunity, hopelessness and many other indices of a failing state.

The former Anambra state Governor who regretted the loss of souls in the needless war recalled the heroic role of then-Col Olusegun Obasanjo in leading the then-then-Biafranegation to General Gowon to declare that the war was over and that the military colleagues from the Biafran side should be deployed.

Obi noted that the nation was in a hurry to heal its d less than ten years after the end of that civil war, when a committed personality from the beginning nct Biafra, Dr. Alex Ekwueme, was the Number Two Man to a most patriotic, humble servant-leader, Alhaji Shehu Shagari, who was Number One being the most strong and veritable expression of the unity and togetherness.

“This democratic leap with its unifying symbolism was glorious for Nigeria, and I deeply cherish such path of brotherhood and oneness established by Shagari/Ekwueme and truly believe that it is this path of inclusiveness and togetherness as one Nigeria we should follow today.”

He said that it will be a disservice to this generation and generation yet unborn to still harbharborifferent agenda different from the realization of a wholesome and unifying people-oriented development vision.

“From what I know of the South-East, the Igbo Nation, led by Ohaneze, has at every opportunity been unequivocal about its commitment to the unity, oneness, integrity, and progress of Nigeria, based on equity, justice, and an inclusive society. And I, Peter Obi, a proud Nigerian of Igbo extraction, I almost truthfully and wholly committed to that stand of One United, Secure and Progressive Nigeria”
That notwithstanding, Obi said that there are youths all over Nigeria who are frustrated because of injustice, poverty, lack of opportunities, unemployment, and apparent exclusion. Such youths could use anything issue or tool to express their frustration and anger like IPOB, MASSOB, Niger Delta militants and, blame it on the failures in creating an inclusive and progressive Nigeria.

“A working Nigeria with equity, justice,d fairness will also definitely and effectively checkmate such extreme groups like Boko Haram and ISWAP.

He reiterated his earlier position on tackling agitations in the country, “the best strategy for dealing with these situations manifesting in the guise of unclear nationalism, bigoted patriotism,d religious bigotry is a carrot and stick approach. NatiNation-building an ordered society is now imperative. We must wean those that can be weaned through the creation of a society where equity and justice will prevail, a society where the basic freedoms and necessities of life, such as health, jobs, skills, and empowerment are provided.”

The frontline Presidential candidate believes that the leaders of various agitation groups will stop their agitations when they see a patriotic leadership imbued with fairness, equity, justice, and a determination for a very inclusive and progressive society. Every rational human being can change when he sees a good reason to do so but noted that such incentives require the right approach, effort, and time.

Obi then described as un fan air and wrong approach as the use of the misconduct or position of one person or few persons in an ethnic group to stigmatize the entire group.

He said it’s unacceptable the level of poverty in our land today, 133 million Nigerians live in multi-dimensional poverty, 20 million children are out of school, we have neanearly% unemployment, with about 60%unemployed youths who do not know where the next meal will come from; our young people in their productive years are doing nothing, our primary healthcare system has collapsed, this should worry us and we need to come together to commence reversing them irrespective of our ethnic or religious backgrounds.

2023: For Fairness, APC Presidential Ticket Should Go To South- East...

Buhari Presides Over A Strategic Meeting In Brussels

I Have Consulted Widely Before Decision To Contest, Says Peter Obi

Fani-Kayode Is Fake, Judas Of Oduduwa, A Traitor—Gumi