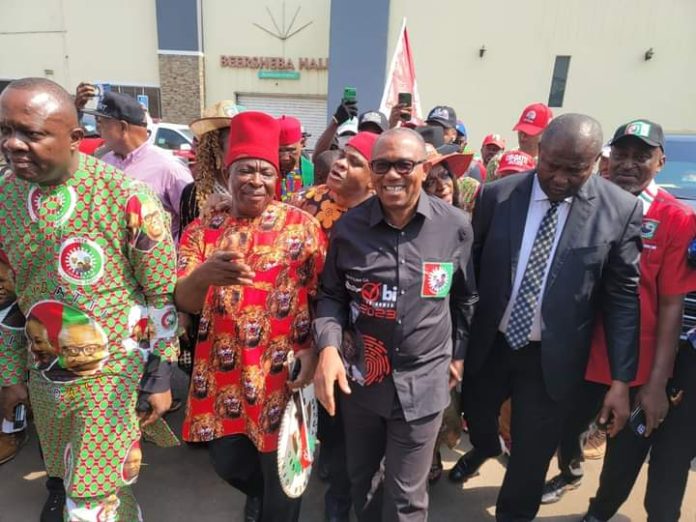 Internationally renowned writer, Chinweizu Ibekwe, has advised Igbo keaders to make contingency plan about how to receive the election result of the Labour Party Presidential Candidate, Mr. Peter Obi, one way or the other.

Chinweizu, as he’s popularly called, presented three scenerios to the possible result of the election, and said the Igbo leaders should get prepared for it.

“There is a possibility that the Peter Obi campaign result, if not properly handled, could be disastrous for Ndigbo. I therefore suggest that you guys at Anya-Ndi-Igbo should do contingency planning on ways to handle it to avoid the dangers.

“Consider these three scenarios and the dangers they pose:

“Ndigbo have a track record of not knowing how to behave safely in victory or what looks like their approaching victory.

“Examples: (a) Daddy Onyeama’s reckless and notorious boast in the 1940s that “Igbo domination is only a matter of time”; this provoked fear of Igbo domination in other Nigerian nationalities, and they took steps to prevent it.

“(b) Zik’s pointless threat in 1946 to the Brits and their Nigerian ‘stooges’;

“I must warn that when Nigeria comes into her own, and we are in power … every one of them [the stooges], indigenous or alien, shall be held to strict accountability and shall be impeached for high treason against the safety of the State of Nigeria.”

“Of course, forewarned, those he threatened made sure to deny him power.

“(c) A bloody and ominous example is the spontaneous triumphalist reaction by Igbo masses in January 1966 to the UPGA multi-ethnic coup that Nzeogwu publicly led.

“The unwise pattern of killings helped create the false impression that it was an Igbo coup. Furthermore, the boastfulness of the Igbo masses together with their thoughtless taunting of their hosts in the North and their insensitivity to the possible perception of the coup by other Nigerians helped trigger the countercoup and pogroms.

“So, given their character and lack of a wise and centralized leadership, how are Igbo likely to react to an Obi victory? Will some try to appropriate and turn the Obi-dients Movement into an Igbo affair? An Igbo project? What should be a wise response? How can Igbo, both the prominents and the masses, be trained to follow a wise path?

“The danger here is that the Igbos may feel even more desperate about their plight in Nigeria and rally totally behind the Biafra agitation and its brainless leaders. If that happens, the damage being inflicted in Igboland by the Simon Ekpa followers and enforcers will intensify.

“So, once again, the question is: how are the Igbos likely to react to an Obi defeat? What should be a wise response? How can they be trained to follow a wise path?

“Should Obi emerge as winner, it is most likely that some anti-Igbo politicians will attempt to neutralize him and his movement by whipping up Igbophobia. And should Obi lose, some anti-Igbo politicians are likely to seize their opportunity and push for a final solution to what they see as their Igbo problem by stomping their boots on a people they’ve knocked to the ground.

“So, once again, the question is this: how are the Igbos likely to react to an anti-Igbo campaign triggered by an Obi victory or defeat? What should be a wise response? How can they be trained to follow a wise path?

“I suggest the Anya Ndi-Igbo leadership should give these scenarios their urgent attention and work out safe solutions and carefully guide Ndi-Igbo to successfully implement them.

“Anya Ndi-Igbo might consider quietly sending cautionary advisories to leaders of Igbo organizations asking them (1) to educate their members about these dangers and (2) to urge their members to exercise restraint and self-control and not go firing off unguided missiles into the arena of public opinion.

“The Igbos should keep to themselves their personal opinions on the matter and let Anya Ndi-Igbo orchestrate public statements on their behalf.

“And by orchestrate I mean this: Anya Ndi-Igbo should play the role of a coach who, while staying out of the playing field, makes the game plan, watches the game closely, works out moves and signals them to the players on the field. In this case, it should give prepared statements to selected organizations and persons to make publicly.

“I hope that helps.”

It’s Mandatory Osinbajo, Amaechi Support Tinubu As They Benefited From Him,...